Before we dive into the reviews of Monday’s performances by The Voice’s Top 12, let’s have a moment of silence, why don’t we, for the vocalists that we only wish were still in the contest. For me, it’s Kelsea Johnson, who never just sang a song, she put on a show. For some of you, it’s WILKES, who’d earned the right to spell his name in all caps; for others, Terrence Cunningham, who’d perhaps gotten weighed down by his big bag of tricks. Whichever coulda-been-a-contender it is that you were missing Monday, you can vote for them in one of the polls that follows this recap. Speaking of which, let’s get it started… 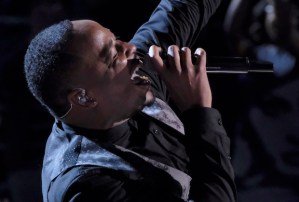 Rayshun LaMarr (Team Adam), “When Love Takes Over” — Grade: C | In rehearsal, Rayshun’s coach suggested that he was coming off a bit sharp. I might’ve countered that, as much as I like Rayshun, he was sharp enough to make my ears feel like they’d been stabbed. On stage, he was, as we’ve come to expect him to be, a ball of energy. However, his performance felt as unfocused as it was enthusiastic, and vocally unconvincing. He ended on a strong note, but this wasn’t the same caliber as his showstopping “I’m Goin’ Down.”

Kaleb Lee (Team Kelly), “Amazed” — Grade: B | Are there really so few songs that The Voice has to keep cycling through the same ones over and over? Just last Season, Adam Cunningham’s excellent version of Lonestar won him a Save, and already, Kaleb was doing it. At least it was his choice, and more importantly, he did it pretty well, building up his vocal from tender to passionate with an open-heartedness that you didn’t doubt for a minute was sincere. Not a flawless performance but nonetheless impactful.

Jackie Foster (Team Alicia), “Toxic” — Grade: C | Jeez, I so wanted to love Jackie’s down-and-dirty rock reinvention of Britney Spears’ smash (which she’d perfected with her band before ever coming on the show). But between her eyebrow-raising phrasing and more pitch problems than a baseball team on a losing streak, this wasn’t at all the home run I expected it to be. Jackie seemed to hit her stride toward the end, but by then, it was too late to really salvage the performance. Methinks she’s lucky she’s a fan favorite. 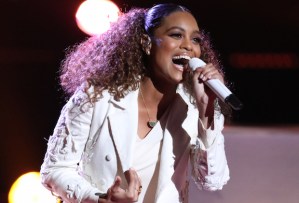 Spensha Baker (Team Blake), “Down On My Knees” — Grade: A- | Spensha definitely has in her voice the warmth that a listener would want from this Trisha Yearwood heart-tugger. And in rehearsal, it sounded like she was going to nail it, in the process, restoring my faith in her tremendous potential. When she took her turn on stage, she didn’t disappoint. This was the Spensha that originally blew my mind! This was the Spensha who could go Final Four! Blake said it was because she’d managed to stave off her nerves till the end of the song. Whatever the reason, please, let her do it again and again!

Christiana Danielle (Team Alicia), “Say Something” — Grade: A | Though I’m crazy about Christiana’s eccentricity and style, I’m not so nuts about the way that she’s sometimes seemed to think that singing in key is optional. Here, she made me forget any criticism I might have ever had about her. She wasn’t just on point, she was magnificently on point, singing with a disarming vulnerability and, ultimately, a power that left my jaw on the freakin’ floor. Suddenly, I could hear why Alicia kept Christiana over Kelsea and Terrence. Wow.

D.R. King (Team Kelly), “White Flag” — Grade: C | When I think of D.R., I think of vocals powerful enough to blow out a speaker or two, not restraint and tenderness, which are rather what this Dido song calls for. Even he admitted that it was a “left-fielder” of a choice for him. But I had to admit, when he started off singing a cappella, it sounded beautiful. Unfortunately, it was downhill from there. As it seemed like Blake was trying to explain after the helter-skelter performance, D.R. can sing a lotta different ways… but maybe it’s not the best idea to try to squeeze in every last one of those ways in a single number. 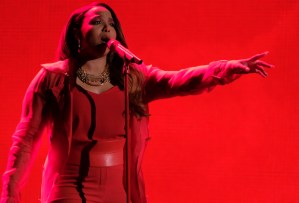 Sharane Calister (Team Adam), “In My Blood” — Grade: B+ | Going arguably bigger and ballsier with her Shawn Mendes cover than even Shawn himself went with the song, Sharane turned in a performance that at times got so aggressive, it felt like she was reaching through the TV to grab me by the shirt and say, “Can ya hear me now? Well, can ya?” It wasn’t pitch-perfect, and at one point, she descended into that yelly-ness that always bugs me from Jackie Foster. But the overall impression she gave was, “I will not be denied.”

Pryor Baird (Team Blake), “Pickin’ Wildflowers” — Grade: A | After his disastrously straightforward cover of “9 to 5” in the Live Playoffs, Pryor was primed for a comeback, and darlin’, this. Was. It. Back to spitting tacks like a human nail gun, he went full-on country and then some, covering Keith Anderson with a blistering intensity. He was like a chainsaw singing us a love song. If he keeps going hard like this and especially if he keeps going country hard like this, a spot in the Final Four is his for the taking.

Brynn Cartelli (Team Kelly), “Up to the Mountain” — Grade: A+ | I might have said that it seemed mean to have Brynn tackle this whopper of a Patty Griffin song that had been done so memorably by not only her coach but Season 12’s Brennley Brown — except for the facts that (a) the 15-year-old picked it, and (b) she has the chops to handle it. She sounded like a million bucks. Like just preposterously good. And she had the smarts to know that her big notes would sound even bigger if she threw in some soft notes to contrast them with. Seriously excellent. 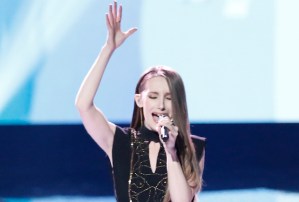 Jackie Verna (Team Adam), “I’m With You” — Grade: B- | Since I’ve so often complained about Coach Adam’s song selections, I have to give him props for so enthusiastically backing Jackie doing this countrified version of Avril Lavigne’s ballad (a la Cassadee Pope). Yes, Jackie went for a few notes here and there that remained frustratingly out of reach, but overall, this was a strong performance stuffed with full-bodied showstopper-y notes. I’ve previously felt like she was straining herself vocally, and here, well, I guess I did, too. But if the struggle is real, in this case, it also paid off pretty well.

Britton Buchanan (Team Alicia), “Small Town” — Grade: C+ | As wonderfully bluesy as Britton’s voice is, I thought it was kind of a misstep for him to opt to go country (even if it was John Mellencamp country-pop). The performance was by no means a disaster — it was, if slightly karaoke-esque, fine. It just didn’t showcase either Britton’s vocals or his charisma as well as his previous numbers have. On the plus side, I did understand a lot more of the lyrics when he sang them than I ever have on the artist formerly known as John Cougar’s original.

Kyla Jade (Team Blake), “One Night Only” — Grade: A+ | After getting a break-a-leg call from JHud, for whom she used to sing backup, Kyla got on that stage and slayed her Dreamgirls number. Whatever hide-in-the-shadows backing singer baggage Kyla might have brought to this contest (that had previously held her back) she has most definitely shed. This was a go-for-broke, bring-down-the-house showstopper. If this doesn’t chart on iTunes Tuesday, I’ll eat my remote.

So, which of the Top 12 most impressed you? And which eliminated contestant did you spend the evening wishing was coming up next? Vote in the polls below, then hit the comments.