Many a Lucifer viewer is feeling as jilted as the Devil himself, given what we witnessed in the closing moments of the April 23 episode.

Inspired by the romance at the heart of the Case of the Week and given a deciding nudge by Dr. Linda (“What do you truly desire?”), Lucifer “runs, like in a proper romantic comedy way, to Chloe’s house and is met by a terrible surprise,” recaps co-showrunner Ildy Modrovich. “He’s met with Pierce, down on one knee, with a ring in his hand. And Chloe says yes.”

In other words… “Lucifer missed his window,” affirms co-showrunner Joe Henderson. “He finally came to this realization, that he needs to tell Chloe how he feels, and he’s too late. And so the next episode really picks up with him trying to figure out what his next step is, and everyone is sort of saying to him, ‘Why don’t you just tell her how you feel?'” 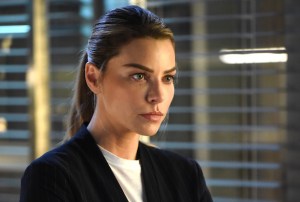 Alas, just as he botched that beautiful, candelit chateaubriand meal, Lucifer “in typical Luciferian fashion” will process his flood of emotions “in a wonderfully unhealthy way,” Henderson laughs. Adds Modrovich: “He tries to understand what Chloe is looking for that he can’t provide her with and he’s doing a little bit — stress on little, because he’s Lucifer — of soul-searching, trying to understand his part in it of what he did wrong.”

Chloe, meanwhile — though she said yes to Pierce’s popped question — might also be wondering what went wrong.

Says Henderson, “Chloe is exploring to a certain extent, ‘OK, this guy [Pierce] represents everything I’ve sort of wanted out of a partner’ — and to a certain extent that should be the perfect person for her. But there’s also this draw to Lucifer obviously.”

Luckily, while these two knuckleheads continue to drop and/or miss signals, other interested parties are poised to ‘ship “Deckerstar” hard. 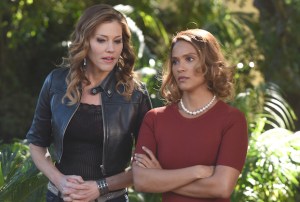 “Amenadiel has thought pretty much all season that God is testing him to sort of have Lucifer’s back and watch over him. And of course Charlotte is trying to gain her way into Heaven,” Henderson notes, “so she ends up teaming up with Amenadiel to try to somehow get Lucifer and Chloe together, because they both think that’s God’s will.”

Alas, there’s another party whose agenda runs counter to that.

“Maze is trying to get Pierce and Chloe together, because her whole plan is if Pierce falls in love, his mark will go away, and she can go back to Hell,” says Henderson. “The problem is Pierce is keeping from her the fact that his mark is already gone!”