In the wake of Team Flash‘s first (failure of a) clash with The Thinker, it is now all hands on deck — and then some — as Barry struggles to thwart his adversary’s thus-far mysterious end game known as The Enlightenment.

“There’s a lot of guest cast in this last run, and it all plays into the DeVoe storyline,” executive producer Todd Helbing tells TVLine. “Anytime we get an opportunity to bring any of these guys back, we do it.” 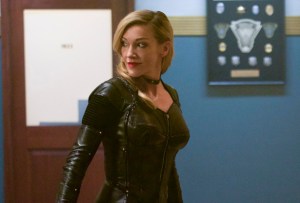 Viewers first met Leo Snart in last fall’s four-show crossover event, and he has since then stopped by Legends of Tomorrow before heading back to his Earth to pop the question to beau Ray “The Ray” Terrill. (Asked about the ring Leo now seems to sport, Helbing would only say, “We pick up where Legends dropped him off, so to speak.”) But Citizen Cold is not the only Earth-Xer taking part in this week’s episode of The Flash. No, we also will meet for the first time Arrow heroine Laurel Lance’s doppelgänger from that war-torn universe, dubbed Siren-X (played by franchise vet Katie Cassidy).

“She’s sort of the last remaining fighter of the Nazi regime, so she’s got a big chip on her shoulder,” Helbing previews. And as for how she stacks up against the similarly sinister Black Siren currently confounding Team Arrow, “Her powers are pretty similar, but there’s one new thing that she can do with those powers that we’ve never seen any version of her do before.” 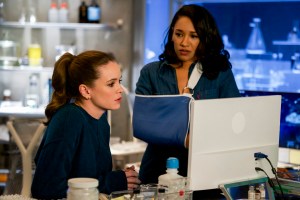 Concurrent with this week’s Leo Snart/Siren-X story, Caitlin is mourning the loss of her Killer Frost alter ego (“She’s on the hunt to get her back scientifically, or some other way”), while Cisco comes to suspect a trouble with Harry, who last week overcharged his “thinking cap” with dark matter.

Having suffered that massive jolt, “Harry’s not as clear minded as he normally is,” Helbing says. “Cisco warned him not to use the thinking cap, but he didn’t listen to that advice — and he put dark matter in it. And that’s going to have a big effect on the thing that Harry values most, and that’s his intelligence.”