This topic has been brewing for a while, but seeing Hawaii Five-0‘s Tani whip around a tray of hot coffees as if the cups held nothing but air forced my hand. Why are the props filled with air?

I mean, so ongoing has this deception been, Myles McNutt created an entire “#EmptyCupAwards” Twitter hashtag to chronicle TV’s conspicuous java errors. (Watch his related Slate video at bottom.)

Of course, there are practical reasons for keeping a hot coffee out of actors’ hands. Microphones possibly picking up the sound of swishing was an original concern. Multiple actors I reached out to, meanwhile, echoed the conventional wisdom that nobody — wardrobe departments especially! — wants to risk a brown beverage splashing around sets and clothes.

Besides, one person noted, “Actors are hired to act, and [the] props [department]  figures that we can act like the cups are full.” (True — though it seems like some could benefit to repeat that specific course at Stella Adler!)

Many actors, it should be noted, do make a point to have something in their take-out cup — be it water, tea or their wake-up drink of choice. Doing so sells the sip, “while a little caffeine boost is a bonus!” says one primetime star. Adds another: “I always have water in my cup, because I want things to be as real as possible.”

Sometimes, the props department will even go the extra mile to keep things “real.” Says Bridget Regan, whose current TV credits include Jane the Virgin and The Last Ship, “I have worked with some absolutely above-and-beyond props men and women that have offered to fill my mug with Americanos, almond milk lattes, etcetera — and topped me up throughout filming until I am so jacked up on caffeine, I’m dancing around the set like a high squirrel.” (Which is a fantastic visual image.) 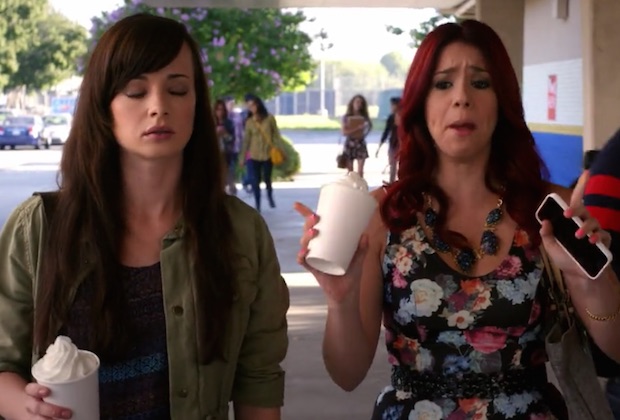 The fact remains, though, that a lotta the cups we spy on TV are obviously bone-dry, weightlessly teetering around in cardboard trays before being set down on the ledge at the nurses station with a tell-tale hollow plok! sound.

For what it’s worth, those who make TV are aware that this jig is up.

“As more people complain about obviously empty cups, I and others have insisted on having liquids in cups onscreen,” says Shawn Ryan, whose current productions include CBS’ S.W.A.T. and NBC’s Timeless. And looks, he notes, can sometimes be deceiving. So think twice before roasting a TV show over its seeming cups of no-joe.

“I had a S.W.A.T. episode that came in recently where I saw an actor with a cup that seemed obviously empty…,” Ryan shares. “When I complained, I was assured the actor had liquid in his cup. So I saw an ’empty cup’ where there was none! Maybe we’re all looking for empty cups now, and projecting our biases onto them? Who knows!”

Something to wrap our hazelnut-flavored beans around, for sure.