Unless this was your first time watching Scandal — in which case, “Yum, yum, Crispy Piggy!” — you probably entered Thursday’s finale with a finite set of questions. We sure did. 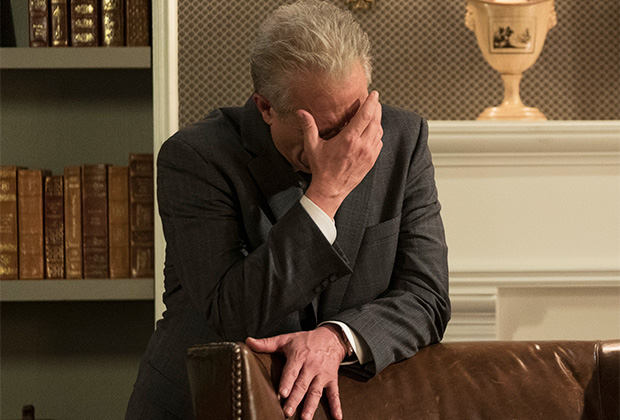 Just like the half-dozen finales that preceded it, Thursday’s series ender promised all the trappings of Shondaland, from game-changing revelations to at least one shocking death. And while we didn’t get everything we wanted — the fact that Cyrus Beene still breathes is proof of that — the episode kept up its end of the bargain, more or less.

Olivia & Co. made good on their vow to come clean, spilling seven seasons’ worth of their guts in a special Senate hearing. (My personal favorite confession was Huck struggling to add up all the murders he committed on B613’s order, eventually settling on “…a lot.”)

This sent Jake into Chicken Little mode, which we learned when he approached David with concerns that “the sky is falling — literally falling!” But David refused to let Jake off the hook, standing tall and putting the big, handsome bully in his damn place. (“You’re the bitch. You’re always someone’s bitch!”) Unfortunately, this sudden burst of courage set off a series of events that ended with Cyrus poisoning David and suffocating him with an ornate pillow. (“No hard feelings!”)

David’s death affected each of the Gladiators differently — Darby Stanchfield gave a particularly powerful performance in that morgue scene — but no one’s outcome was as sexy as Olivia’s. After delivering one of her trademark speeches about how she’s been the problem all along, Liv realized that she and Fitz might only have one night left together, leading to an ultimatum: “Feelings… or something else?” It took him a minute, but Fitz eventually settled on the latter: “Take off your clothes.” And off they went.

Then came the father of all twists: Rowan popped up as a surprise witness, taking full credit for creating B613, but explaining that he did so in response to a need: “I did so because of you. All of you. The ones in charge, the ‘masters of the universe.’ White men, whose complacency — whose privilege — left this republic in a state of neglect.” He also made them an offer: “You need to give them Command, but that doesn’t mean you need to give them me.” (Guys, I’m not a lawyer, but… what?!)

And by the magical logic of Scandal, all was suddenly right with the world: Jake Ballard was off to the slammer, Mellie somehow got credit (even from Sally Langston!) for bringing B613 to light, and Cyrus agreed to sign a pre-written letter of resignation. But when Mellie turned to Liv to discuss their next steps, she responded by saying something she’s been waiting 124 episodes to say: “I’ve spent enough time helping people clean up their messes.”

So she’s off to do whatever she wants (her words) with Fitz, but at least she left a piece of herself behind: 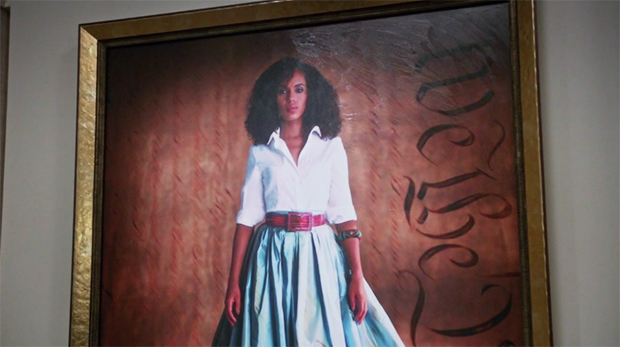 * Prior to facing the Senate, Quinn finally got to face her fiancé — sorry, make that husband. Yes, Quinn and Charlie swapped “I do”s during a conjugal visit, easily the most romantic prison-set moment in Scandal‘s storied history. Finding out that Charlie’s real name is Bernard (“It’s a family name!”) was just the icing on the wedding cake… which they didn’t have time to pick up, apparently.

* Sadly, David wasn’t the only major loss in the finale — it was also a tough break for all you Lonnie fans out there. Cyrus’ former henchman took his own life before Olivia’s very eyes.

* Shonda Rhimes hinted that a few familiar faces would return in the finale, and she wasn’t lying. In addition to getting to enjoy Sally Langston’s soothing news narration one last time, the hearing also brought back Hollis Doyle and Tom… Tomson? (Does he have a last name?)

* Not only did Mellie make good on her promise to tackle gun control (R.I.P., Lonnie!), but she did so with Marcus by her side.

Your thoughts on Scandal‘s final hour? Grade the episode below, then drop a comment with your full review.