It’s good to be a bit bad, Katie Cassidy has come to realize during her latest Arrow run, as Earth-Two’s Laurel Lance aka Black Siren.

“Looking back, from when we started the pilot to the end of Season 4, I took it so seriously,” she candidly shares of her original stint on the CW drama. But as the onetime Black Canary’s unpredictable doppelganger, Cassidy has let herself let loose, and the result she says has “been a blast.”

During our recent visit to the Arrow set, TVLine sat with Cassidy to talk about the vexing guessing game “Evil” Laurel has been playing with “dad” Quentin, survey her alliance with Ricardo Diaz and ponder the idea of total redemption for that minx of a meta.

TVLINE | In this midseason stretch of episodes, you’ve had more to sink your teeth into — whereas at the start, Evil Laurel was kind of, like, just looking fierce and stuff, strutting, sneering…
…screaming….

TVLINE | Do you feel like these more recent episodes have given you so much more to work with?
Oh, yeah. Absolutely. It’s so funny — I literally just spoke to [co-showrunner] Marc Guggenheim about this, because as an actor I want to continue to be challenged or grow, creatively, and that’s what’s these writers literally did for me, from Season 1 to the end of 4, and then I came back a bit for 5 and now it’s 6…. I’ve been really fortunate, so I love it. It’s almost like the devil’s playground, is how I think of it. 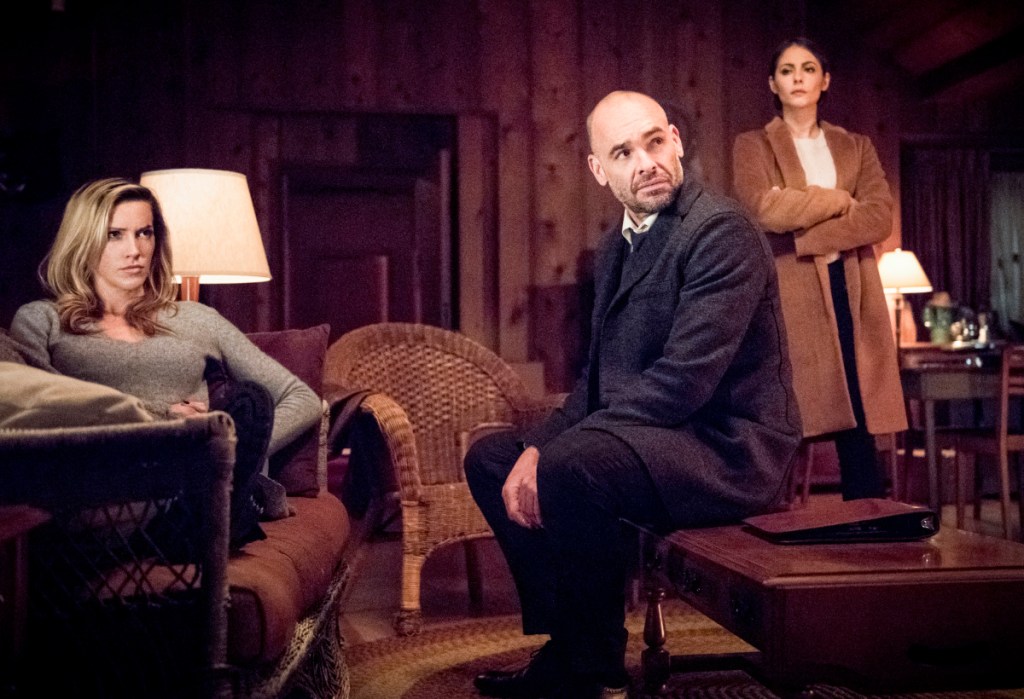 TVLINE | Now we get to see Laurel’s wheels turning. One scene that stuck with me was when she was holed up in the cabin with Quentin (played by Paul Blackthorne), sitting on the couch, and then at one point you almost “flip a switch” and snark, “Thea’s right, Daddy” — and you realize she was playing him the whole time.
Right, right, right. I know what you’re talking about. The thing that I think is interesting about this character is I do feel like there is room for redemption in some aspect. However, we don’t know what her life has been like on Earth-Two; we know bits and pieces, and that’s what I think is interesting about playing this character, how we keep finding out more and more information.

I’ve built a backstory off of script analysis and character breakdown, and while it doesn’t always match up, that’s part of the fun of it, just creating and being able to play — and these writers and producers certainly have been willing to do that with me. This is the stuff I thrive off of. I just love strong female characters in general, not necessarily because, “She’s evil” or “Oh, because she’s good.” Yes, of course it’s fun to play evil, but it’s simply fun to play any different characters.

TVLINE | It’s fun just to play complicated…
Exactly. And that’s what’s cool about Earth-Two Laurel — she’s kind of a loose cannon. You don’t really know what she’s going to do.

TVLINE | Every time we start to think, “Hmm, maybe Quentin was right, maybe he’s getting to her,” the rug gets pulled right out from under us. That said, do you think that maybe there is a half of a half of a seed of something good inside this Laurel, that can be cultivated?
As I said before, I do think there’s room for redemption — although maybe, personally, I’m just too forgiving of a person. If someone killed [someone else], you can’t forgive that kind of stuff here on our Earth, but definitely I think there’s room for redemption. I think she has a lot of explaining to do and understanding, and yet…. She’s kind of a wild animal. It’s almost like inside of her there’s this wild animal in a cage that wants to come out, and she wants to let it out, but also I think that she’s sort of torn internally, because I don’t think she was born this way. I think things happened to her that made her this way.

TVLINE | That’s why I think that the most interesting place for this to lead would be to have her be kind of a “frenemy,” versus full-on redemption. Don’t put her back on the team in a new suit, but in a pinch, you know, we could call on her.
Maybe she moves to the city next door? [Laughs] We’ll be on Wednesdays at 9 pm and she has her own sort of vigilante thing going. 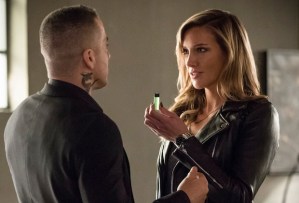 TVLINE | How would you describe Laurel’s dynamic with Diaz (Kirk Acevedo) ever since they formed this alliance of sorts at his weird little dojo?
He keeps her on her toes. He makes her surprise herself, doing things she didn’t necessarily expect. I think that there’s a magnetic sort of, like, fire between them. What that reads as, I think time will tell.

TVLINE | It sounds like in Episode 19 (airing this Thursday at 9/8c), when they meet up with The Quadrant (a coalition of crime families), Laurel is going to start having some second thoughts about Diaz’s grand plan, or his means of going about it.
Ultimately, as she’s learning more and more and watching Diaz and how he works, she’s horrified because he’s brutally murdering people. There’s no rhyme or reason, which is disturbing. And although she has had that in her before — when need be, she’s been able to take down some people — it’s hard for her to watch and stand by this person. Plus, she does have this interesting relationship with Lance, with Quentin. Both of these characters [Quentin and Diaz] are making her question herself in different ways almost, almost like the angel and the devil. She’s caught between a rock and a hard place. 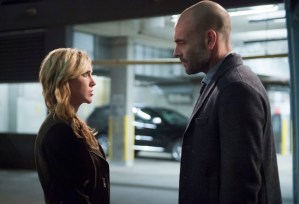 TVLINE | Has it been difficult to be so mean to Paul [Blackthorne]?
Yes, but it’s also been so much fun. And I think that he quite enjoys watching the difference in my character. [Laughs] The scene where she comes in and is like [in dainty voice] “Hiiii, I’m Laurel Lance!”? So much fun.

You know what it is? Looking back, from when we started the pilot to the end of Season 4, I took it so seriously — as you should, obviously, in continuing to be a professional. But I think also just life I took so seriously, and I was just…. I mean, I’m very dedicated, and I gave everything I had, but it’s fun when Black Siren makes jokes about that Laurel. It’s kind of like making fun of myself, and that’s been a blast.