The following contains spoilers from the Season 1 finale of The CW’s Black Lightning.

Jefferson Pierce’s superhero alter ego, Black Lightning, managed to survive a multi-pronged assault in the CW series’ freshman finale. But is his biggest battle yet to come, from the inside of a briefcase?

The Pierce family was able to lay low for a bit at Gambi’s cabin in North Freeland, while Jefferson recovered from the near-fatal blow dealt by Khalil aka Painkiller. But once rogue ASA bigwig Proctor was able to track the family’s location, his team of operatives stormed the place. Jefferson had awoken minus his powers, forcing the group to adopt a Plan B, in which Gambi would lay cover fire while the others slipped into a tunnel. But after one super-charging hug from daughter Jennifer, Black Lightning was ready to crackle, with Thunder clapping at his side!

After besting the soldiers, Black Lightning & Co. confronted Proctor at the site where he had the Stage 2 pods stashed. Proctor, having confirmed the hero’s identity, claimed to now hold all the cards, but Gambi had an ace up his own sleeve  — in the form of a fatal bullet. Lynn then set out to save the remaining pod kids if possible, while Tobias Whale got his hands on the high-value briefcase that Proctor left behind in the bunker. Using the dead man’s severed thumb to unlock the case, Tobias was quite pleased with what he found inside, enough so that he dubbed himself the “King of Freeland” to henchwoman Syonide (who, by the by, we learned has carbon-fiber body armor sewn into her skin!!!). First order of business? “Ripping the damn light outta Black Lightning.”

TVLine invited showrunner Salim Akil to reflect on Black Lightning‘s freshman run, its obstacles and surprises, and then give a hint at the Season 2 plan.

TVLINE | Looking back, what were the biggest challenges for Season 1?
Maintaining the structure of the season. Making sure that we kept it as grounded as possible but to entertain as well. We wanted to make sure that we were talking about things that people experience or see or read about in their everyday lives. Keeping our eye on the ball throughout the 13 episodes and learning, because there was a learning curve. I had never really done anything with that much VFX (visual effects) before, so balancing the storytelling was a great challenge. And was a really good challenge because, artistically, from a writing and directing standpoint, it really got all the writers and the directors focused, and they really were enjoying the things that they were doing.

For me, storytelling, I always had to remember that they had superpowers. I was always making and writing stories that didn’t involve their powers, so I was like, “Oh, yeah, we’ve got to shock somebody. OK. Got it.” 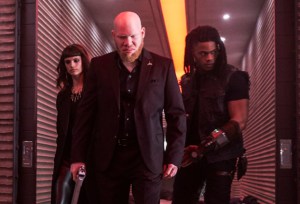 TVLINE | Was there anything that sneaked up on and perhaps pleasantly surprised you — a storyline or a character that popped?
I knew that Marvin [“Krondon” Jones III, who plays Tobias Whale] was good, and that he was an actor, but he didn’t have a lot of experience. And so I thought that there would be some areas where I would have to sort of support him and help him and guide him. But man, first day, he hit the ground running, and so I was so happy about that. I never had to protect him in any way or hide this or hide that with music or with a shot, you know? He was just all out from the beginning, a pleasant surprise and he worked very hard.

TVLINE | I loved his scenes with Lala — you just never knew what he was going to say — and with Syonide, where you always sensed that these two had been in the trenches for a while together and totally knew each other.
We were happy to finally be able to sort of explain some of [the Tobias/Syonide] relationship through that last conversation with Gambi and Jennifer where he says, “They found her in a dumpster with an umbilical cord wrapped around her neck….” We kind of got into what their relationship is really like, how they met and what she means to him. 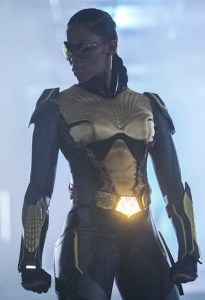 TVLINE | I thought it was interesting that with Season 1 you chose to dive into not just Anissa’s powers but also Jennifer’s. What was the thinking behind that versus perhaps holding off on one of them for now?
You know, there are times in television where you can play jazz, where you sort of find your way to a place, and with Jennifer that’s what we did. We were playing rock and roll with everyone else — you hit the stage, you’ve got to burn, right? With hip-hop, too, you don’t have time to work your way up to it. With Jennifer, I just wanted to play a different tune, and her powers exhibited themselves at the right moment, in full, when she saved her dad’s life. I had that image in my head from the beginning of the season. I didn’t know exactly what the story was going to be, but I always had that image in my head of the child saving the parent. And we finally found a way to get there. 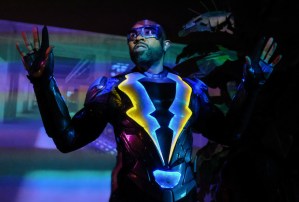 TVLINE | Music has been such a big part of the show. Do you have a favorite song choice that you used for a scene?
Oh, man…. It depends on what mood I’m in. “Kung Fu Fighting” made the cut at the beginning of one of the shows [Episode 8], and that’s a fun, fun song. And then the Donny Hathaway song, “Ghetto,” when they go and destroy the Green Light lab. And the Jack White song [“Lazaretto”] in the first episode, that has stuck with me from the entire [pilot] presentation.

I love them all, man, to be honest with you. There’s no favorite. I just love being able to introduce new songs, and also classic songs, back into the culture. 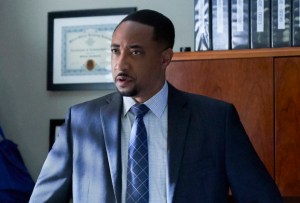 TVLINE | A lot of superhero showrunners talk about how it’s more fun to let characters in on the secret than to hide it from them. Were you tempted at all to loop in Henderson in Season 1? I thought you were about to do it a couple of episodes ago, but… nope.
I was. I was tempted, but I felt like we were giving so much in the first season. To your point about Jennifer getting her powers and Anissa getting her powers, and revealing stuff about Gambi. We were giving so much information, so I was just like, “Let me put this one in my back pocket for now.” We’ll have plenty of time, God willing, to do that.

TVLINE | What do you want to say about the Season 2 plan? I feel as if what Tobias found in the briefcase is not what the pod tech thought was in the briefcase. Am I right, or…?
Let me see…. How can I answer that without giving it all away? You know what, we planted what’s in that briefcase in a few episodes. And what I will say about the second season is I think I’m going to try to do it in a way that allows people to almost “read a comic,” you know what I mean? The season will arc out in a different way. This season, we had a long-arching arc that ended with Tobias opening [the briefcase]. This season, I wanted to go with the theme of books; in our titles, I did a lot of “books of this” and a lot of “books of that,” and so I just want to do one title for certain arcs. I’m still trying to figure that out, but I’m excited about it, man, really.

TVLINE | So maybe Jefferson is dealing with one particular thing for three or four episodes, and then Tobias rises back up again for four or five episodes and that becomes a thing…?
Yeah. Yeah. I’m really, really excited about the possibilities, really excited that people took to the show in the way that they did. It’s very pleasing. It’s always good to do a show, but it’s even better when people enjoy it and get it and have fun with it.

TVLINE | Are the pod kids necessarily gone, or might that be revisited?
No, we’ll still talk about the pod kids. That’s still on the table. Lynn did say that she knew someone that could help them….