This week on Fox’s Lucifer (Mondays, 8/7c), Chloe’s relationship with one of the men in her life heats up — but to what possibly “shady” end? The detective will also confront her partner in crimesolving about his meddling behavior, and in what exactly it’s rooted.

Here, Lauren German opens up about life on the Lucifer set, before diving into the dilemmas soon to confound Chloe.

TVLINE | The Lucifer cast seems very close, judging by social media. What role do you fill within the group? Are you bawdy? The irreverent one? The wild card?
I’d say that, at least on set and work-wise, I’m the most immature and prankster-y of the bunch. People might not really get that, because I get quite shy when I’m around crowds or new people, but with close friends and family — and that’s what our crew feels like — I’m definitely always the one trying to get a laugh. Tom [Ellis] and I work on screen the most of everyone, and if you can’t laugh and you can’t have fun, I don’t think I’d be able to do the amount of work I do on this show. So I’d say I’m a prankster, I’m really sarcastic, I have a dirty sense of humor…. I fill that role. [Laughs]

TVLINE | I was cruising your Instagram and was reminded of the Segway scene (below). Who was the best driver among you?
Oh, by far Tom Welling. By far. I was the worst, and Tom Welling was quite agile and really, like, zippy and quick. [Laughs] Tom Ellis was really great on it, too, but Welling was going up and down sidewalks and racing up and down the street…. It was so fun that day. We laughed so hard.

TVLINE | I’ve never set foot on a Segway. What’s the key?
It’s weird — for the first 10 minutes you’re so scared of going backwards or forwards. But if you just stand like you’re standing on the ground, it’s like that. And if you turn your head to the right a little, your Segway will follow you. They’re so precise and subtle if you slightly lean back the Segway will reverse. [Laughs] Welling fell off twice but that’s because he was trying to do tricks. But it was hysterical. All of it just makes me laugh, thinking about it. It was the most fun day of Season 3 for sure.

TVLINE | Do you have an opinion on how differs from other by-the-book cops who get paired with an irrepressible non-cop?
I think that she has had just wacky enough an upbringing that she is open to people who are strange or creative. It basically has to be that way to serve the story, but it’s still kind of cool. Chloe is sensitive to people’s struggles and she is more accepting than the normal cop. She might even be a bad cop because of that. [Laughs] She’ll let some things slide, and that’s why she can work with Lucifer and accept him. Her mother, Penelope Decker (played by Rebecca De Mornay), was this huge, sci-fi bombshell actress, so she had kind of a zany upbringing.

Lucifer is super charming and super fun and inappropriate, smoking and drinking and having orgies, but she respects him enough because he actually does help her at the end of the day. Like with what we call “his mojo,” when he goes into, “What do you desire?,” he’s doing things that are absolutely helpful. I imagine it would be like a police department that uses psychics. She’s open, and I like that about Chloe. She tries to do a good job. She’s kind of the straight man of the show, which is funny because people always say that to me on set, “I can’t believe that you’re the by-the-book girl.”

TVLINE | But she is a little dorky. She has no game.
Yes! [Laughs] Exactly. None! It can be fun to play, and I love when try play up the dorkiness. It’s a little break from the procedural. 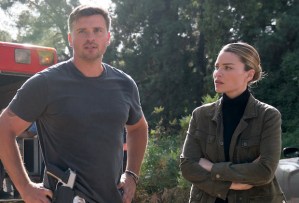 TVLINE | Tell me about the “interesting turn” coming up this week for Chloe and Pierce….
They’re getting to that point in their relationship where the flirtiness is, like, undeniable. They’re in the workplace and she’s trying to be professional, but she’s in lust, so they have [a hook-up]. Other than the time Chloe had a fantasy dream about Lucifer — where he grabs me and we make out, he throws me on the piano we make out, and then on the couch we make out — this is the first time you see anything like that [involving Chloe], when Pierce and Chloe go at it in the evidence closet. (Watch a sneak peek.) As much as you can show on TV, I think they really went for it with that scene. That’s how the episode starts off and you think, “Oh that’s great, they’re falling in love, this is fun,” and then Pierce sort of starts to pull away a bit and Chloe just clings on more and more. And by the end of the episode [SPOILERS REDACTED].

TVLINE | Should we and/or Lucifer worry about Pierce’s alliance with Maze?
Yeah, I think there is a lot at stake there. Maze could get hurt, Lucifer could get hurt, Pierce could get hurt…. This week’s episode is really good at setting up and foreshadowing that. Pierce may not be who he’s presenting to be, and he may have ulterior motives.

TVLINE | See, I’ve grown wary of him in recent episodes. He seems to have shifted gears.
Yeah, he’s a shady character. And they’re sort of setting up Pierce to maybe struggle with the thought of what he ultimately wants — which is to die, to experience death as a celestial. That’s his agenda, but it’s all about how he gets there. And his so-called love for Chloe will cause him to do something heroic or something really evil. And that is where we push towards the end of this season. 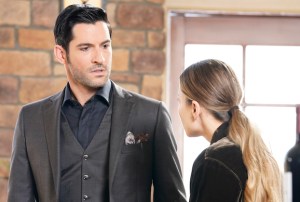 TVLINE | Looking ahead to the April 25 episode, Chloe confronts Lucifer about always meddling in her life. What in particular sparks that?
Lucifer gets jealous, basically, of seeing Chloe fall for Pierce, and he’s also wary of Pierce, so he tries to almost woo Chloe — but it seems almost out of jealousy and trying to prove himself. She realizes that he has never wanted to “go there” with Chloe, meaning be in a relationship, and she maybe hasn’t either. We got the idea that if Lucifer came to her and said, “I want to be with you,” Chloe would, but he’s just not putting it out there. So she really lays into him, like, “Look, why are you fighting me on this? This is the first time since Dan and I got divorced I have met someone. Why can’t you just be happy for me?” And in that moment, he [SPOILER REDACTED].

TVLINE | Have you ever played out in your head what Chloe’s reaction would be once Lucifer finally comes clean?
No, I haven’t. Sometimes my instincts aren’t necessarily where the writers room would want the character to go, so I kind of learned to put my take on things aside. But I do know that it would probably be a dream come true and it would be the love of her life and make her the happiest person ever.

TVLINE | Actually, I was talking about him being the Devil. You’ve played the disbelief/eyeroll thing before, but if Chloe ever had to really wrap her head around it as a truth….
It would be so strange. Our brilliant writers would have to come up with something that would make her accept it. I’m sure at first it would be a shock and maybe she runs away, so to speak. [Lucifer comic book spoilers ahead] But I do know I’ve had enough fans say to me — and they use a million terms from the comic books — that I’m a celestial, I’m a something, an angel or….

TVLINE | Right, she does have this ability to neuter Lucifer’s powers.
Yeah, so maybe one day if that comes out and she realizes that she is part of a different realm, too, that would help accept that he’s the Devil. Or if that doesn’t pop into our storyline and she’s still a human… there will have to be some force of nature, some amazing realization that makes her able to cope with him at least being around. She sees every day that all Lucifer ever really does is try to take down bad guys! It’s one thing if  you have an axe-murdering, abusing Devil, but it’s hard to step away from someone who does so much good.