As someone who [A] willingly watched Glee until the bitter end, and [B] has seen Wicked enough times that I’ve started wondering what the Wicked Witch’s talking-goat teacher does after hours, I was embarrassingly excited for Monday’s American Idol.

Sure, I was curious to find out which singers would snag the final seven open spots in this season’s Top 14 — but not nearly as curious as I was to see just how thoroughly Ada Vox would nail “Defying Gravity” alongside Rachel Berry herself, Lea Michele. Honestly, it’s the kind of once-in-a-blue-moon event that gay prophets have been documenting on scrolls for thousands of years.

But before we get to the duets — some of which were the musical embodiment of an Italian chef kiss — we need to talk about the Top 14. The following seven singers made it through and will sing live for America’s votes next week:

Sadly, that means Ron Bultongez, Amelia Hammer Harris, Shannon O’Hara, Alyssa Raghu and Effie Passero have had their Idol journeys cut short. (I’m OK with these results for the most part, save for Passero. I absolutely would have given her Jacobs’ spot in the Top 14.) 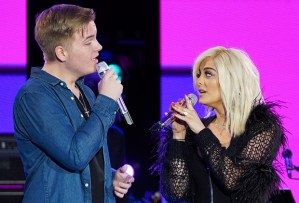 CALEB LEE HUTCHINSON
Paired With: Bebe Rexha (“Meant to Be”)
Thoughts: Maybe it was a result of having a partner to vibe off of, but a surprising thought struck me during Hutchinson’s performance tonight. For the first time, I feel like he… came alive? Don’t get me wrong, he wasn’t bouncing off the walls or anything, but I detected significantly more personality emanating from the “aw-shucks country boy” than in previous performances. To quote Beauty and the Beast, there may be something there that wasn’t there before.
Overall Hotness:

ADA VOX
Paired With: Lea Michele (“Defying Gravity”)
Thoughts: Kurt Who-mel? Not only did Michele and Vox’s voices melt together like marshmallows, but their energy was completely in sync, rising and falling together perfectly. I would have preferred an arrangement closer to the Broadway version than the one from Glee, but I’m not about to look a glitter-covered gift horse in the mouth. You know, if this whole American Idol thing doesn’t work out, it might be time for Broadway’s first drag-queen Elphaba.
Overall Hotness:

MADDIE POPPE
Paired With: Colbie Caillat (“Bubbly”)
Thoughts: Damn it, editors, you got me again! I was really nervous for Poppe when the pre-performance segment revealed that her nerves might be getting the better of her. But neither I not Maddie has anything to worry about. She and Caillat were a dream team; the vibe was chill, the harmonies were gorgeous and the confidence was dead-on. (Side note: I know Caillat isn’t in this competition, but can we give her the award for Most Supportive Partner, anyway?)
Overall Hotness:

RON BULTONGEZ
Paired With: Banners (“Someone to You”)
Thoughts: Once I realized that this song wasn’t just Sia’s “Elastic Heart” with different lyrics, I actually kind of enjoyed it… but not that much. Bultongez has always been a risk taker, and those risks usually pay off, but this just wasn’t one of those times. I commend him for coming out of his shell (a little), but there was simply nothing exciting about this performance. Even Perry struggled to find a compliment: “It wasn’t perfect, but perfect is boring.”
Overall Hotness: 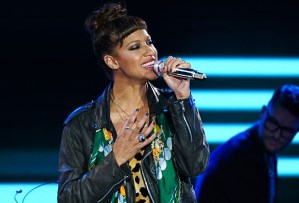 AMELIA HAMMER HARRIS
Paired With: Bebe Rexha (“Me, Myself & I”)
Thoughts: This was a fine performance, though it felt less like a duet and more like the two ladies were just taking turns singing a song together. (And before you leave a comment saying, “That is what a duet is!” just know that I had very little sleep last night, OK?) Real talk, though, Harris held her own up there with Rexha, which is something to be commended in itself.
Overall Hotness:

SHANNON O’HARA
Paired With: Cam (“Burning House”)
Thoughts: Blame what you want — nerves, mic issues, whatever position Mercury is in at the moment — but I thought this was the first performance of the night where the contestant ended up getting eclipsed by the pro. She slayed all of her individual moments, but when she and Cam sang together, she basically became a back-up singer.
Overall Hotness:

ALYSSA RAGHU
Paired With: Banners (“Yellow”)
Thoughts: Here’s the thing… I love that Raghu compared Coldplay’s “Yellow” to the National Anthem (“You don’t want to mess it up!”), and I love Raghu as a performer. But I wasn’t crazy about this arrangement, and I definitely wasn’t feeling any sort of connection between the two people on stage. And let it be known that I hate saying any of this, because I know she can do so much better.
Overall Hotness:

MARCIO DONALDSON
Paired With: Allen Stone (“What’s Goin’ On”)
Thoughts: At the risk of applying the rules of Pokémon to real life — or at least reality TV — I’m pretty sure we watched Donaldson evolve to his second form on that stage tonight. No offense to Her Holiness, but I’m kind of glad Braxton had to drop out at the last minute, because we might not have gotten to experience the magic that was Donaldson and Stone’s duet. I was already in love with him because of his backstory, but his voice has been blowing my mind these past few performances.
Overall Hotness: 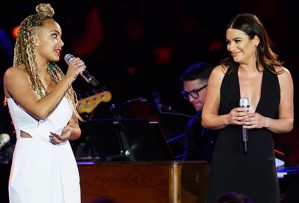 JURNEE
Paired With: Lea Michele (“Run to You”)
Thoughts: No offense to Darren Criss, but if Jurnee and Michele decide to announce that they’re going on tour together, my butt will be in that seat yesterday. In addition to their voices blending like butter, they challenged each other to keep giving more — and more they gave!
Overall Hotness:

GARRETT JACOBS
Paired With: Colbie Caillat (“Lucky”)
Thoughts: He’s no Jason Mraz, but Jacobs made a pretty decent partner for Caillat as they crooned this smooth little jam. It was nice. I felt like I was in an elevator. It was also refreshing to see Jacobs connect with a romantic song without merely reaching into the audience and feeding off the crowd-zombies’ undying love.
Overall Hotness:

MARA JUSTINE
Paired With: Rachel Platten (“Fight Song”)
Thoughts: There’s keeping up with the pro, and then there’s crushing the pro and decorating your bedroom with their bones. Justine did (most of) the latter, reducing Ryan Seacrest to tears with a vulnerable-yet-powerful rendition of Platten’s power anthem.
Overall Hotness:

EFFIE PASSERO
Paired With: Cam (“Diane”)
Thoughts: I could have done without the 8 million back-up singers completely drowning out Cam and Passero during the chorus, but for the most part, I enjoyed this fully unexpected pairing. It was far from the best song choice for Passero’s style, but she did a lot with it, conquering her nerves and delivering a solid performance.
Overall Hotness:

Time to weigh in: Did your favorite singers make it through to the Top 14? Vote for the best performances of the night below (you may choose up to five), then drop a comment with your thoughts.