When Supergirl returns from her super-long break, the CW drama will hit the ground… flying.

Coming off a nine-week hiatus, Supergirl on Monday, April 16 at 8/7c will revisit Winn’s daddy issues, while also seeing if Mon-El will hide the Legion’s true agenda from Kara (to be covered in a separate TVLine preview). From there, with the third Worldkiller lurking around the corner, Reign’s destiny is poised to be fulfilled — unless Lena can help Sam solve her blackouts. Elsewhere, Alex’s personal dreams are at risk of being dashed, James faces an identity crisis and J’onn embarks on a twisty journey.

During TVLine’s visit to the Supergirl set, where… well, I can’t even begin to tell you what was being filmed… co-showrunner Jessica Queller made time to share a super-tease of what’s to come. 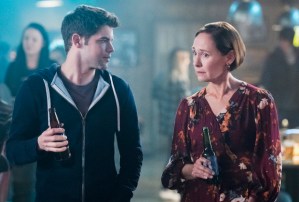 TVLINE | I can see that you have a massive reveal landing much later in the season, but what sort of “biggish bang” is the show actually coming back with on April 16?
Well, firstly, we’re coming back with “Dame Laurie Metcalf”, which is just thrilling. She will be playing Winn Schott’s mother, and that’s one of my favorite episodes of the season. It’s a phenomenal episode with a tremendous actress, and it’s really a showcase for Winn. Because we have so much to accomplish on the show, the character of Winn is sometimes relegated to the sidekick, but this is his aria. This is really a special episode about his father and his mother and his backstory.

TVLINE | It seems like it will dig up all kinds of issues for him.
Exactly. And there might be some flying monkeys that are kind of phenomenal, and that I would not miss if I were a fan of Supergirl. There’s humor, the action sequences are spectacular, and the acting is amazing. It also features something we in the writers room like to call ‘Kara-oke’ — a karaoke bar scene that bookends the episode, with all of our amazing actors who happen to have amazing voices singing.

TVLINE | Would you say that when the third Worldkiller emerges, it will kick the season to into a new gear?
Oh, yes. It’s like the three witches from Macbeth — it’s not complete until you have the trinity, and so once the third one has been found, the villains have their full powers. That definitely gets us off and running towards the big battles at the end.

TVLINE | Lena seems to be playing a dangerous game with the whole Sam thing. While we have every faith in her to manage it, is there the potential for it to blow up in her face? You’re in this funny situation where if one set of characters shared with the other set what they all know, the pieces could come together.
Exactly. One thing that we play a lot with in the upcoming episodes is the triangle between Lena, Kara and Supergirl, because Lena has a very different relationship with Kara Danvers than she does with Supergirl. Something we had never played before that we are really examining and excited about in the upcoming episodes is that Lena and Supergirl are at odds about certain things and a bit angry with one another, but Lena and Kara are best friends. Lena feels the closest to Kara of anyone in the world, so then Kara is suddenly in this position where she is sort of living two lives with one of her best friends. And although we’ve always had to see Supergirl maintain a dual identity, it’s very personal when it comes to Lena, and it’s very challenging for Kara, and so we’re really interested in that dynamic.

In an upcoming episode, there’s a big reveal that Lena has something in her lab that will enrage Supergirl and the DEO, and it turns into an epic battle of wills between the two women, Lena and Supergirl. I wouldn’t want to miss it. 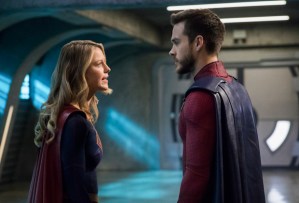 TVLINE | What’s ahead for Kara and Mon-El? Where the show left off, he had just confessed to Imra that his feelings for his ex remain… complicated.
It’s one of those heartbreaking, sort of star-crossed love stories where…I don’t know what to give away, but we are really excited to have the opportunity to dig deeper in their connection and excavate what’s under the surface. We want to make sure that those characters are honest with how they feel without having to keep any barriers.

TVLINE | It sounds like even though they’ve kind of explored that a bit this season, there’s a bunch more work to be done.
There’s a lot more coming. Mon-El is going to be a big part of the show through the finale, and it’s a heart-wrenching situation. There’s a lot of romance and a lot of drama, and I would definitely tune in to see how that will play out. 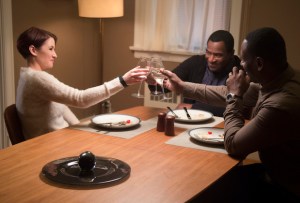 TVLINE | Are there any specific story points you want to tease for Alex or James?
Alex, as we know, broke up with Maggie in the most heartbreaking context, because it’s Alex’s dream to be a mother and that is one thing Maggie had no interest in being. So while Sam has been suffering under the terror of and losing herself to Reign, Alex really steps up as a surrogate mother figure. For Ruby, that connection deepens and it will end up bringing up a lot of issues for Alex. There’s an episode coming up in which Alex says out loud that nothing can happen to her because she’s now devoted herself to this child — and what if her child’s mom doesn’t make it? And in that very episode, Alex almost dies.

TVLINE | It is that time of the season when Alex almost dies.
It backfires, yes. It then dawns on Alex that the two great loves of her life, her passion for her career and her passion to be a mother, may be at odds. What does that mean? That’s going to be a really hard area for Alex to grapple with.

As for James, his arc is about the deepening of his relationship with Lena and his shifting alliance with his friends. He also contemplates what it would mean to reveal his true identity as Guardian.

TVLINE | And it sounds like J’onn has some intense stuff coming up with his father’s Martian version of Alzheimer’s.
I personally have a dad who has Alzheimer’s right now, so it’s very personal; I start crying in the editing room all the time. It’s a very personal story to me and to a lot of other people, and so we’re really trying to execute M’yrnn’s deterioration of his mind in an authentic, universal way and show how it impacts the father and son. However, we’re then adding a Martian dimension to that, where Martians are able to share memories and thoughts in a psychic way, so there’s going to be a component in which J’onn has the opportunity to take on all of M’yrnn’s memories and history. How that will impact J’onn and who he is [leads to] a very exciting twist in the finale that I think everyone will be excited and should stay tuned for.