This Thursday on Arrow (The CW, 9/8c), Oliver and Felicity try to wrap their heads around a team minus Diggle, who due to conflicting ideologies has hung up Spartan’s helmet.

“Things get pretty emotional,” Emily Bett Rickards shared with TVLine between takes, during our recent visit to the set. “It’s like your best friend breaking up with you. Felicity was there when it happened and she tried to play mediator best she could, but words cut deep and things transpire…. There’s a fracture in the spine of OTA.”

As not only Oliver’s longtime colleague but also his wife, Felicity will do what she can to keep the narrowed Team Arrow on mission. Though her reasons for doing so are increasingly fueled by heretofore-unwavering faith versus the facts at hand.

“She does the best she can, but as you are usually when you want to have somebody’s side so strongly, she’s a little bit biased,” the actress allows. “She still believes in their journey in front of them, and still wants to believe. And I think wanting to believe is, like, 95 percent of it some of the time. Without that belief, there are lives at stake. She wants to make sure she can keep things all together.” 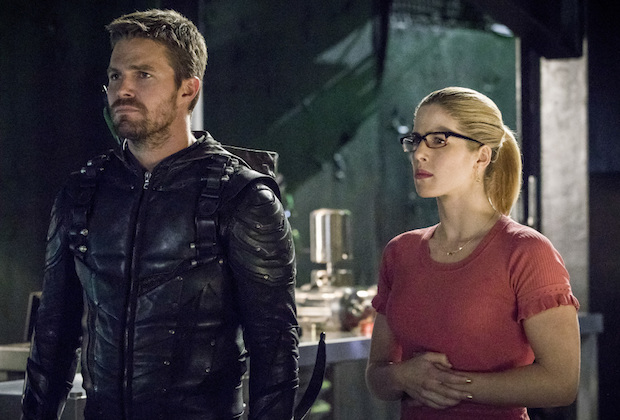 Indeed, throughout myriad tests of Team Arrow, cool, calm and collected Felicity often has served as a voice of reason, a peacemaker who (usually) helps people see other points of view. “That’s why I like her so much,” smiles her portrayer. But when it comes to Oliver’s rift with Diggle, “try as she does, it’s kind of the same thing as belief – you have to want to look outside your point of view. Because it’s not only about point of view, it’s motive in this case. Why are we doing the things that were doing? Why do we believe in justice so strongly? What type of justice am I after, what type of justice are you after…?

“People’s perspectives start to change, but hopefully their morals are still coming from the same place,” she adds. “And that’s kind of the debate.”

Adding to the considerable challenge at hand, Oliver — as glimpsed in promos for this week — begins to act out in the wake of this seismic shift within OTA, defying conventional wisdom to launch a high-risk attack on Ricardo Diaz, and with no backup.

“We as people just act out in general when big changes happen in our lives, no matter what it is,” Rickards notes. “Oliver unfortunately has a lot to lose, so acting out is not in his best interests.”

Nor is it in the best interests of his marriage, when his obstinate mindset unexpectedly puts Felicity in the cross hairs. (As Rickards observed above, “words cut deep.”)

Are “Olicity” fans about to brave one of their scariest moments yet? “Yeah, I think so…,” Rickards nods. But, hopefully, all that they have been through until now, and the incredible love that they share, can power the couple through this latest crucible.

“We’re trying to show that heroes have vulnerable and fragile spots as well,” Rickards says, looking at the bigger picture. “Everyone needs help, and that’s the whole point about accepting family and accepting help. That’s the strongest you can be, when you’re able to accept those things. And hopefully that comes across.”