As great as it was to have the scarlet speedster back on our screens this week, it required buying into the premise that Ralph — having been through such a rewarding redemption arc at midseason  — was back to being an insufferable goof. Alas, that is where we were, forcing Barry to grow increasingly frustrated with the elastic sidekick’s joke-joke-jokiness, and during the worst of times.

Eventually, after a couple of pep talks from Iris (who made Barry realize that Ralph was contributing, just not in the exact same way that team leader Barry would), and then a heart-to-heart with Ralph himself (who explained that he didn’t grow up having a Joe West to share feelings with), Barry came to better understand the situation. To the point that he trusted Ralph to catch him when he (literally) fell, from the sky, by turning into a giant whoopee cushion. When all was said and done, Team Flash had nabbed the 11th meta, dubbed Null. 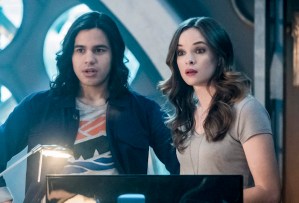 Meanwhile, Cisco got a visit from Gypsy’s dad Josh aka Breacher, whose powers had petered out during a face-off with the bloodsucker Crucifer. Breacher pinned his hopes on Cisco’s mastery of meta science to fix him, but Caitlin concluded that (very, very) old age was to blame — and Cisco was terrified to come clean to the crusty collector. But after tricking Breacher into thinking he had gotten his mojo back, Cisco wound up having to save him from a potentially deadly duel with Crucifer, and once back at S.T.A.R. Labs confided the truth. Breacher stormed off, but later returned, in jaunty casual wear, to report that he was embracing retirement. What’s more, he gave Cisco his endorsement to replace him at the Collection Agency, where he could work alongside/spend more time with Gypsy.

Over at DeVoe’s lair, Marlize came to realize that she is being drugged by Clifford with the Weeper’s tears. Marlize smartly thought to leave herself, Memento-like, a video message to remind her of her love’s duplicity… only to discover she had already done so before, “too many” times, Clifford shows up to report! Worse, DeVoe has made a mix of Weeper tears and Dominic Lanse/Brainstorm’s DNA that apparently will make Marlize even more compliant, so that they can fulfill their destiny — especially now that the 11th meta has been found.

Lastly, in the “bonus” scene, we see Harry slip into the Time Vault and plug his “thinking cap” into the closet where Eobard Thawne hid Reverse-Flash’s suit. Harry then unlocks and accesses Gideon, who notes that it’s been 1,087 days since she and “Dr. Wells” last spoke. “A lot has changed since then,” he ominously answers…. Wait, what?

What did you think of The Flash‘s return — “Jay and Silent Bob” cameos included?