Everyone’s favorite albino badass returned to Black Lightning this week, and while Tobias is still focused on finding his elusive foe, he actually has a much larger goal in mind. To that end, he uses his influence on Khalil and Lala to achieve the power he’s wanted for so long.

Resurfacing for the first time since the melee that left his sister Tori dead, Tobias meets with Martin Proctor at the facility where the ASA facilitated his recovery after Black Lightning “tried to barbecue” him. Martin assures Tobias of his importance, especially now that Lady Eve is dead. He also details the Freeland Experiment, and the flaw in the serum (and now in Green Light) that ultimately killed the subjects. Martin wants Tobias to bring Black Lightning to him alive so he can be studied, and offers the help of Khalil, who struts in wearing the worst dreadlocks in TV history.

On a much different note, Lynn phones Jefferson and asks him to come over to help kill a spider, but when he arrives… he finds her wearing lingerie. She gives him the green light (so to speak) and they finally get some sexy time. As they lay in bed after, Lynn says that all the recent stress has made her feel closer to him than ever. They decide to keep this rekindling a secret from the kids for now.

The next day, Jefferson spots Khalil walking down the street and asks about the procedure that helped him recover. He’s worried the young man is being taken advantage of, but Khalil deems it all way too little, too late. Afterward, Jefferson visits Khalil’s mom, who thought her son was still in California getting treatment. She gives Jefferson the phone number of a hospital administrator named “Mr. Martin” (as in Martin Proctor!) who chose Khalil for this next-gen “pilot program.”

Naturally, Jefferson tells Jennifer he saw her ex-boyfriend, walking again. She wants to see him, but her father stops her because, he warns, Khalil has changed. Jennifer counters that her longtime friend would never hurt her and, in her frustration, says she’s glad that Lynn has been working to isolate the gene that creates her powers. While her parents argue about this notion, Jennifer sneaks away to their old house. There outside her bedroom window, Khalil is waiting for her, and they share a hug before making amends about how their relationship ended. After Khalil shows off his metallic spinal implant, J asks questions. He suspects her dad put her up to the grilling, so he bids her “ass” adieu and leaps off the roof.

At Gambi’s, Anissa says she might be able to find the pods by tracking the electrical spikes in the facilities used to store them. Surveying that data, Gambi notes that it coincides with the development of high-output mobile solar energy, which allowed the pods to operate off the public electrical grid. (Yea, science!) Before they can dig deeper, they hear via the police scanner that Garfield High is under attack! 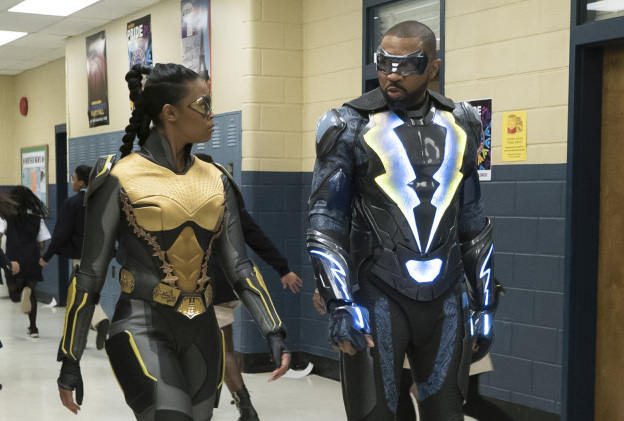 Black Lightning and Thunder head to the school, where Khalil is knocking over school buses, shooting knockout darts at students and hurling faculty into trophy cases. Jennifer tries to reason with him, but he makes clear that he’s not the same person she knew. (Deadly threats from Tobias will do that.) Khalil still cares about her, though, so doesn’t harm her or her friend. Meanwhile, Thunder walks into a classroom where Syonide is waiting, and the two face off. Syonide’s bullets and daggers are useless, so it comes down to some fierce hand-to-hand combat.

Out in the hallways, Black Lightning sees Tobias and zaps him, but the undersuit he’s wearing protects him from the jolts. When Khalil starts lobbing lockers, Gambi advises Jefferson to zap Khalil and short out his implant. Knowing that will paralyze the kid again, Black Lightning hesitates, allowing Khalil to shoot a dart that shorts out his meta powers.  With Tobias holding BL down, Khalil punches the hero hard enough to knock him out — and then some!

Unable to find a pulse, Tobias shoves Khalil because Black Lightning was supposed to be brought back alive. Tobias nonetheless goes for a peek beneath his longtime adversary’s mask, but Thunder arrives just in time to knock down the baddies before shielding her dad from Syonide’s bullets. Arriving to see her dad lifeless, Jennifer’s emotions create a surge of power when he shakes him, “shocking” him back to life. The Pierces and Gambi then escape to safety at a remote, “cloaked” cabin.

When Kara reports to Martin that their target is dead, he lets off a lotta steam before saying that he wants Black Lightning’s body and Thunder (dead or alive). He then bellows, “This experiment cannot fail!” (Hmm, why?) Meanwhile, Syonide brings Lala to see Tobias. Lala pulls a gun but when Tobias repeats the ominous phrase he used to earlier to get Lala to kill weapons whiz Hidalgo — “The devil deals the cards” — Lala cowers, lowers his gun and sits.

“We killed Lady Eve to get a seat,” Tobias notes to Lala and Syonide. “Now we just have to take care of Proctor and we’ll own the whole damn table.”

What did you think of “The Resurrection and The Light: The Book of Pain”?