Will a secret stupefy Supergirl? Will Once Upon a Time spin a tale of two [Spoilers]? Will Timeless pairing turn passionate? Which NCIS agent is on a serial killer’s hit list? Read on for answers to those questions plus teases from other shows.

Anything about Supergirl’s Kara and Lena and what the future holds for them? –Nancy
As part of TVLine’s upcoming in-depth Q&A about the back half of Season 3 (premiering Monday, April 16), executive producer Jessica Queller told me, “There’s a big reveal” involving Lena “that will enrage Supergirl and the DEO. It turns into an epic battle of wills between the two women. I wouldn’t want to miss it!”

Anything on Snow and Charming’s return for the final episode of Once Upon a Time? –Andrew
Henry’s grandparents have “a critical role to play in the finale,” series co-creator Adam Horowitz shared during my visit to the set, where the ABC series’ very final episode was being filmed. Bonus scoop: Speaking of Henry, what if I told you that Andrew J. West and Jared Gilmore will have a scene with each other before the season as over…?

Any Timeless news? —Mary
Now that Nicholas has tasked Emma with snuffing out Lucy, you can bet Carol is going to be put in an even more difficult position. “Emma finds a potential way to ‘climb the ladder’ through her relationship with Nicholas,” executive producer Eric Kripke says. “And so Carol finds herself trying to manage both Nicholas and Emma and her mission versus her feelings for her daughter. She really has a lot to juggle.” By the way, is anyone else wondering if Emma is interested in Nicholas as more than just a leader? When we broached that subject, Kripke would only say, “Stay tuned!” 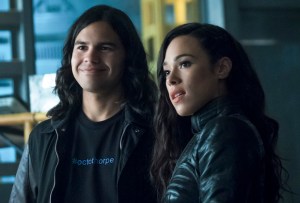 Any chance you have some scoop regarding The Flash? —Jen
You probably know that Danny Trejo’s Breacher returns this Tuesday, to ask Cisco a favor. What you might not know is that Cisco’s girlfriend Gypsy herself (played by Jessica Camacho) will resurface a bit further down the road.

Do you have any Blindspot scoop on Kurt and Jane’s relationship? –Maite
“Kurt and Jane are full-on #Jeller for the rest of the season,” show boss Martin Gero assures Inside Line. “They’re through the worst of it and are falling more in love.”

Can I get any scoop on Blindspot‘s Patterson? —Carlynn
“Patterson has an amazing episode coming up where we finally meet her father, played by Bill Nye,” Gero reminds. “You learn a lot about her.” 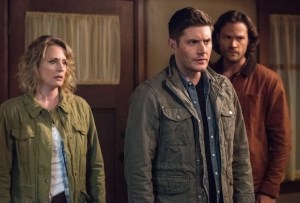 Any scoop on Supernatural? –Susan
Just because Dean and Sam are trying to get Mary home doesn’t mean she’ll want to go back. “She actually enjoys the fight” in apocalypse world, executive producer Robert Singer says. “That’s something that when she was in our world, when she went off with the British Men of Letters, kind of upset the guys. She, in an odd way, has found a home there where she can be a pure fighter. She doesn’t think that the boys are coming. How would they get there? So she’s pretty entrenched in that world. When they do show up, it causes a little bit of tension between her and the boys.”

Any scoop on what to expect from NCIS: New Orleans’ two-hour season finale? –Hollie
Would you settle for Season 4’s antepenultimate outing? Because I am hearing that in the Tuesday, May 1 episode, Agent Gregorio will be tested on all levels — emotionally and physically — when a serial killer realizes that she is on to them… and thus decides she should (gulp) be the next victim.

Besides the Media swap, anything to report yet on the next season of American Gods? —Tracy
I hear that the Starz drama is looking for a young, Native American actress to play Sam Black Crow in Season 2. In Neil Gaiman’s novel, Sam is a forthright half-Cherokee/half white college student who meets Shadow as she’s hitchhiking. I don’t want to spoil anything for those who haven’t read the book, so let’s just say that Sam becomes more enmeshed in Shadow’s journey — in an unexpected way — as the story progresses. 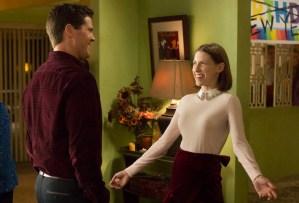 It seems like The Middle wants Sue and Sean to be their own version of Ross and Rachel! Any chance we might see them together and able to enjoy their relationship for a few episodes, or is it going to be pushed to the final hour? –Mads
I promised you an answer this week, Mads, and here it is, what just might be Inside Line’s penultimate Middle tease. “You aren’t someone who peeks at the end of the book before you finish reading it, are you?” exec producers Eileen Heisler and DeAnn Heline responded. “We’re so happy you are as excited about the last few episodes as we are. Stay tuned and all will be revealed…”

What’s ahead on Chicago Med? (That rhymed so you have to answer it!) –Jules
So you say, so have it your own way. We haven’t seen the last of D.W. Moffett as Papa Rhodes this season. “There’s a bit more coming up with Connor’s dad,” star Colin Donnell tells TVLine. “Ava and he seemed to be chatting it up rather intimately [in last week’s episode], so who knows. At the end of the day, there’s always going to be that bad relationship between Connor and his father. I don’t know if there’s a way to amend it, and we don’t really get into that. But he does pop in in the next couple episodes.” 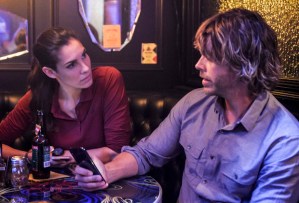 Will NCIS: LA’s Deeks and Kensi ever get married? So many viewers are waiting for their wedding. –Linda
Well, we now know Deeks has been scouting on venues. So… baby steps? “Is there eventually going to be a wedding? Yeah,” Eric Christian Olsen recently ventured. The bigger question, he said, is this: “Is there going to be a lot of stuff to work through before we get there?” As he elaborated, “There’s some crazy stuff [in the last two episodes] that’s incredibly personal, and the goal with Deeks is always to play the human element of it; not the Bruce Willis version, but a guy who is flawed and is terrified of losing the love of his life. And as we continue to put ourselves in danger, at some point it becomes emotionally exhausting for him, like, ‘What is the plan here?’ So there are some interesting conversations about that – obstacles in an emotional sense, that make for compelling scenes.”

Real questions from real human beings get real answers! If you need the Inside Line on a favorite show, email InsideLine@tvline.com! (With reporting by Vlada Gelman and Kim Roots)