Legends of Tomorrow opened its Season 3 finale with a quick farewell to a longtime ally, before launching into final showdown with Mallus (which, by the way, is pronounced “malice”/rhymes with phallus).

Now in possession of the six totems but uncertain how to use them against giant, winged Mallus, the Legends got out of Dodge, so to speak, to flee to the other Dodge aka Salvation — all while Rip ripped out the Waverider’s primary time drive to sacrifice himself by consuming Mallus in a critical mass explosion. 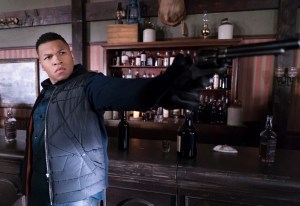 Retreating to Jonah Hex’s town, the Legends threw a few back as Sara formulated a plan, until Mallus interrupted with a trio of messengers — Caesar, Blackbeard and “Leif Erickson’s crazy sister” — sent to deliver a high noon deadline to turn over the totems. After Amaya and Nate took a vision quest to witness her ancestors properly use the totems, the Legends tried to mirror the joined-hands circle, but their first crack resulted in their creation of a… yeesh, what was that mangled, gooey thing? Anyway, NOT GOOD. Luckily, soon after is when Ava, having seen Amaya’s time beacon, arrived on the scene with Jax (now a married dad!), Helen of Troy (now a Themyscira-trained warrior princess!) and a “good” Kuasa in tow.

Ray meanwhile had escaped with Damien Darhk in the jump ship to the time right before Mallus consumed Nora. Damien was thus able to save his daughter by zapping her mid-mutation with the nanite gun, but in turn he sacrificed himself to become the demons’ new host. Ray then escaped to Salvation, with Nora. 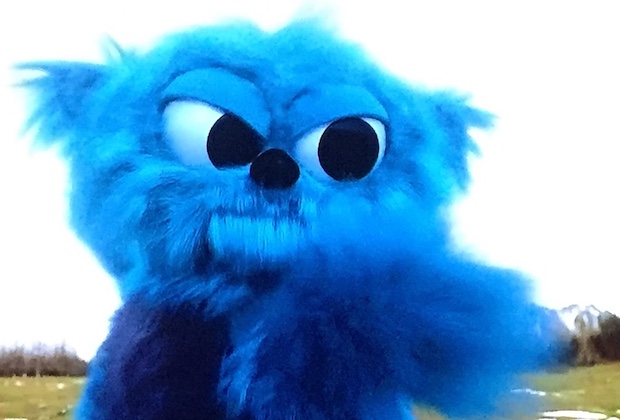 As high noon arrived, the Legends and Ava’s backup team ably fended off the evil army of vikings, pirates and Romans. But when Mallus arrived in his true form, it called for a bigger gun. So, giving the totems one more spin, the Legends conceived… a gigantic Beebo, who proceeded to kick the time demon’s ass alllllll over the place, ultimately cuddling Mallus to death.

After the Legends emerged from the blue heart-shaped explosion, Amaya turned the totems over to Kuasa… Jonah gifted a flirty Zarai with his dirty hat… and Ray gave Nora her father’s time stone, urging her to make the best of this second chance. Amaya then said farewell, ready to return to Zambesi circa 1942. There, with Nate, she kissed her love good-bye but refused to let him wipe her memory of their time together. (Interestingly, Maisie Richardson-Sellers will still be a regular for Season 4.)

The remaining Legends went on to catch some well-deserved rays in Aruba 2018, until, that is, Constantine showed up to drop a severed monster head out of a bag. By unleashing a time demon from its prison, he explained to Sara, “You opened a door, love — and Mallus wasn’t only thing that got out.”

As Legends EP Phil Klemmer previously teased, Mallus was in fact but the “tip of the iceberg,” a bellwether of other fantastical and or monstrous beasts to be dealt with come fall. “Everybody knows that Constantine is joining our show [for Season 4],” he said, “and he’s certainly the shape of things to come.”

As for filling Amaya’s vacated Waverider seat, Klemmer said, “I don’t think we’ll discover our new Legends or Legends in the premiere next season, but we’re hoping to discover a new person or people along the way, who can become a full-time resident of the [ship].”

What did you think of the finale? The right combo of “funny, poignant and ridiculous”?