The civil war that has splintered Team Arrow is one of the most heatedly discussed topics of this TV season, and co-showrunner Marc Guggenheim has an idea why the storyline wound up being polarizing.

In the CW series’ midseason finale, Rene, Dinah and Curtis parted ways with Oliver, Diggle and Felicity when a dark cloud of distrust loomed over the expanded Team Arrow. To recap: Rene had confessed that he was the FBI’s key witness in identifying Mayor Queen as Green Arrow, but only after he, Dinah and Curtis learned that they were being spied on by their colleagues. Further fueling the feud, Dinah had not only let Vigilante, the team’s longtime adversary, get away upon realizing he was her “dead” boyfriend/partner, but then went on to take secret meetings with him.

OTA (Original Team Arrow) thus argued that their surveillance was justified, whereas NTA (New Team Arrow) took umbrage at Oliver’s lack of trust. And though each side made valid points, the fact is that the relative newcomers had fewer Arrow fans backing their play. 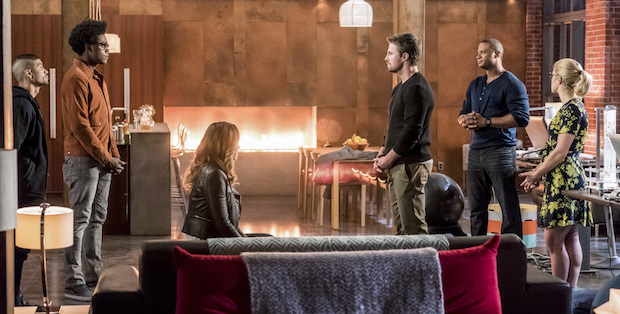 Assessing the adverse reaction to the infighting, Guggenheim recently told TVLine, “I think if I miscalculated anywhere, it’s probably on the order of not taking into full consideration the fact that while all the arguments may be equal and equally strong, there’s always going to be a love and affection for the original characters that the new characters don’t get a chance to enjoy.

“In crafting these arguments, we were being, I think, very evenhanded. At least we were trying to be,” he added. “But we were not taking into account the familiarity factor.”

That said, Guggenheim — who in addition to developing Arrow and Legends of Tomorrow for the small screen has written comic books, for Marvel and others — stands by the premise of the storyline, citing a well-established pattern in superhero sagas.

“Superheroes having a falling out and fighting amongst each other is one of the most longstanding comic book traditions,” he noted. “Again, this is maybe where we miscalculated, but I always assumed the fans would go along with us in this regard, because it is such a tried-and-true comic book [convention].”

In fact, TVLine suggested that one need look no further than the 2016 blockbuster Captain America: Civil War, in which the titular Steve Rogers locked horns with Tony Stark aka Iron Man over the Sokovia Accords, which allow the United Nations to regulate the activities of enhanced individuals. “In the Marvel cinematic universe, very good movies have been made about [infighting],” Guggenheim concurred.

As for the future of Arrow‘s OTA vs. NTA arc, which in recent weeks escalated with an all-out, knock-down, drag-out melee, “The thing I always ask, or I think any showrunner would ask, is: We’re basically in the middle of the story, so try to try to withhold judgment until you see how the story resolves itself,” Guggenheim said.