According to the title of Legends of Tommorow‘s Season 3 finale, “The Good, The Bad and The Cuddly” will face off on Monday at 8/7c, on The CW.

When last we tuned in, the Legends had entered into an uneasy alliance with Damien Darhk, only to have it backfire on them a bit. Even so, they now have the totems they need to theoretically vanquish Mallus, who has broken free of his prison and bloomed into his true and massive form.

Legends co-showrunner Phil Klemmer gave TVLine a preview of the upcoming showdown at the Not-At-All-OK Corral, a former team member’s return and some possible good-byes.

TVLINE | It appears the team winds up back in the Old West for the finale. Did someone think it was simply the perfect location for a showdown?
It did, yeah! [Visiting Jonah Hex] is the one thing we’ve done every season, so it only seemed fitting that we would return there. We also did plant the seed in the first season that there were these temporal blind spots where you could hide out when on the lam, and our team is definitely on the lam. We’ve also got all those cool costumes, which Caity [Lotz] and everyone looks great in. Lastly, it was such an ambitious finale that there can only be so many variables, so it really does help to do something that you’ve done before and you know how to do it. There’s so much else going on in the finale that we’ve never tried before.

TVLINE | All the totems are accounted for, and the team has possession of them. Is it now a matter of just finding right way to use them?
That’s the thing — we didn’t want the finale to be too mechanical. We wanted to remain true to the unexpected quality of our show, and the only way to do that is to turn whatever the expected version was on its head. The totems will not work the way you’re expecting them to, but I believe they’ll work in a way that’s emotionally and dramatically satisfying. Hopefully it’s funny and poignant… and the right amount of ridiculous. 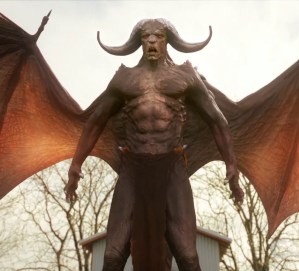 TVLINE | In his true form, what are Mallus’ powers besides looking damn intimidating? Does he breathe fire…?
He’s, like, a fire-hurling, flying demon. His greatest power, though, is chewing through visual effects money. His one superpower is that every moment he’s on screen, you can imagine a pile of cash turning into smoke.

TVLINE | What is his agenda? What does he “want” most in the world?
He is a sort of bellwether of bad guys to come in Season 4. Up until this point, we’ve been dealing with earthly and historical bad guys, and we certainly had fun with all of that, but this year we dabbled in the world of the occult, through Damien Darhk and his enterprises. But you know that Constantine is coming onto the show [as a regular] next season, so we want to go deeper, we want Mallus to be used as “the tip of the iceberg.” He is not human, and we want to start playing with the idea that Earth hasn’t always belonged just to our kind.

We want to get into the world of fantastic myths and monsters a bit more. It’s kind of presumptuous for anybody to think they have ownership of this Earth or any part of it. Not to get deep into immigration metaphors, but Mallus is an ancient evil, he doesn’t understand humans and doesn’t understand why we have any claim to controlling this world of ours.

TVLINE | What is Ava’s mindset in the wake of her most recent conversations with Sara and then Rip?
What I really wanted to do was to have her not do what you want her to do. You wanted her to lean into Sara’s support and to turn on Rip, and instead she [decides] that when something goes horrible, you’re like, “I’m going to live for my job.” She’s so overwhelmed by the revelations about her own origin that she reverts to “early-season Ava,” which is rules and regulations and hair tied up in a neat bun. That’s sort of tragic, because we were luring her out of her “shell” through the relationship with Sara, but because of what she learned about herself in “I, Ava,” there’s this version of her being like, “I am just a clone. I am not a person.” We wanted to make her feel unworthy of love in the same way that Sara used to feel about herself. 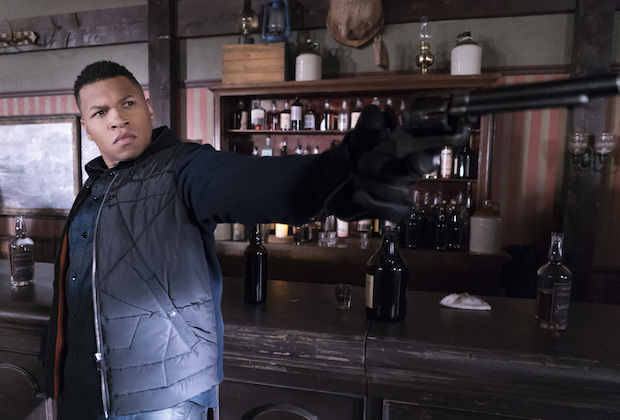 TVLINE | New photos reveal that Franz Drameh is back for the finale, as Jax. What do you want to say about that encore?
You might have noticed that we’ve included a number of family members of our regular cast on the show as guest stars — like Brandon Routh’s wife Courtney Ford in the role of Nora Darhk, and the guest appearance of Maisie Richardson-Sellers’ mother Joy Richardson as Amaya’s vision quest ancestor. So if you look very closely, you’ll notice that the finale doesn’t just include Franz Drameh but a brief cameo of someone related to him.

The Jax we meet in the finale isn’t the same one who left our team a matter of months ago — he has been inspired by what he learned from his friend and mentor Martin Stein. Being a time traveler is like living in Neverland, where you never have to grow up, and having Jax return to our show after a stint in the real world is a bittersweet reminder of what his friends and former teammates are missing. When we started this show three years ago, we never would have guessed that the youngest Legend would be the first to “grow up,” or that the guy that had to be tricked into joining the team would be the one to answer the Legends’ call in their hour of need.

TVLINE | OK, the big question I have been building up to: Will we see Beebo again? The finale title does have the word “cuddly” in it.
And he is a very cuddly guy. I will say this: Once you’ve invested hundreds of thousands of dollars in CGI assets, it’s a shame to only use them once. That’s why you see Grodd [on a recurring basis] — we finally figured out how to do this really well, so we have to do it again! So keep your eye open for Beebo, for sure. 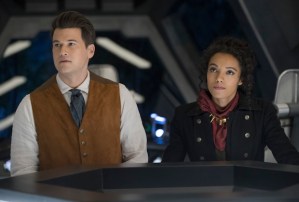 TVLINE | Because you’ve promoted both Matt Ryan (Constantine) and Jes Macallan (Ava) as regulars for next season, does the finale pave way for any exits?
It does, it does. There’s heartbreak in the finale. A Legend leaves.

TVLINE | It could be argued that Amaya’s story, for one, has come full circle.
As far as her and Nate, I don’t know if love is made to last in the world of the Legends.

TVLINE | But at least one seat will be freed up aboard the Waverider itself…?
Yeah, yeah.