As Thursday’s Will & Grace brought down the curtain on the sitcom’s Season 9, the besties were in total agreement: “We gotta make some changes!” But the funny thing was, the episode already had dished out some humongous changes for the roomies — and, for that matter, for Jack and Karen, too. What had left Will and Grace so horrified that they were willing to shake up the status quo? Read on and find out!

‘OK, BABIES, SAY HELLO TO YOUR BROTHER’ | As “It’s a Family Affair” began, Martin was ensconced at Will and Grace’s, and his daughter was having more or less precisely the reaction you’d expect her to. (So well do we know her, you can probably picture her expression, right?) “I really should be thanking you,” she told Will through gritted teeth, “for inviting Master Sits-and-Farts into our home.” If only there was some way that she could express her “gratitude”… Right on cue, there was a knock at the door: Grace had invited Will’s mother Marilyn (Blythe Danner) and siblings (Marilyn’s beagles) to come for a visit.

Quicker than you can say “We’ll be right back,” Grace regretted exacting payback against Will. Not only were the folks game-night train wrecks, but they bonded over the disappointing children who weren’t even going to give them grandkids and couldn’t seem to get over the fact that Will and Grace’s relationship was incestuous. Except that, Will pointed out, neither were he and Grace related nor were they having sex. Once the conversation escalated into an argument, Marilyn stomped off to bed, Martin following to check on her. By then, Grace was really sorry that she’d called in Will’s mother. “I thought when I did it, ‘Oh, that’ll show him,'” she admitted. “I forgot that I live here, too.” 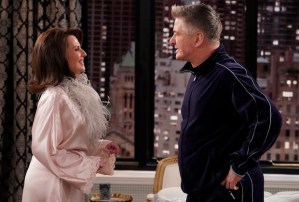 ‘YOU CANT GET ON TOP IF YOU’RE NOT ON BOARD’ | Meanwhile, Karen revealed her decision to Malcolm: She was keeping things exactly the way they were. Unfortunately for the two-timer, her lover was so tired of being her “down-low ho” that he vowed to withhold sex until she chose him over Stan. That being the case, she wasn’t going to make it any easier for him than he was her. First, they flashed one another, then, after he used his tongue to tie a cherry stem into the letter K, she spelled out his entire name in stems with her… um… She did it below the table, let’s put it that way. “You even remembered the silent L,” he marveled. Next, they mimed all the things they’d no longer be doing to one another, including her putting her pinky someplace he liked a lot.

While all this was going on, Jack was drowning in a sea of fitness models in Ibiza and complaining to his mom over the phone that he was going to be alone forever. Mind you, he was not even alone for the duration of the scene. “Is this chaise lounge taken?” asked a fellow whose named we’d later learn is Estefan. “Are you?” Jack replied. Next thing we knew, Jack was back in New York and announcing to Will and Grace that he was in love with the flight attendant. “He served me warm nuts, then put me in an upright and locked position.” Oh, and he just happened to be waiting in the hall to come in, mistake Grace for Will and address the actual Will’s imaginary jealousy of him and “Yack.” When at last Will and Grace were able to call it a night, they caught sight of their parents having sex. And that wasn’t even the most disturbing thing Grace thought she’d glimpsed till Will told her there had been a beagle on the bed. “Oh thank God,” she cried. “That’s what was wagging!” 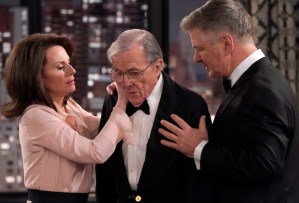 ‘HOW ABOUT ‘SAME TIME NEXT LIFETIME’?’ | Finally, Karen told Malcolm that she was letting him go. She was giving up her “perfect vacation” to stay with Stan, who remained her “home… and the surrounding properties.” Since she thought it a risky idea for them to share a goodbye kiss, he suggested that they take turns laying one on Smitty so that, by the transitive property, they could safely enjoy one last smooch. “You know,” she replied, “I hear that’s how Mike Pence and his wife have sex through his trainer.” Gazing into Smitty’s eyes, Malcolm said, “I’m really going to miss those gorgeous lips of yours” and puckered up. After Karen’s turn with Smitty, she and Malcolm got so handsy with the old guy that he excused himself by saying, “Hashtag ‘me, too.'”

Back at Will and Grace’s, the duo’s hopes that their parents hadn’t realized their hookup had had witnesses were dashed when the seniors got up and Marilyn cheerfully announced it, adding that it had been her first time with a Jewish man. “He was surprisingly Gentile,” she cracked, stealing Martin’s joke. Entering the scene with “Yack,” Estefan asked who’d ordered these old people. “That’s Will and Grace,” Jack replied. “You met them yesterday.” After Estefan deduced that Martin and Marilyn had knocked boots, she revealed that she was moving to the city so that they could see where their relationship went — and so they could both get more involved in their kids’ lives. Hearing that Martin and Marilyn were in love, Will argued that they were rushing into things like a couple of teenagers. “The fear of never finding the one,” chimed in Grace, “can lead to bad decisions.” 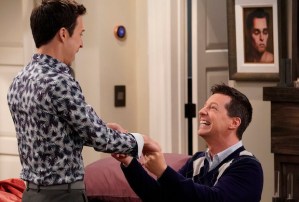 ‘OH GOD, IT’S A CONTAGION!’ | When Will tried to point out to Martin and Marilyn that a romance wasn’t a necessity for happiness — just look at how he and Grace always knew they’d have in each other their best friend — it had the opposite of the intended effect. The seniors didn’t want to be like their kids, so Martin turned to Marilyn and said, “Life is short, love is precious, so what are we waiting for? Sweetheart, will you marry me?” To Will and Grace’s horror, Marilyn said yes. Jack didn’t want to be like Will and Grace, either, and neither did Estefan. “I just met them,” he said in the only accent on TV thicker than Sofia Vergaras’, “and I don’t want to be like them.” So Jack asked Estefan to propose, he did, and his would-be fiancé replied, “Sí.”

Reeling, Will and Grace seized upon Martin’s request for champagne to run out for some… in France. Anything to get out of that apartment! Once in the hall, Grace said, stunned, “All the people who knows us the best are making life choices based on the fact that they do not want to be like us!” Will had scarcely gotten out the words “Not all of them” when off the elevator came Karen. She’d just chosen her husband over her lover, she said, so as to (wait for it) never end up like Will and Grace. Rubbing salt in the wound, Jack at that very moment stuck his head out the door to point out to the roomies that, when their parents tied the knot, they’d be brother and sister!

So, what did you think of the Season 9 finale? The parental hookup? Jack’s new fiancé? What “changes” should Will and Grace consider? Grade the episode in the poll below, then hit the comments.