DC’s Legends of Tomorrow this week had a bit of fun with a college-age Barack Obama — though a “kicker” to the president-to-be’s storyline nearly didn’t see the light of day.

As Season 3’s penultimate hour got underway, the Legends traveled to Occidental College circa 1979 to stop Grodd (the oversized, sentient and telepathic gorilla) from killing the future 44th President of the United States, thus freeing the time demon Mallus from his prison. (Cue Ray evoking The Flash by urging Young Obama to, “Run, Barry, Run!”)

Shortly after Obama was rescued, Sara stormed off the Waverider — flummoxed by the latest, Mallus-related crisis — to go talk to someone “who can think straight when the whole world’s gone crazy.” That someone was Obama, who after absorbing Sara’s incredible story, concurred that stopping a time demon requires a “more unorthodox approach” than the stuffy Time Bureau might offer. 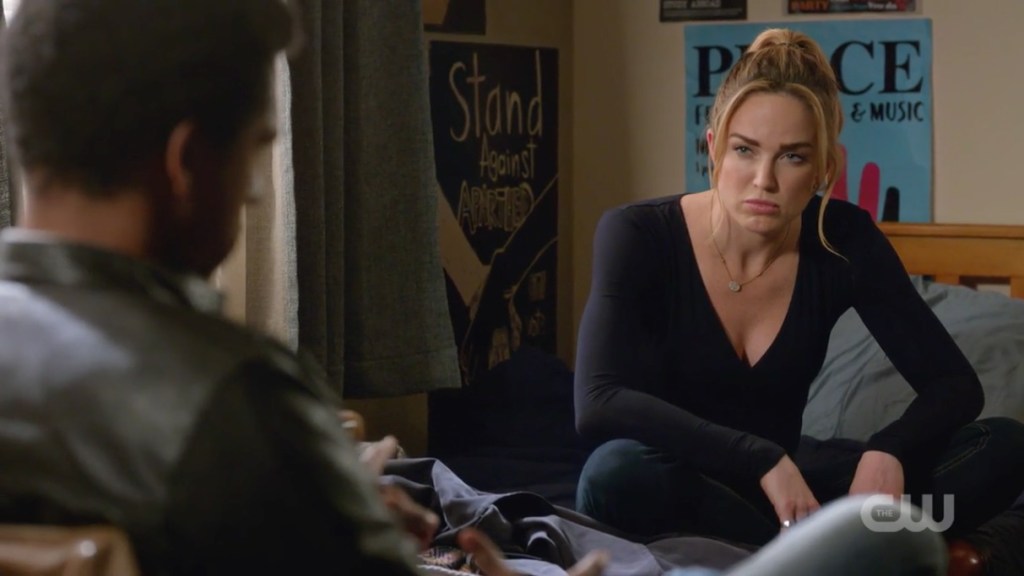 “We almost lost the scene where Sara went back and talked to him,” co-showrunner Phil Klemmer tells TVLine, “because we weren’t going to be able to make our days, we didn’t have enough money, and all the rest of that stuff.” The EP also freely admits that the Sara/Barry consult — after which she bittersweetly said, “I really miss you” (before flashing away his memories) — was mere icing on an already delicious cake.

“There’s a certain point where you realize, ‘This scene doesn’t need to be in the show. This is totally gratuitous, us sending a little ‘love letter’ to the ex-president,'” Klemmer says with a laugh. “But when I rewatched the episode last night, I was like, ‘Thank God we did keep in that totally superfluous love letter to the ex-president. And thank God we found a performer in Vancouver (Lovell Adams-Gray of Canada’s Slasher TV series) who played such a convincing Young Barack Obama!” With a nod to Adams-Gray’s affectation of Obama’s voice, Klemmer says, “He must have watched a lot of YouTube videos.”

Of course, now that the Legends have saved Obama’s bacon, might Season 4 include an appearance by a young President Donald J. Trump?

The CW’s Legends of Tomorrow airs its Season 3 finale on Monday, April 9 at 8/7c.