Grey’s Anatomy is bringing back a somewhat random face from the first half of its 14-year run, leading us to wonder, “Why? And to what end?”

Sarah Utterback, who recurred as Nurse Olivia Harper from the middle of Season 1 through early Season 6, is returning to the ABC medical drama in the Thursday, April 26 episode, EW.com reports. 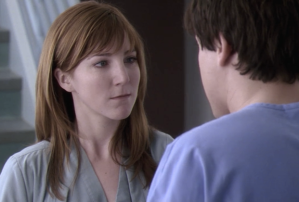 Back in the day, Olivia hooked up with — and contracted syphilis from — Alex, which she then gave to George O’Malley (left). So it’s anybody’s guess what the topic of conversation will be when she and her (um, how old???) son show up at Grey Sloan Memorial and are treated by Jo.

* Very Cavallari, a docuseries following The Hills alum/entrepreneur Kristin Cavallari, is in development at E!, according to Deadline.

* Netflix has ordered Paradise P.D., an animated comedy about a small town police department from the creators of Brickleberry and starring Sarah Chalke (Roseanne) and Dave Herman (Bob’s Burgers), per EW.com.

* Watch a new trailer for Season 4 of Showtime’s The Affair, premiering Sunday, June 17 at 9/8c: