Women with mustaches. Strawberry-flavored sensory deprivation tanks. Elaborate dance-offs. Yep, Legion is back — and just as audaciously weird as ever.

After an opening scene of Oliver Bird and his demonic companion Lenny lazily sunbathing (she giggles, “We’re trapped”) and some confounding narration from Jon Hamm about imaginary mazes that ends with “Welcome to madness” — thanks, Jon, but we’ve been here before; we watched Season 1 — Tuesday’s premiere kicks off in earnest with a seemingly paralyzed David getting rescued by Ptonomy in an abandoned nightclub. “Help them. They’re in the maze,” he struggles to say as a room full of people chatter their teeth in supremely creepy fashion. As Cary rushes him off to treatment in a medical tube, he assures David he’s safe now: “Welcome to Division 3.” Wait… what?

When David is revived — his first words: “Do you have any waffles?” — he gets up to speed on what he missed while he was zapped inside that orb. And it was a lot, actually: Summerland is now working alongside former enemies Division 3, led by Admiral Fukiyama, a mysterious guy who wears a basket on his head. There are women with mustaches and Sonny Bono bowl cuts, and heavily armed child soldiers walking around… it’s a strange scene, man. We get a Wes Anderson-esque introduction to the new organization’s various departments (Research, Tactical, Strategy) as Ptonomy explains they combined forces to battle the Shadow King: “He’s been Priority One since the day you… left.” 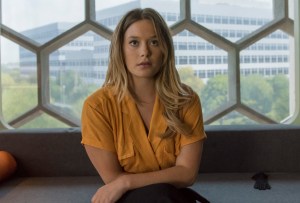 Yeah, when was that, exactly? David thinks that orb zapped him just yesterday, but when he reunites with his love Syd, she tells him it’s been more like a year: “362 days, if we’re being precise.” She’s noticeably guarded at first, as she catches him up on what he missed — “I found a gray hair. I like cherry pie now.” — but when he asks, “Can I kiss you?” she replies, “You better.” They end up making love on every conceivable surface: beds, walls, floors. Melanie Bird isn’t feeling quite as romantic, though. Abandoned by Oliver yet again, she’s paranoid and embittered, and has turned to drugs, inhaling the same vapor David was hooked on last season out of a jewel-encrusted elephant’s trunk. (We also get a sinister animated interlude narrated by Hamm about how rational ideas have to die for irrational ones to take hold, co-starring an oily, skeletal baby chick.)

The Shadow King is still residing inside Oliver, and he seems to be the source of that teeth-chattering disease; everywhere it pops up, he’s nearby. Admiral Fukiyama, aka Baskethead, calls in David to inform him they’re determined to destroy the Shadow King… even if it means destroying Oliver. The Shadow King is trying to reunite with Amahl Farouk’s original body, after which “he would be unstoppable.” So Division 3 wants to find Farouk’s body before he does. “So it’s a race?” David asks. Yes! A race! A tangible competition with a definitive outcome! Exactly what this show needs! 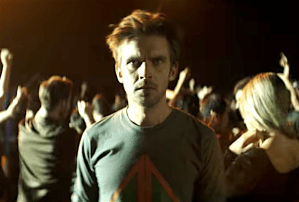 Ptonomy and Clark (the Division 3 interrogator with the scarred face) don’t believe David when he says he has no memories of his time in the orb, but to help jog his brain, Cary dunks him in a sensory deprivation pod filled with water, along with a dash of strawberry extract. (For conductivity… and flavor!) David is skeptical — “So I’m supposed to find the Shadow King from inside a daiquiri?” — but he gets in anyway and has a vision of entering a crowded nightclub, eventually coming face-to-face with Oliver and Lenny. And you know what that means: Dance-off! The three of them compete in an aggressive, intricately choreographed dance battle, complete with back-up dancers. (Even Cary dances back in the lab — and he’s great!) But the fun ends abruptly with David naked and huddled in a hallway, telling Syd, “I think I need to lie down.”

Back in Syd’s room, when she asks David what he saw, he says “just random things, and noise.” But she knows him well enough to know that’s not the full truth: “You’re keeping secrets.” She’s still hurt that he left her alone for the second time, and he makes it up to her by giving her a necklace with a compass on it that always points in his direction: “If we get lost, we get lost together.” (That’s what she said to him in Season 1, remember?) He promises no more secrets — but did we see his eyes dart to the side a little afterwards? Hmmm.

As David and Syd sleep, we get a flashback to David’s first moments inside the orb, where he sees… Syd! But she looks different: sad and weary. He tries to talk to her, but she can’t speak. Instead, she draws with a light wand, and he guesses what she’s trying to say. (It’s like a cosmic game of Pictionary!) She’s from the future, she says, and the Shadow King is looking for his body. Then she writes: “Help him.” (??) She ends with a giant heart before walking off into the darkness. David is left to wander through that nightclub again, hearing a voice recite the lyrics to Jefferson Airplane’s “White Rabbit,” utterly confused. Yeah, us too, buddy.

What’d you think of the Legion Season 2 premiere? Grade it in our poll below, and then hit the comments with your post-premiere thoughts.