Your days are numbered, Jaron Strom. The Voice on Monday began its Season 14 Knockouts, aka the rounds designed to discharge the last of the coaches’ cannon fodder prior to the Playoffs. So, before sitting down and tuning in, I was thinking that Jaron would soon be jettisoned from Team Blake, Gary Edwards would be dropped from Team Adam, Dallas Caroline’s nerves would at last be settled by her elimination from Team Alicia, and Jamella would get cut from Team Kelly (probably in a montage like both her Blind Audition and her Battle, poor thing!). Who actually got knocked out when past winners Jordan Smith, Chloe Kohanski, Chris Blue and Cassadee Pope returned to help prepare, respectively, Team Adam, Team Blake, Team Alicia and Team Kelly? And which contestant moved every single coach to try to keep her in the contest? Read on…

Team Blake: Kyla Jade singing “You Don’t Own Me” (Grade: A-) defeated Jaclyn Lovey singing “Put Your Records On” (Grade: D) | Singing first, Jaclyn — one of my absolute favorites this season — stumbled so badly, I couldn’t believe that she managed to finish her Corinne Bailey Rae cover with that sweet smile still on her face. She had to know it was a disaster, right? She was so pitchy, it made me genuinely sad; I (correctly, it turned out) feared she’d neither get saved by Blake nor stolen by another coach. Now then, Miss Kyla… In the comments, you’ve mentioned before that you felt, even when she was in the spotlight, she still carried herself like a backing vocalist. Well, I don’t think any of us can say that tonight. Though Lesley Gore seemed on paper like an awfully tame artist for Kyla to cover, by the time she started belting those choruses, man, did I get it. She wasn’t playing to the back of the auditorium, she was playing to the freaking parking lot. I know she was a little out of control at times, but frankly, that was part of the appeal. She left it all on the stage. 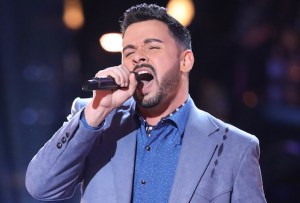 Team Kelly: Kaleb Lee singing “Free” (Grade: A-) defeated Justin Kilgore singing “Shameless” (Grade: C) | First at the mic, Kaleb made me wonder if I haven’t been underestimating him all this time. He’s not a showman like, say, Pryor Baird, but maybe what we get from Kaleb is sincerity a la Red Marlow. That was certainly who he reminded me of on his soft-as-denim Zac Brown Band cover. Was it a roof-raising barn-burner? No, but it tap-tap-tapped at my cold heart, and I have a weird feeling I’ll still be humming it Tuesday. (Now if we could just get him to fall back a smidgen less on his nice-dad-showing-off-his-cute-kids shtick. I’m sure it’s genuine and all, but it plays like a ploy, and one he doesn’t need.) As for Justin, in rehearsal, he explained that he intended to pack a lot of emotion into his Garth Brooks cover. Which sounded fine in theory, except that Justin has a slight tendency to come off overwrought. On stage, he kept it together for almost the whole song, then — d’oh! — kind of fell apart at the end. Once he failed to land that one painful note, he never managed to recover, so he was left poised to end the song on a metaphorically low note. 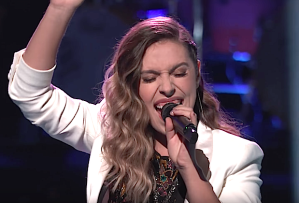 Team Adam: Mia Boostrom singing “Wade in the Water” (Grade: A+) defeated Jackie Foster singing “Bring Me to Life” (Grade: B) — Jackie stolen by Alicia | Up first, Jackie sang the verses of her Evanescence cover like she was taking the song’s title as an instruction — she brought that shizz to life, gorgeous, ethereal life. But on the choruses, though she hit those massive notes for which she’s so well-regarded, she overall fell a little flat. She wasn’t off, per se, she just didn’t seem on. (Maybe the hook’s call-and-response arrangement, without another performer actually being on stage to do the calls, made it extra hard not to come off karaoke-ish?) Mia, on the other hand, wasn’t just on, she was spot on. During her turn in the spotlight, she was a revelation, serving Jane Monheit realness as if she’d just wandered in from the Montreux Jazz Festival. Jackie was the contestant who inspired Adam to use his Save, and Blake, Alicia and Kelly to attempt to Steal, but for me, this Knockout was all about Mia. Her performance was powerful. Beautiful. Flawless. 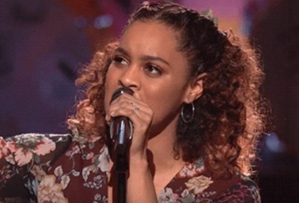 Team Blake: Spensha Baker singing “Broken Halos” (Grade: B-) defeated Austin Giorgio singing “Almost Like Being in Love” (Grade: B+) — Austin saved by Blake | As much as I love the idea of an old-school crooner being on The Voice, that’s about how much I love Austin’s execution of the classics. The slick whippersnapper sounds like he just stepped out of a time machine to introduce himself as a heretofore-secret member of the Rat Pack. On his Nat King Cole cover, Austin’s voice was as smooth as silk sheets, and he didn’t just own the song, he owned the stage, incorporating some fancy footwork into his performance along with vocal gymnastics. That said, going forward, he will have to watch how much bopping around he does, because as it did here, it can impact the flow of his singing. When Spensha took her turn in the spotlight, she traded the whiskey of Chris Stapleton’s song for bourbon. Unfortunately, as rich as her voice was, she seemed to be struggling. Perhaps she was just trying to keep from crying, since the ballad reminded her of a friend who recently passed away? She’s a helluva singer, this just wasn’t her most nuanced performance. 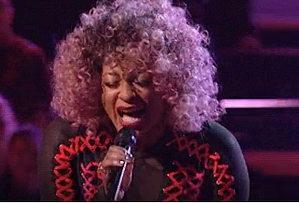 Team Alicia: Johnny Bliss singing “Alive” (Grade: B+) defeated Miya Bass singing “Castle on the Hill” (Grade: D) | As far as I can tell, Johnny is the human equivalent of a music producer’s soundboard — push a button, and out of him springs yet another ear-popping note. Want a falsetto? Click. There it is. Want some power from his pipes? Click. There it is. Want vulnerability to prove he isn’t really a machine? Click. There it is. On his Sia cover, Johnny just about emptied his bag of tricks, going from whispery-soft vocals to notes so big and forceful that the producers had to have begun considering seatbelts to keep the audience from being knocked out of their chairs. Toward the end, yes, he struggled, holding onto that last long note by a thread. But this was still a pretty dazzling reminder of why he’s a favorite (at least of mine). When Miya took to the mic… WTH? This was not the Miya that we’d been watching since the Blinds. She hit so many bum notes that even the coaches struggled to find anything more positive to say than, basically, “You’re better than this.” 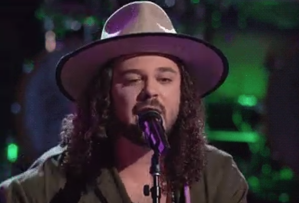 Team Adam: Jackie Verna singing “American Honey” (Grade: B) defeated Drew Cole singing “Slow Hands” (Grade: B+) — Drew saved by Adam | So poptastically polished was Drew’s rendition of this Niall Horan hit that, from the get-go, it sounded like the one direction he was headed in was forward. And it wasn’t just that, as usual, Drew maintained admirable control of his memorable voice, either. On top of that, his vocals were dead sexy, as casual and confident as the look on someone’s face when they know they’re about to get lucky. Even his big, showoffy note was casual, like, “Yeah, I can hit that. No sweat.” For her part, Jackie recovered nicely from her and Stephanie Skipper’s nightmarishly yelly “These Dreams” duet in the Battles by bringing to the Knockouts a much softer country number. Instead of challenging Jackie to sing louder than anybody else, this Lady Antebellum fave simply showcased her lovely, pure vocals, which here generally sounded as warm as the summer sun feels. And I had to give her bonus points for describing her sound as poultry — a mix of pop, soul and country.

So, who were you sorry/surprised to see get the chop? Who really knocked you out? Vote in the poll below, then hit the comments.