Imagine a group of individuals — some who, flashbacks reveal, aren’t what they seem — uniting to survive after being mysteriously stranded in a strange world….

Yes, Netflix’s Lost in Space is almost as much a reworking of ABC’s Lost as it is a spiffy reboot of the 1960s series that made “Danger, Will Robinson!” part of the classic-TV lexicon. But standing on its own, does it soar straight away or struggle to take off?

Described as a “reimagining” of the Irwin Allen-produced CBS serial, and with Zack Estrin (Prison Break) serving as showrunner, the new Lost in Space (premiering Friday, April 13) is set 30 years in the future, where the Robinson family’s bid to be part of a colonization of the planet Alpha Centauri is derailed by, well, a series of unfortunate events. Crash-landing on a planet situated “trillions of light years” away from Earth (and one where frozen tundras apparently butt up against lush forests), parents Maureen and John (played by House of Cards‘ Molly Parker and Black Sails‘ Toby Stephens), along with kids Judy, Penny and Will, are met with episodic crises that test their collective mettle.

In the course of enduring assorted odysseys, the Robinsons meet Parker Posey’s Dr. Smith, who, as the character briefly did in the ’60s series, harbors a hidden agenda. Rounding out the ensemble are Don West (Bones‘ Ignacio Serricchio), a charming fellow castaway who strikes sparks with brainy Judy, and the robot that Will, during a time of crisis, runs into and (as these things typically go) strongly bonds with.

Visually, Lost in Space is stunning, borderline breathtaking at times. (Money was spent.) The world the Robinsons find themselves in is richly realized and tactile, whether they’re spelunking into an arctic pool or clambering onto the branches of majestic trees. Their saucer-ish ship, the Jupiter 2, is convincingly sturdy (as it will need to be!) and not overly festooned with delicate, Apple Store-style gizmos. Even their “Chariot”/ATV is practically designed and nearly of our time.

As a fan of the original Lost in Space, which was conceived as an out-of-this-world Swiss Family Robinson — and realizing this redo would be far less campy (Oh the pain, how could it not be?) — I cued up the first five episodes made available for critics wanting to be blown away. And I frequently was. The cast is solid, the FX are top-shelf and the survival-related drama comes at a steady pace, with some episodes (the pilot included) delivering no less than white-knuckle sequences.

There are, though, aspects that occasionally bog down the otherwise rollicking adventure. 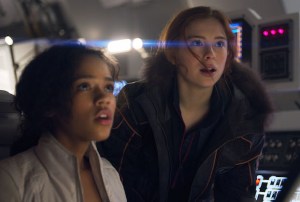 As alluded to by the Lost comparison, some characters come with a lotta baggage; in fact, one might think that added weight is what threw the Jupiter 2 off course. It’s no spoiler to say that unlike the parents played 50 years ago by June Lockhart and Guy Williams, this Maureen and John have complicated marital issues that arise again and again… and again. So though she is well-played by Parker, Maureen can be a bit of a buzzkill, while husband John in turn suffers, dismissed as he often is as a deadbeat dad. Who am I rooting for…?

Of the kids, Judy is featured (and Taylor Russell shines) in the early, peril-filled showcases, while Mina Sundwall’s Penny shoulders the series’ sparse spurts of comic relief — very much a teen prone to rebellion or the scarfing of precious creme-filled sandwich cookies. (So light-hearted is her vibe, she sometimes seems to be in a different show.) As Will, Max Jenkins accomplishes exactly what he needs to, portraying a lad who sees the humanity in a robot that others are inclined to side-eye. 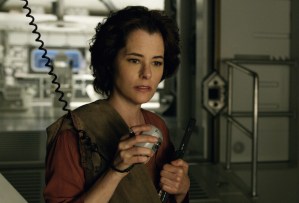 The portrayal of Dr. Smith is a curious and ultimately captivating one. At first, I was like, “OK, Parker Posey is doing Parker Posey.” But as the shady shrink’s flashbacks started unspooling, wonderfully dark, devious (and occasionally hysterical) edges revealed themselves. And I was sold. It’s scene-stealing stuff, punctuated by a mane that seems Aqua Net’d in a wind tunnel. Serricchio’s Don starts off as a bit of a cipher/goof, though by Episode 5 he gets fleshed out, his own “secret life” revealed.

“Robot” in his native state is an original and eye-popping display of CGI, articulated with myriad limbs sprouting from multiple directions and wearing mood ring-like lights for a face. Once he adopts humanoid form (and is played by someone in a costume), Robot loses a little a bit of his specialness, though the “whirrr” that underscores his every swivel is a nice, sometimes creepy touch.

THE TVLINE BOTTOM LINE: Replacing the original series’ Dr. Smith-dictated camp with slick visuals and heavy doses of drama, the new Lost in Space is a thrilling ride.