With a body count that easily reaches double digits, it might sound strange to describe BBC America’s new crime drama Killing Eve as “fun.” But dammit, it is fun — an addictive and surprisingly witty thriller powered by two remarkable female performances, and a welcome counterbalance to dour, moody British crime dramas like Luther and The Fall. (Who says you can’t solve murders and have a laugh, huh?) 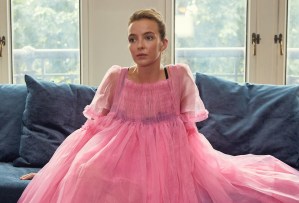 The killer at the center of Killing Eve — premiering Sunday, April 8 at 8/7c; I’ve seen five of the eight episodes — is Villanelle (The White Princess‘ Jodie Comer), a highly skilled contract killer whose stunning good looks allow her to slip in and out of crime scenes undetected. (She blends in seamlessly at an Italian wedding before stabbing a guy with a poison hairpin.) She’s a coldblooded psychopath — when shown a photo of a dead man hanging from a noose, she flatly comments, “Nice legs” — and armed with a brazen self-confidence, convinced she can’t be caught. As an investigator notes after her latest flamboyant kill: “Frankly, she’s starting to show off.”

Her main adversary is Eve (Grey’s Anatomy alum Sandra Oh), a British intelligence analyst who’s bored out of her gourd by her thankless desk job. (The series paints Eve and Villanelle as opposites at first: Eve lives in a humble flat with a sweet but dull husband, while Villanelle treats herself to expensive gifts and has wild group sex.) Eve is a touch morbid and obsessed with female assassins — “I’m just a fan,” she insists — and has a hunch that Villanelle’s handiwork is that of a woman. When her male superiors are too lazy to pursue it, she breaks protocol to do it herself and gets fired for it. She’s quickly recruited, though, by a female intelligence agent who puts Eve in charge of tracking down Villanelle. But she warns Eve that working undercover may make her husband think she’s cheating on him: “They all think we’re having affairs before they think we’re secret agents,” she sighs.

Killing Eve‘s razor-sharp wit is what elevates it above the standard crime drama, and that comes straight from the pen of Phoebe Waller-Bridge, who also created and stars in Amazon’s sex-com gem Fleabag. Her writing here (based on the novellas by Luke Jennings) is relentlessly clever, with a staunchly feminist point of view and a pitch-black sense of humor. Every scene is spiked with laughs, which helps lighten up the admittedly dark subject matter, especially as the dead bodies start to pile up. Even the small roles are affectionately written and acted, from True Blood‘s Fiona Shaw as deadpan spy boss Carolyn to Penny Dreadful‘s David Haig as Eve’s hapless superior Bill. 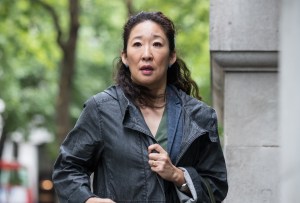 But the real strength of Killing Eve comes from its two lead women, who are both fascinating in their own way. Eve and Villanelle seem like complete opposites, but their lives actually parallel each other: women in male-dominated fields, often underestimated and brimming with untapped passion. Comer is an absolute revelation as Villanelle, in a star-making performance: seductive and terrifying, juggling multiple accents and shifting emotions on a dime. Oh’s work as Eve is less flashy, but no less impressive. The former Cristina Yang skillfully balances comedy and drama, with Eve’s early fumbling giving way to a ferocious determination. (And thank heavens Oh doesn’t have to shoehorn in a British accent: Eve, we learn, is from Connecticut.)

After years of slogging our way through endlessly grim crime dramas, Eve‘s fast-paced, lighthearted tone is downright refreshing. Villanelle’s international kill missions have a nice bounce to them, and the intense game of cat-and-mouse between her and Eve recalls the mutual obsession of Hannibal‘s Dr. Lecter and Will Graham, only with a more playful, feminine edge. The tension ratchets up beautifully as these two women circle each other, on an inevitable collision course. Killing Eve would make an ideal binge-watch, actually, with each episode leaving you wanting more. It’s just a shame these women are so determined to take each other down — because that means we won’t get to watch them chase each other across the globe for years to come.