I was already feeling pretty conflicted about my enthusiasm over ABC’s just-renewed Roseanne revival. Then Roseanne Barr went and took that congratulatory call from President Trump, and my feelings of ickiness morphed into a full-blown case of nausea.

There was no getting around it: I’m a two-faced hypocrite.

To give you a little context, I am not a Trump supporter. I’m opposed to pretty much everything the man stands for. The litany of, to quote the USS Callister‘s badass Captain Cole, “red f—king lines” that The Donald has crossed is too long to list in its entirety, but suffice it to say it includes bragging about sexually assaulting women, calling immigrants rapists and declaring that not all white supremacists are bad.

As a gay man, I consider his anti-LGTBQ rhetoric and policies to be a literal danger to me and my community. He chose a running mate who believes in conversion therapy. He has vowed to appoint conservative Supreme Court justices who would outlaw same-sex marriage. And then, of course, there’s his recent transgender military ban.

As if gay kids don’t have enough to contend with, now their bullies have the President of the United States telling them that their bigotry is not only justified, it’s as all-American as baseball and apple pie. And it’s unconscionable. And it has led me to sever relationships with Trump supporters who don’t 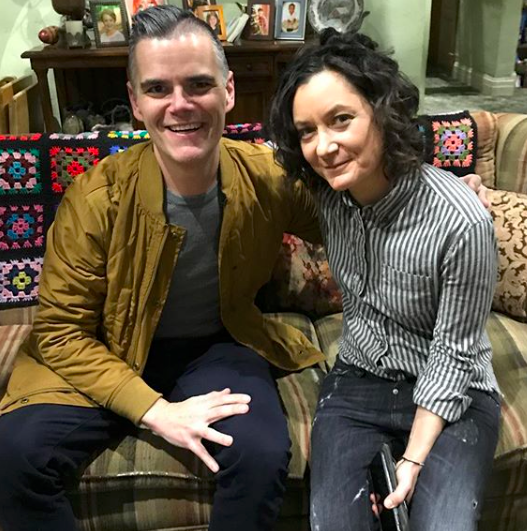 view any of this as a deal-breaker. As I harrumphed to a longtime friend on Facebook last summer shortly after Trump first announced the trans military ban, “You can’t support a bigot and then deny you are a bigot.” And then I unfriended her. This isn’t about harboring a different political opinion, this is about humanity and decency and values and, I’ll just say it, the chasm between right and wrong. I can’t in good conscience share a Diet Coke with someone who supports an administration that believes my very existence is illegitimate.

But I can enjoy a television series whose star does exactly that and then takes it a step further by demanding that her trailblazing, forward-thinking role model of an alter ego adopt the same stance without exhibiting so much as an ounce of remorse or regret, without even a hint of inner conflict? It doesn’t seem like I should be able to do it. So I’ve spent many a waking hour attempting to justify my hypocrisy. For example, I argued to myself…

♦ Yes, Roseanne Conner is a Trump supporter, but the show itself remains a beacon of inclusiveness, as evidenced by the family’s open mind towards Darlene’s gender-fluid son Mark! Also, the next seven episodes are all Trump-free, so I can pretend like the premiere never happened!

♦ Star and exec producer Sara Gilbert was able to reconcile being a proud real-life lesbian with not only working alongside a Trump acolyte but agreeing to infuse the revival with a pro-Trump message, so it must be OK!

♦ Roseanne is my favorite sitcom of all time, and it’s back and in peak form, and I need this show now more than ever, and I’ve been through some s–t and I’m allowed to be a hypocrite and, besides, no one has called me on it yet!

Yep, for a while there, I managed to sell myself on all of the above arguments — over and over again, in fact. But then Barr went and took that congratulatory call from Trump, and the two of them spoke effusively about it afterward.

Trump, with a major assist from Fox News and its ilk, is pushing a narrative that Roseanne‘s ratings success is a victory for him and an endorsement of his bigotry, and Barr is adding legitimacy to the false equivalence by playing right along with him. It’s disgusting. I’m disgusted.

But am I disgusted enough to stop watching? I hope so.