Actual worlds are at risk of colliding this Sunday at 8/7c, as Starz’s Counterpart delivers a freshman finale that tees up a “mind-boggling” Season 2, says series star (stars?) J.K. Simmons.

In his first TV drama since bidding The Closer adieu — and after earning an Oscar, Golden Globe and SAG Award for his starring role in 2014’s Whiplash — Simmons portrays not one but two Howard Silks. One is a kindly desk jockey at the mysterious Office of Interchange in Berlin, whereas his counterpart from a parallel world is a master spy. To draw out a mole in this world, the doppelgängers traded sides, leaving our Howard to warm up his wife’s own icy alter as well as bond with the daughter he never had; “Prime” meanwhile has uncovered secrets about his other’s quiet life and most recently survived a coordinated assault on the O.I., by sleeper agents from his own world.

To the outside, it reads as really confusing, while to those who have been watching, it’s really terrific TV. Simmons for one saw the series’ tremendous potential early on, as detailed in this in-depth TVLine Q&A.

TVLINE | When Counterpart first came your way, how quickly were you “all in”? Did you just need to hear a verbal pitch for the series? Did you need to read a script?
It was really just one script. But then when I went to meet with [series creator] Justin [Marks] and [executive producers] Morten [Tyldum] and Jordan [Horowitz], I really did not think I was going to do the job because the plan at that time was to shoot the whole thing in Romania. I met them because I really liked the material and I wanted to meet Morten and Jordan, and I was a fan of Justin’s writing, but I actually didn’t think I would do the job because my kids are in high school and I don’t want to leave town for five months.

So when that subject came up and I said that the only way I could take on a long-term project like this is if it was shooting in L.A., much to my surprise the three of them kind of looked at each other and said, “All right, we’ll shoot it in L.A.” I had just won a bunch of trophies when we had that meeting, so I guess I was throwing my weight around. [Chuckles] 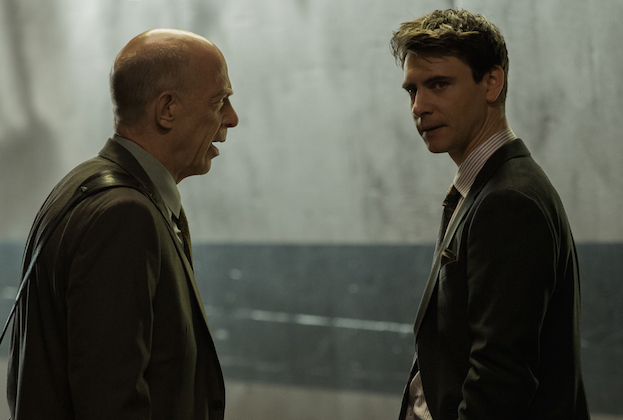 TVLINE | For us men of a certain age, there is of course something sexy about playing the steely spy version of Howard. Where did you find pleasure in playing his comparatively meek counterpart?
When I first read the script, I hadn’t gotten the pitch about, “Oh, it’s dual roles” or any of that. I said, “Don’t tell me anything about it. I just want to read it.” So the milder, meeker, kindler, gentler Howard was the first one I met when reading, and I thought he was a really compelling, lovely character. And then it was a complete surprise to me when we get to the big reveal, that there’s this other version of him that’s more of a hard-ass. I had a visceral, physical, jumping reaction in my seat when I was reading that, which is something that I wish audiences could experience, but the vast majority of people won’t because they sort of know what’s coming. But yeah, I think of the meek, mild Howard as our protagonist. There’s a lot that I connect with in him and maybe more so, actually, than the super spy Howard.

TVLINE | Plus, as our Howard you get to have these beautiful interactions with, like, Prime’s daughter. I mean, who gets to meet their child as a fully formed person? It was such a complex series of scenes for you and Sarah Bolger as Howard tries to be something to Ana that she refuses to let him be.
That was one of the things that at that first meeting, when we talked about where the story might go and where the characters might go, Justin had had in mind from the beginning. One Howard would have this child that the other Howard did not have, and that would be a really rich, dramatic aspect to be able to play. 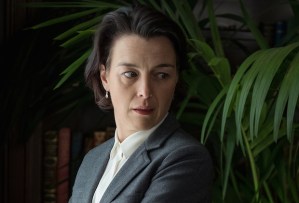 TVLINE | On the flip side, I want to pick your brain about the moment Prime found out exactly who Andrei, Howard’s Go partner, is. I felt there were so many things going through his head. Like, was he sad for our Howard? Was he sad for himself? Was he kind of relieved to see that Emily is a cheater everywhere, that it wasn’t just with him? Or was it all of those emotions going on?
Yeah, I think it’s really complex. There are a lot of thoughts going through that brain. Whether he wants to really admit it or not, there’s an empathy for himself, for the other version of him. At the same time that he belittles [his counterpart] and mocks him and treats him like he’s less than, [the discovery] is like an ice pick into his heart, too. So there’s that anger, that wrath and that heartbreak, but also and really almost predominantly there’s the realization, “Oh wait a minute. This guy is not a spy. This guy is not part of the whole underworld intrigue.”

TVLINE | He’s just a philanderer.
He’s just the guy who’s been screwing this guy’s wife. And the fact that Andrei responds the way he responds [by wetting himself] is very cathartic and satisfying [Laughs], so yeah there’s a lot going on there. No lack of emotions to play.

TVLINE | What non-Howard elements of the series fascinate you?
Well, I’m always drawn to character over plot, as an actor, but this is really the first time that I’ve been involved in a project that is so intricately plotted and long-term plotted, so I’ve really come to appreciate primarily Justin [Marks], but also everybody — the staff, the writers, the directors, the rest of the cast, and their attention to the sort of minutiae of the spy games and of this world that Justin created. That aspect of the work has me responding like I’m as much a fan as I am a participant.

TVLINE | As alluded to earlier, you did pick up more than a few film awards in the couple of years prior, so does a project like this re-energize your love for what the TV form can pull off?
TV certainly is evolving. People talk about this being the new “golden age of television,” and I think shows like this — and there are certainly a lot of other great examples — are a really nice hybrid, stylistically and in terms of content and execution, between television and a high-level feature film. When you start out with the pedigree of the guys involved in the project, it’s got that — and I hate to use the term — “high-end” TV feel to it.

I’ve done a lot of things in television. The first-ever drama on pay cable was Oz, and I’ve done The Closer. I’ve done Law & Order, the network thing. I did a couple of network sitcoms in the last handful of years. I was happy to go back to this sort of long-form storytelling, and also to do it at a place like MRC and Starz where you have a little more leeway creatively than you do on the more traditional broadcast networks.

TVLINE | Looking ahead to the finale…. Coming out of the last episode, we’ve got this lone surviving gunman, “Angel Eyes,” who stormed the O.I. and now is bleeding out smack dab on the border between the two worlds. How delicate of a situation does that create and what kind of effect does that have on the two Howards?
I mean, that has a ripple effect on everybody in that classic sort of “demilitarized zone,” that “no man’s land” there. I certainly am not going to give away anything, but it does complicate matters for the Howards — and for many other people.

TVLINE | And what do you want to say about the final moments of the season? Is it more like, “I can’t believe that just happened!” or does it give us a sense of what Season 2 will entail?
I think there’s a little of the latter there. Lord knows, there have been, and I’m sure will continue to be, major curveballs that Justin and the writers will be throwing at us. There is some stuff that Justin tells me about as we’re discussing the overall [Season 2] arc, and where we’re going is definitely mind-boggling.

But what’s great, from again from the actor’s perspective, is that because it’s a collaboration, I haven’t felt like we’ve “jumped a shark,” or like they’re putting me in a position as an actor where I have to play stuff that I just find completely unbelievable. Once you buy into the construct of the parallel world, it’s all very grounded and real. It’s really complex and continues to be surprising. 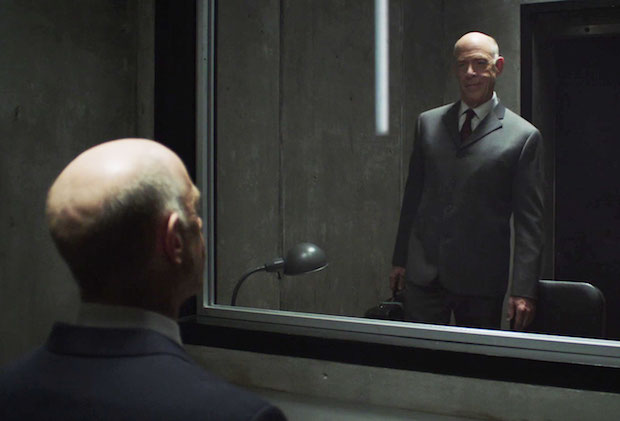 TVLINE | Lastly, I need to talk about the recent Interface scene with the two Howards, because I was fascinated by how we could see in the partition the reflection of one J.K. Simmons overlapping our direct view of the other. How were we seeing a reflection of your other performance?
That was really my favorite scene to play of playing both Howards, just because technically speaking we kind of hit some bumps early on with the “two Howard” scenes — especially with the two Howards plus [Quayle and Aldrich], which, frankly, was kind of a technical pain.

But by the eighth episode, we had gotten to a point where just technically, camera-wise and everything else, the director and the minds that are better than mine had figured out a way to really do it seamlessly, where I was just playing the scene, one-on-one, with my stand in. My double, John Funk, is doing all of the same preparation work that I’m doing, he’s learning both parts, and then it’s just a high-tech version of cutting and pasting after that.

As far as playing the scenes, it made it much more organic and kind of took some of the impediments out of the way that we were having early on, when I had a little “bug” in my ear and my timing was being dictated by something that wasn’t really happening — you were looking at a blank spot, or an actor who just had to sit there like a mannequin. I’m certainly not the only one playing two versions of a character, and as we go on into Season 2 it’s not too much of a spoiler to say that you’ll see more of that with other cast as well. So I’m glad for everybody’s sake that we found some really good ways to make that work.