This week on Agents of S.H.I.E.L.D., we learned exactly what makes United States Air Force General Hale tick, via a backstory chockablock with Marvel-verse references.

Upon welcoming Coulson to his sparse room within her bunker, Hale advised him to hear her out, because it is time — for S.H.I.E.L.D. and Hydra to unite in a cause. First leaping back to “28 Years Ago,” we see a teenage Hale ready to graduate from Hydra’s training program, champing at the bit to learn where she will be placed as a sleeper agent. (Cue cameo by a young Jasper Sitwell of the MCU; see right.) 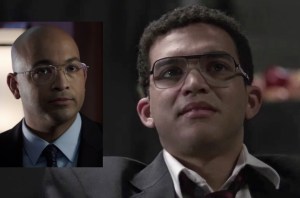 During one of Hale’s classes, Daniel Whitehall touts a new program to create a super soldier that will put Steve Rogers to shame, by infusing human cells with the properties of raw materials.

Polling the class for application ideas, Baron Von Strucker suggests tapping into the Tesseract once wielded by Red Skull, while Hale one-ups her rival by proposing we look forward — into outer space — for new materials. Embarrassed, Von Strucker picks a fight with Hale during gym class, only to get his ass handed to him. After beating on the boss’ kid, Hale is given her assignment, to… conceive/serve as a vessel for the child that will one day be transformed into Hydra’s super soldier. Hale balks and pleads for a fate better suited to her skills, but she is rebuffed. 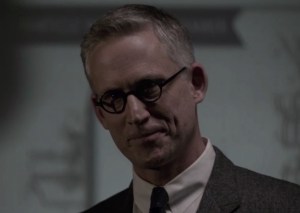 Jumping ahead to “Two Years Ago,” we see that Ruby was in fact that very special child, bred to be the perfect subject for the Particle Infusion Chamber — although, her professor reminds Hale, Whitehall is now dead, as also may be his wishes. We then learn that Hale’s Hydra colleague General Fischer has been found out, but before General Talbot and his men close in on him, he hands off to Hale the key to a room hiding a communications device of some sort. After Fischer takes his life before Talbot can grab him, Hale ends up gunning down the problematic professor standing in the way of Ruby’s destiny.

Now at “Six Months Ago,” Hale retrieves General Talbot from the hospital where he has (barely) been recuperating from LMDaisy’s gunshot. Given that Talbot’s career is over and his family is frightened by his erratic behavior, Hale counsels him to find a new purpose, by leading her to the stash of confiscated Hydra goodies, Whitehall’s Particle Infusion Chamber included. Hale reveals the Chitauri device that her predecessors had not only used to communicate with an alien Confederacy but struck strike a deal for protection, from a war coming to Earth. But once Talbot gleans Hale’s Hydra allegiance, he clams up and refuses to hear her out any further.

That brings us to “24 Hours Ago,” where Coulson (like many before him) is foraging through compound’s breakfast offerings (“Ooh — Oops! All Berries”) when he first meets Hale’s daughter Ruby — and somehow divines that she is the one who lopped off Yo-Yo’s arms. Hale demonstrates the communications device, to introduce Coulson to her alien intermediary, and then explains the deal in place: in trade for gravitonium, Inhumans and such, the aliens will help humans avert a war on Earth. When Coulson argues that the Confederacy could just turn on them, Hale concurs, adding that altering the “deal” is in fact her plan. And to that end, they will need the “Destroyer of Worlds” (as Whitehall nicknamed the super soldier program) to fend off alien warships that alas look nothing like Thanos’ (as revealed in Thor: Ragnarok).

Thing is, even Hale doesn’t think Ruby is ready — but Daisy Johnson is. Coulson of course shoots down the idea of super-charging Quake, revealing how he has traveled to the future and witnessed the damage that Hale’s plan will wreak. Disappointed with his mansplaining, Hale has Coulson dragged away. Later, Ruby visits Coulson to find out how she failed in her future mission — only to learn that her obsession, Daisy Johnson, will apparently steal her thunder.

* Detained Fitz argued that he could help out the team if he was let free to access computers, but May and, more aggressively, Daisy, refused.

* Jemma outfitted Yo-Yo with new arms, while Mack worried how she will handle the sense of invulnerability, seeing as she has already been living like she cannot die.

* Seeing Fitz’s frustration/helplessness, Jemma handed him an engraved tool of his… and then handed him the real one, explaining that the other had been handed down to Deke by his grandfather. “But… he’s the worst,” Fitz grimaced. “Our daughter is going to marry some space goon and give birth to a Deke!” To which Jemma countered, “No, Fitz. It means you and I are invincible.”

* Urged by May to rise as a leader and divine what Hale’s end game is (including how Coulson figures into it), Daisy is off to find young Robin, the seer.

What did you think of the episode “Rise and Shine” ?