The following contains major spoilers from this week’s episode of Arrow.

The CW’s Arrow this Thursday bid adieu to one of its original cast members, when a new threat led one of the heroes to leave Star City.

Setting the stage for the send-off: Some Merlyn family chickens came home to roost when The Thanatos Guild, a rogue offshoot of the League of Assassins, surfaced in Star City to track down a mysterious box that Malcolm, their former Demon’s Head, had left behind. In their pursuit, the Guild squarely targeted Malcolm’s daughter Thea. And though Team Arrow was able to neutralize the imminent threat, they in doing so realized that Malcolm had discovered three Lazarus Pits, that needed to be dealt. Thea decided it was her responsibility to find and destroy them — and her recently resurfaced longtime love, Roy Harper, volunteered to go along for the wild ride.

TVLine invited Arrow showrunner Marc Guggenheim to discuss the events leading up to Willa Holland‘s departure from the series she has called home since Day 1.

TVLINE | How long has this been in motion, the plan to write out Willa?
By the end of Season 4, Willa had expressed a desire to reduce her episodic commitment to the show and that was sort of done in sort of conjunction with an indication that it was likely that she wouldn’t want to renew her contract past Season 6. So, we’ve kind of known for a while that this was in the offing. We revisited it with Willa at the beginning of Season 6, and she indicated that she hadn’t changed her mind, that she was still interested in moving on.

We talked about some requests she had for us in terms of how her episodes would be utilized and grouped, and at what point in the season she would be written out, and we accommodated her on all those fronts because, look, at the end of the day we love Willa and we love working with her. She’s done right by us and so we wanted to do right by her.

TVLINE | It’s my understanding that part of what made it difficult for you, in considering her wish, was removing this important part of Oliver’s family.
That’s the thing. Apart from not getting a chance to work with Willa, that was probably the most painful aspect of it, because when we adapted the Green Arrow comic to live-action, one of the earliest and the biggest changes we made from the comic was to give Oliver a family. In the comic, he didn’t have siblings and his parents were both dead. This was a significant relationship for him and also, I think, one of the most effective elements of the show. The relationship between Stephen and Willa on camera was wonderful. But though we went into the season knowing that he’d be losing this relationship, we also knew he’d be— 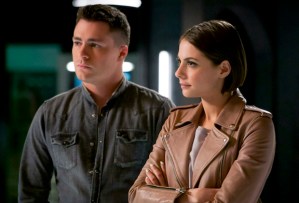 TVLINE | Was it all that Colton Haynes needed to hear, that he was coming back for Willa’s sendoff, to get him to sign on for another encore?
Actually, it’s funny — no. I had bumped into Colton on the Fox lot months earlier and we started talking and he expressed a desire to come back to the show, because he had a window of free time. I was like, “Actually, that works out great!” It worked out really, really well because we always knew that in a perfect world, Thea’s departure from the show would involve Roy in some way. Roy’s been such a big part of her story that [Colton’s return] was a fortuitous circumstance. 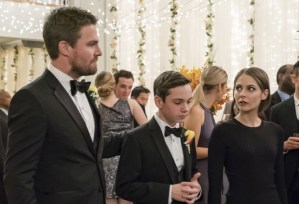 TVLINE | Knowing that Willa would be leaving, as this season unfolded I got to speculating that you might “kill two birds with one stone” and send William away with Aunt Thea. That’d help ease Oliver’s concerns about returning to his role as Green Arrow.
Oh, that’s interesting. No, we never talked about that. Quite frankly, in many ways this season is about removing all the structures and support systems that we had created for Oliver over the course of Season 5. To a certain extent one can be very reductive and sort of describe every season of Arrow as “Oliver is put through some kind of meat grinder.” We spent Season 5 building up the team and really diving in with Felicity and giving them a son, and then this year a lot of those support structures go away, and that’s what constitutes Season 6’s “meat grinder.” The idea of sending William away with Thea never occurred to us.

TVLINE | That’s why you do what you do and I do what I do!
I think it would be a perfectly valid story, though.

TVLINE | Outside of Oliver, will Lance be most affected by Thea’s departure?
Good question. We didn’t really get a chance to tell too much of a story about Lance saying goodbye to Thea. I think that they had a lot of bare, emotional closure moments earlier in the season. Truth be told, it’s really focused very much on Oliver. Like I said, that was one of the key relationships and earliest inventions that we made and it was very important to us to not distract from what Oliver was going through.

TVLINE | Oliver did, though, give Thea his blessing.
Yeah, actually in the episode that preceded it, Oliver plants the idea in her head. He basically says, “Look, if you’re telling me that you’ve only been happy with Roy, then you should go with him.”

TVLINE | That was a great scene. Very emotional.
They were terrific. Again, that’s one of the things that’s hard about this is — Stephen and Willa are always terrific together. Their scenes are always really great scenes. At the same time, we are very philosophical about it — “This is the sort of thing that happens when you go past five seasons.” People start to reach the end of their contracts. People start to think about other opportunities. They want to stretch their legs creatively in different directions. This is a reality as old as television itself. So, you just wish everyone well.

Honestly, the final scene in particular with Stephen and Willa is wonderful. Stephen actually had a terrific idea to basically make that scene evoke Oliver and Thea’s reunion in the pilot (see below), so there’s a real wonderful sense of everything coming full circle.

What did you think of Thea/Willa’s send-off?