Zach Braff ain’t no scrub in his return to primetime.

Alex, Inc., a new family comedy which debuted on Wednesday, is based on the life of Alex Blumberg, a former This American Life producer who left his job to launch the highly successful StartUp podcast, backed by venture capitalist/frequent Shark Tank panelist Chris Sacca.

Here, Braff plays Alex Schuman, a veteran radio producer who quits his job to launch his own podcast company, and does so without consulting his beloved wife Rooni (The Good Place‘s Tiya Sircar). She’s not exactly thrilled, but agrees to support her husband’s venture as long he doesn’t tap into their 401K.

The next day, Alex meets with his second cousin Eddie (The Sopranos‘ Michael Imperioli), who agrees to come on board as his business partner. There’s also Deirdre (Drunk History‘s Hillary Anne Matthews), a former colleague who is obsessed with Alex and excited to be his segment producer. They go to see a potential office space, where the landlord requires three months’ rent up front. The only way to afford it is for Alex to borrow from his 401K, and Eddie convinces him to go ahead and do it. Note: It’s the third big decision Alex has made without Rooni, and we’re only eight minutes in.

Lest we forget, Alex and Rooni have two kids: the wise-cracking Soraya and aspiring magician Ben (relative newcomers Audyssie James and Elisha Henig, respectively). Alex is forced to take Soraya with him when he goes to pitch his podcast to Chris Sacca, and the investor has just one question for him: What’s your company’s unfair advantage? Alex doesn’t have an answer, and Sacca bails. 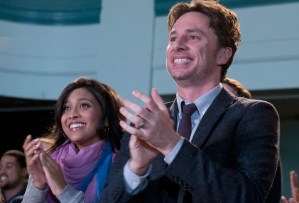 Afterwards, Alex and Soraya race to Ben’s talent show, arriving just in time to see the young illusionist make his debut. Everyone’s expecting the worst, but Ben manages to pull off his disappearing-girl-in-box trick. Alex, who was worried Ben would embarrass himself, now gets to tell his son how proud he is. The confident kid responds by telling Dad that “people who think magic is lame just haven’t seen the right person do it. No one thinks radio is cool, but when you do it, it’s amazing.” These words inspire Alex to round up the family and speed off towards the airport for a second chance to pitch to Sacca.

Upon arrival, Alex drives right through a security stop point and pulls up next to the investor’s private jet. There, he tells Sacca that his unmatched ability as a storyteller is his company’s unfair advantage. Rooni chimes in to suggest that the podcast be about Alex’s efforts to start a business, and the Shark agrees to fund it. Moments later, the police arrive to arrest Alex, and he attempts to run away (in handcuffs!) as the episode draws to a close.

Grade the series premiere of Alex, Inc., then hit the comments to flesh out your thoughts.