Just when you thought you’d seen Alex O’Loughlin do it all as Hawaii Five-0‘s brave and bold Steve McGarrett, the series lead has a new trick up his sleeve — making his directorial debut with this week’s episode.

In “To Do One’s Duty” (airing Friday at 9/8c, CBS), the ex-wife of the man who shot Danny (back in the Dec. 15 episode) comes to Oahu, teeing up flashbacks that detail how Danny’s actions back when he was in New Jersey helped save her life. Elsewhere, Tani and Junior walk the beat as uniformed officers for a day, while Adam is framed for the murder of the crime boss he has been tracking.

There’s a lot going on, to be sure, but O’Loughlin was ready to rise to the occasion.

TVLINE | By my math, the last cast member to direct was Daniel Dae Kim back in Season 5. What made you decide that the time was right?
I’ve wanted to direct for a while, but there were a couple of things that made it possible. My schedule as an actor on this show has progressively gotten a little better over time; [previously] I’ve sort of been in everything all the time and not had any days off to even think, let alone prep an episode and direct. Even this season it was cutting it kind of fine; most people get a week to prep-and-scout and do all this stuff, while I had two days. But it’s definitely something I’ve wanted to do the whole time and I’m really glad I did.

TVLINE | What’s nice is they didn’t just give you three storylines to juggle within the episode, but they’re each tonally different. Tani/Junior are played a bit for comedy, the investigation into Adam’s framing for murder gets intense, and Danny’s backstory is pretty emotional.
Right. Right. I was a little overwhelmed, actually, at first. I was like, “S—t, three stories and they’re so different and require so much focus,” but it was good. And to be handed an A-story that is as important as the one that I was given, about a subject matter that is as serious and important as domestic violence against women, was a big responsibility and I didn’t take it lightly. I did everything in my power as a storyteller and as a director to honor that story. It was a challenge and it was met with appreciation. 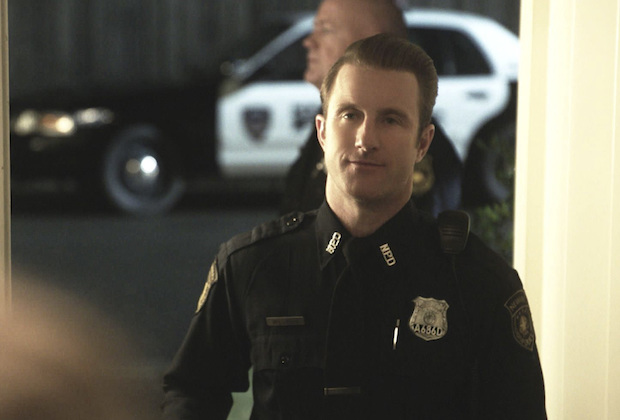 TVLINE | Seeing as that story takes place largely in flashback, what special challenges did it present to you as director?
What was challenging is you have to understand, first of all, the world that you’re living in, in the sense that I’m not doing a $100 million movie. I’m not doing a $1 million movie. I’m doing 42 minutes of network television, and that’s very specific. I have very, very little time, and the resources I have are limited to where we are, which is Hawaii — and mate, there’s a palm tree every 10 feet here.

TVLINE | I was thinking about that as I watched the Newark scenes.
Yeah, yeah. There are no steam vents [on the streets]. There’s no subway. There’s nothing here that resembles the East Coast. I mean, I did my best. Especially for the night stuff, I tried to wet everything down to make it feel colder. I tried to put people in jackets and boots, but there’s only so much you can do without putting steam coming out of their mouths when they breathe.

[Making] Scotty [look 20 years younger] was easy. I’m not going to digitize his face, but what I can do — and he was really cool and really open about all this — is darken his hair to make it less blond, and have him wet shave with a razor…. Just a couple of little details that aren’t so obvious that we focus on them, but that sort of help us work in the space. 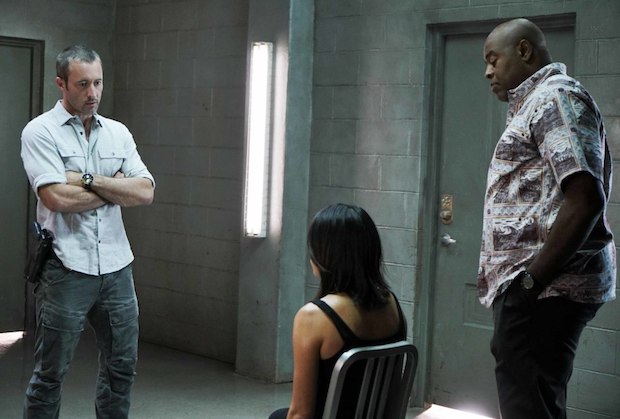 TVLINE | You directed some action scenes as well, including a car chase that segued into a foot chase. How involved does the director get in those particulars, or at that point does a special team take over?
I was very involved. The car chase, I handed some of it over to [stunt coordinators] Eric [Norris] and Paul [Lacovara]. But then of course I had to shoot the foot chase and be in the foot chase, and the funny thing about that was that I shot so much. [Laughs] We could have had 42 minutes of just foot chase. But the action stuff is kind of breezy for me, it comes to me naturally. I’m a physical guy, and my brain is little different — I’m a little “crazy” — so I think of crazy things, and they show me ways of shooting it.

TVLINE | Looking further down the road, I see that Joe White will be back….
As a matter of fact, because of Scott’s schedule, the one that Terry O’Quinn is in and which is my “story by” credit, we’re shooting it now as [Episode] 25, but it’s going to play as 24. We’re having so much fun. I really wanted to do a SEAL Team episode with [showrunner] Peter [Lenkov], and I was shocked, man — I thought that maybe they’d consider this story for Season 9 if we get to a Season 9, so the fact that he dropped it so soon speaks to how incredibly prolific he is when wants to make something happen. It’s rad.

We are currently working with two SEAL techs, Jim Beck and Steve Kaplan, who are the real deal and incredible dudes. We’re all great mates, we dive together on the weekends, we train together… so to be able to be a part of writing something that involves getting them in the show as Navy SEALs and sort of going through all the movements has been a blast, man.