Even trained assassins aren’t immune to the acting bug in HBO’s new comedy Barry, starring SNL alum Bill Hader as a bored hitman who gets seduced by the bright lights of Hollywood — or the San Fernando Valley, rather.

When we meet Hader’s Barry, he’s in a hotel room with a dead body lying in the bed. He’s an Iraq War veteran and an efficient killer, but he comes home to an empty apartment, and he tells his handler Fuches (Stephen Root), “I think I’m just burnt out.” Fuches has a new assignment for him, though: Fly to sunny L.A. to meet with an eyebrow-less Chechen mobster, who wants a personal trainer named Ryan whacked for sleeping with a friend’s wife. Simple enough, right? 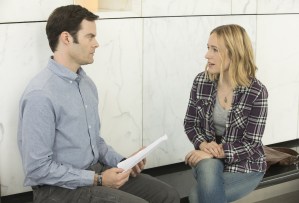 It gets more complicated when Barry follows Ryan to an acting class in the Valley and interrupts a student named Sally (Hindsight‘s Sarah Goldberg) rehearsing an expletive-filled monologue outside. Barry ends up getting pulled on stage with Ryan to perform a scene from True Romance — Ryan dons a dreadlocked wig to play the Gary Oldman role — and when the class applauds, Barry’s face lights up. The other struggling actors (including The Good Place‘s D’Arcy Carden and You’re the Worst‘s Darrell Britt-Gibson) welcome him with open arms and invite him out for drinks afterwards, and when his eye catches Sally’s on the dance floor, he looks more at ease than we’ve ever seen him.

Barry raves to his handler Fuches about the class, and now believes acting “could be my purpose.” He insists he can still be a hitman on the side, but Fuches reminds him that plastering his face on TV and movie screens isn’t really conducive to working as a hired killer. Plus, the Chechen mobster saw him palling around with his target, and they’re not too happy about it. So Barry reluctantly puts his acting dreams on the shelf and ditches the acting class to concentrate on his day job. 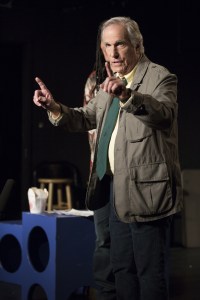 But he can’t quite bring himself to give up, so he approaches the acting teacher Gene (the legendary Henry Winkler) to ask him if he has any potential. Gene flatly says no — but then Barry launches into a rambling story about his journey from Afghanistan to working as a hired assassin, and Gene is impressed: “What’s that from?” He agrees to take Barry under his wing… as long as he pays for class in cash, and in advance. (Barry also starts reading Gene’s acting book: Hit Your Mark and Say Your Lines.)

In all the excitement, he realizes he almost forgot to kill Ryan, and by the time he gets there, the Chechens have offed him already with a newly hired sniper. When the sniper turns his gun on Barry, though, Barry shoots him dead, along with the mobster and his driver. He takes refuge at a nearby diner, and as cops swarm outside, he notices the waitress has a script under her arm. She’s an actor, she says. “So am I,” Barry replies.

Now it’s your turn: Grade the Barry series premiere in our poll below, then hit the comments to share your post-premiere thoughts.