What a difference five years can make.

Sunday’s American Idol, which marked the final night of Season 16 auditions, ended with the return of a familiar face, at least to those who watched the show’s 12th season really closely.

Before melting the judges’ faces with a killer rendition of the Animals’ “House of the Rising Sun,” 24-year-old Ada Vox recalled making it to the Top 50 in 2013, back when they were “just a chubby little Latino boy” by the name of Adam. But post-Idol life wasn’t kind to Ada. “People attacked my weight, my sexuality,” Ada recalled, adding that it led to “contemplating lots of things that I shouldn’t have.”

Thankfully, Ada’s confidence returned ten-fold, resulting in a bombastic audition for the books. Frankly, I applaud the fact that Ada’s story was made into a focal point at all, given Idol’s tendency to shy away from directly confronting LGBT issues. (There was another contestant who discussed her marriage to a female Army soldier, which I also appreciated.)

On that note, let’s discuss 14 other memorable (for better or worse) auditions: 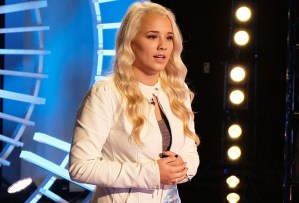 GABBY BARRETT, 17 | This self-proclaimed daddy’s girl lives by one simple motto: “You’ve got to have rain to get to the rainbow.” (Her rain, apparently, was traffic. There was a lot of traffic on the way to her audition. Plus, she had to travel with a bunch of dogs in a hot car. Gross!) Her hand-clapping, boot-stomping performance of Carrie Underwood’s “Good Girl” (which was very on-brand!) showed off an impressive range and even a hint of a growl, but the judges wanted more. And when they decimated her options — no Underwood and no “Redneck Woman”? You monsters! — she decided to go full gospel, a risk that paid off big-time. The judges may not have been able to agree on whether Barrett sounded more like Demi Lovato or Nicki Minaj (huh?), but they did agree that she belongs in Hollywood.

CAITLIN LUCIA, 22 | Dressed like she just stepped straight out of the movie Coco, this Perry devotee treated the judges to an unexpectedly gorgeous rendition of “I Kissed a Girl.” Floored by Lucia’s performance, Perry admitted, “I think you might have sang it better [than me].” When Hollywood Week rolls around, we’ll find out if the judges’ suspicions — that Lucia has a “bigger motor” than she showed in her audition — proves accurate. 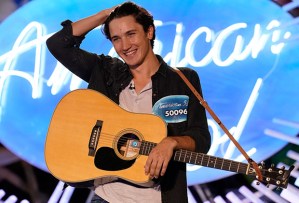 DRAKE MILLIGAN, 19 | This true-blue Texan stepped up to the mic following a montage about Elvis Presley — which included a woman claiming to be the King’s “sixth cousin,” as well as a crooner who made me question the validity of reincarnation — so I feel I was justified in worrying that we might have another mere impersonator on our hands. And, sure, Milligan is literally an award-winning Elvis impersonator, but he’s so much more than that. He’s smooth, he’s soulful, and as Perry says, “He’s a star in the making.”

MYLON SHAMBLE, 24 | With a voice as unique as her name, this fur-vested siren delivered the best version of “Stand By Me” that Perry has ever heard. She and Luke Bryan literally tried to make it rain golden tickets on her, but since supplies are limited, Shamble sadly had to settle for just taking one.

LEE VASI, 20 | Lest there be any confusion, this is probably one of the worst things you can hear from an American Idol judge: “Oh my God, what is she doing? Why is she doing that? Stop doing that!” Yet those were Bryan’s exact words for Vasi after the singer — whose up-and-down audition began with a duet of the Commodores’ “Zoom” opposite Lionel Richie — let her nerves get the best of her. Like, she really blew what should have been a flawless performance of Toni Braxton’s “Love Should Have Brought You Home.” Still, the judges have faith in her abilities; they gave her the ever-popular speech about how she could go all the way if she’s willing to work with them. (Seriously, how many times have they told singers that this season?!)

BRIELLE RATHBUN, 18 | She may not have been the first singer to choose Sara Bareilles’ “Gravity” this season, but Rathbun certainly performed it the best. (I imagine that came as a relief to Perry, who once again gushed over how much she loves that song.) The judges praised the ease of Rathbun’s voice, explaining that “when it looks natural, it’s good stuff for us.” Perry, in particular, remarked that Rathbun’s voice manages to be smoky and raspy without losing its power. 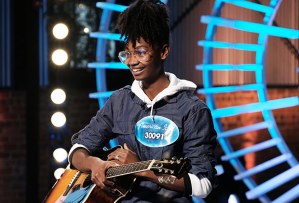 AYANA ‘ROSE’ LAWSON, 22 | The judges struggled to judge Lawson on her performance, rather than her backstory, which included a difficult upbringing and several years of homelessness. Unfortunately, her sweet, simple rendition of Bonnie Raitt’s “I Can’t Make You Love Me” just wasn’t enough for the heartbroken judges. “I want for you,” Richie told her, explaining that he just doesn’t think she has the voice, experience or confidence to make it in the competition. But Bryan encouraged her “to the moon and back” to keep singing, so hey, that’s… something, I guess?

SAMUEL SWANSON, 28 | No more “squeezing nipples” for this country boy! Following Swanson’s pitch-perfect performance of Al Green “Let’s Stay Together,” Bryan eloquently described his voice as “velvet, velvet and then layered with silky velvet.” Richie even compared the effortless quality of his voice to that of Luther freakin’ Vandross. (If you’re wondering why Swanson’s headpiece was so big, it’s because it’s full of talent.)

JURNEE, 18 | Considering her life has been “nothing but rainbows” ever since coming out to her family — and meeting her wife, soon to be deployed in the Army — it makes perfect sense that Jurnee would be described as “just like a little bird” by Perry, whose jaw rested comfortably on the floor for the duration of Jurnee’s incredible audition.

Other singers worth discussing…

* Imagine Motormouth Maybelle from Hairspray singing Cee Lo Green’s “F–k You,” and you’ve got 26-year-old Tory N. Teasley‘s audition. Yeah, it was as great as it sounds.

* Lucy Clearwater, 19, dedicated a sultry acoustic performance of “Baby Got Back” to Bryan, prompting some light spanking from Perry.

* Consensus: Does anyone actually think that bathrobe-clad Jarom Eubanks, 20, was serious about his audition, a screechy rendition of R.E.M.’s “Losing My Religion”? Like, I’m not even sure that was his real name. Hell, I’m not even sure he was a real person. (Did anyone else see him?!)

* The love child of Florence Welch and KT Tunstall, 25-year-old Carly Moffa “let the lion out” with an original number dedicated to her ailing mother.

* Sure, Richie had to literally shake the nerves out of Michael J. Woodard, 20, but that invasion of personal space proved completely worth the effort.

Which of Sunday’s auditions stuck with you, for better or worse? Drop ’em in a comment below.