The Kids’ Choice Awards were held on Saturday evening, where Netflix’s Stranger Things took home not one, but two orange blimps, including Favorite TV Show.

Millie Bobby Brown, who accepted the award for Favorite TV Actress, was dressed in a #NeverAgain shirt, and was the first of multiple winners and presenters to mention March for Our Lives, the student-led marches organized by the survivors of the Marjory Stoneman Douglas High School shooting in Parkland, Fla.

“The March for Our Lives demonstrations that took place all over the world today have inspired me, and impacted all of us in one way or another,” Brown said. “I’m fortunate to be here tonight to receive an award as an actor. I’m so grateful… for the opportunity that our show, Stranger Things, has created for me… I get to be up here, privileged to have a voice that can be heard and one that can hopefully make a positive difference and help influence change. There’s an amazing support — a love and kindness in this room right now, and I want to tell everyone to embrace it and pass it on. For the angels among us, your spirit lives on.” 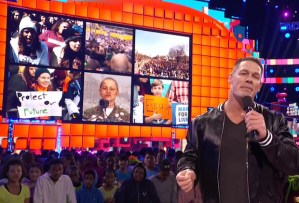 Host John Cena also took a moment to address the gun control protests at the top of the show, saying, “I know it’s going to be an amazing night, but kids everywhere have already made it an amazing day.” Images from marches in Washington, D.C., Florida and Los Angeles were shown on screen behind him.

Your thoughts on this year’s KCAs? Drop ’em in a comment below.