Just call her TGIT’s new firestarter. Former Grey’s Anatomy co-showrunner Stacy Mckee delivers her first original Shondaland series tonight with the debut of the firefighter-centric spinoff series Station 19 (9/8c, ABC). Below, the exec — who launched her Shondaland career 14 years ago as an assistant on Grey’s — tackles a half-dozen burning (get it?) questions about the offshoot and her extremely amicable breakup with Grey Sloan Memorial.

TVLINE | Why firefighters? Were there other conceits discussed?
I had a long list of possibilities. I went in to talk to Shonda [Rhimes] and Betsy [Beers] with the list in my hand, but the first one I pitched was firefighters and we never got to the rest of them. 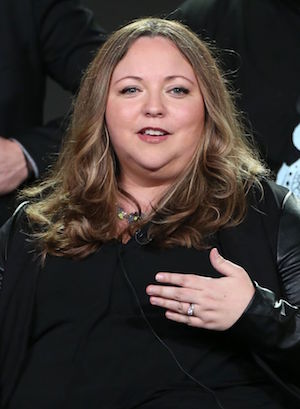 TVLINE | The existence of Chicago Fire wasn’t a concern at all?
No, not even a little. There are a million medical shows; there can be a million fire shows. If the shows are compelling, why not have more than one? It was never a concern. I just knew the [firefighter] world would work really well in conjunction with the already established world of Grey’s Anatomy.

TVLINE | Is it weird to be watching Grey’s now not knowing what’s coming up?
It’s both weird and amazing. Now I can just be a fan and watch it and scream at my television. It’s awesome. We went to Seattle to shoot the pilot and piggybacked on a couple of Grey’s scenes and I was like, “What’s this scene? What episode is it in? Tell me more. Give me spoilers!” [Laughs]

TVLINE | What’s your favorite thing that your successor Krista Vernoff has done at the helm?
I love the shift in tone. The humor and the heart is definitely present right now in a way that is really welcome in a lot of living rooms. There are a lot of dark things in the world, so it’s nice to go home and laugh.

TVLINE | Every press interview you do about this show will begin or end with a question about crossovers. So, any big Grey’s crossovers planned for later in the season?
We’ll see. [Laughs] Not officially.