Supernatural creator Eric Kripke has moved on to helming time ships on NBC’s Timeless, but he still gets some perks when it comes to the CW series — like an early sneak peek at the show’s upcoming crossover with Scooby-Doo.

“I haven’t seen the live-action bookends yet, but I did get slipped all the animated stuff, which I have seen… and it’s amazing! It’s so awesome!” Kripke tells TVLine. “As a kid who grew up on Scooby-Doo, it’s one of the moments in my career where I’m, like, genuinely starstruck. I cannot believe the show I created is crossing over with something as iconic as Scooby-Doo. I’ve been around a while now, but this one really blew me away. This was truly amazing.”

As for the unique installment’s storyline, Kripke predicts that viewers will be surprised by its content. “I think what people aren’t expecting is how subversive an episode it is,” he says. “It’s not just like a typical, goofy Scooby-Doo episode. It’s way more an episode of Supernatural, where it really pokes fun at the Scooby-Doo format itself. There’s some really fun meta stuff.” 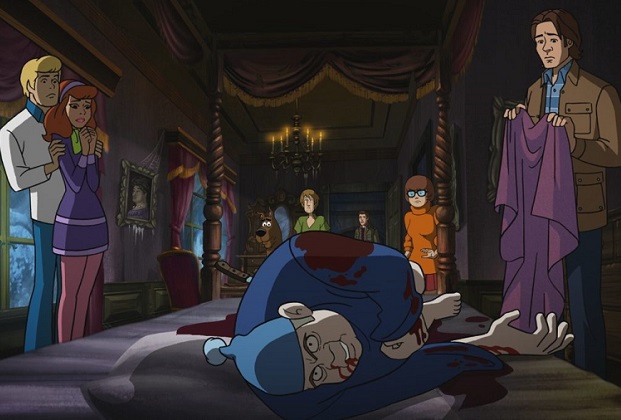 And since this is Supernatural we’re talking about, where the horror tends to get gory, “I can promise you this: It’s the most violent of any Scooby-Doo episode you’ve ever seen,” Kripke declares with a laugh. As seen in the accompanying photo, “there’s real and legitimate violence in it. So there are these moments where the worlds collide that skew more towards Supernatural, that are quite subversive and pretty irreverent.”

The “ScoobyNatural” episode airs next Thursday, March 29 at 8/7c on The CW.