This week on The Good Doctor, Jared reconnected with a former patient, while another MD suffered a major health scare.

The aforementioned Dr. Kalu was delighted to see Celeste, the woman whose third-degree burns previously took away most of her skin. At the time, the doctor applied tilapia scales as part of an experimental procedure that would allow her real skin to grow back over time. Five months later, she was back for a consult, and there was an obvious attraction between the patient and her physician.

Jared was pleased to inform Celeste that he’d be able to remove the fish scales, and assured her that she was “going to look beautiful.” She returned the following day, and asked that Jared tell her a painful story to help mask the actual pain she was experiencing during the procedure. He then proceeded to fill her in on his current troubles at work, as well as his job interview in Denver.

Later that day, Jared searched the Internet to see just how big a risk he’d be taking if he pursued a romantic relationship with Celeste. He ultimately took himself off her case, appointed Shaun to oversee any additional follow-ups, then asked her out on a date. But was it all for nothing? At the end of his shift, Jared opened a letter from Denver Memorial confirming that he had been accepted into their residency program. Bye-bye Dr. Kalu? 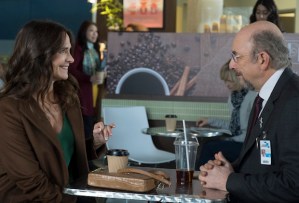 Love was also in the air for Dr. Glassman. Shaun played matchmaker and set him up with cafeteria barista Debbi (played by Lost vet Sheila Kelley, aka Richard Schiff’s real-life significant other). After an awkward chat over coffee, the two struck a bond over their shared love of classic cars. They later embarked on their first official date, where all was going well until Glassman asked for the check.

“We’ll just take the doorstop,” he said, before laughing off the initial flub. But then it happened again, and the doctor grew anxious and began mumbling. He then pointed towards his head, as if to say that something was hindering his speech. Debbi asked the waitress to call an ambulance as the hour drew to an unsettling close.

* Shaun and Park assisted Andrews with Gretchen, a teenage patient who was born with a rare neurological condition impairing the muscles that control facial expression. She was at the hospital for an elective surgery that would give her the ability to smile — hence the title of the episode. Shaun didn’t quite understand why smiling was so important (and spent much of the hour trying to figure it out), but his objections to the procedure were not what prompted the patient to at first decide against it. She was worried it would put her father in financial ruin. Andrews managed to convince her insurer to cover 85-percent of the cost, and they went through with the procedure. They initially struggled to wake her afterwards and feared she was braindead, but it turned out she was simply under deep, deep anesthesia. She eventually woke up, and the surgery was deemed a success. 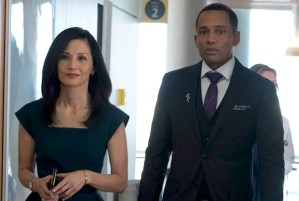 * Allegra later applauded Andrews for going “above and beyond” for Gretchen, touting his efforts as “very presidential.” It’s probably not a coincidence that this exchange occurred shortly before Glassman’s medical scare, seeing as how Andrews was angling for the hospital head’s job in the series pilot.

* Melendez, Claire and Reznick dealt with a truly bizarre case. A woman, who went by the name Lucy, was in the ER with a post-op infection, having never filled her prescription. By the time the doctors returned to check on her, she was gone. Turned out she wasn’t Lucy after all, but actually an identity thief. Her name was Beatrice, and she had stolen the real Lucy’s identity because she couldn’t afford her medications after paying for her son’s college tuition. She ultimately died. The real Lucy turned out to be a pill-popper who Reznick helped check into rehab.

* At the top of the hour, Shaun ventured out of his apartment to discover a bottle of milk sitting at his front door. Attached was a letter from “best bro” Kenny, which read, “Thanks for being there for me!” The doctor returned home from work later that day with a pizza and knocked on Kenny’s door, only to discover that his neighbor had taken his 70-inch TV without asking so his friends could watch a basketball game. He then blocked Shaun from coming in, telling him that his “quirks” wouldn’t be accepted at this particular social gathering. He then took Shaun’s pizza without asking, and closed the door in his face. Yeah, this dude’s actual human garbage.

What did you think of “Smile”? Drop a comment below with your reactions to the episode.