Unfortunately, that’s pretty much all that can be revealed ahead of the game-changing episode, which takes place entirely within a therapy session between Stewie and Dr. Cecil Pritchfield (voiced by Ian McKellen).

“When you know a character this well — and I have been writing him for almost 20 years — it’s kind of a gift to be able to say, ‘I’m just going to see where this takes us and where this goes if we start going inside his real thoughts,'” writer Gary Janetti tells TVLine. “He’s a very complicated person to me and he’s very much a real thing. I have such affection for him. He’s my favorite character that I’ve ever written, so to get a chance to really explore him like this was a gift.” 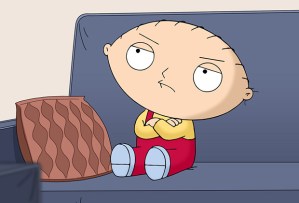 As TVLine previously reported, Stewie’s sexuality — yes, I know he’s a baby — will be among the topics addressed during the conversation with his therapist, but Janetti echoes executive producer Rich Appel’s sentiment that it’s only “the tip of the iceberg” in terms of what we’ll learn.

Explains Janetti, “I almost addressed that in terms of, like, people are going to think that’s what this episode is going to be about — Stewie’s coming out. And it’s not. It’s about something much deeper.”

If I may editorialize for a moment, Sunday’s episode — which will air without any commercial interruptions — is as hysterical as it is heartbreaking, proof that some risks are absolutely worth taking. And if you’ve been a fan of the show for any decent amount of time, your mind will be blown. That’s a promise.

Hit PLAY on the video above for an exclusive sneak peek Stewie’s therapy session, then drop a comment with your hopes for the revealing episode below.