Lifetime has set its sights on a late summer start date for You.

The 10-episode series follows a bookstore owner named Joe (Badgley), who becomes obsessed with aspiring writer Beck (Once Upon a Time‘s Elizabeth Lail). He soon turns to social media to keep tabs on her and remove any possible obstacles that stand in the way of their romance. Executive producers Greg Berlanti (The Flash) and Sera Gamble (The Magicians) co-wrote the pilot, which is adapted from the Caroline Kepnes novel of the same name. 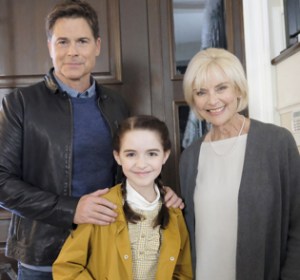 Leading into the premiere of You will be a remake of the 1956 film The Bad Seed (at 8/7c), starring, executive-produced and directed by Rob Lowe. The Code Black star plays father to a demonic young girl named Emma (Designated Survivor‘s Mckenna Grace), who may or may not be responsible for a tragedy that took place at her school. Patty McCormack, who earned an Oscar nomination for her role as Rhoda Penmark in the original film, co-stars as Emma’s psychiatrist.

Will you set your DVRs for You? What about The Bad Seed? Drop a comment below.