How to Get Away With Murder‘s fourth season came to a close Thursday night in much the same way its previous three seasons have ended: with a lot of questions answered, then waaayyy more of them introduced.

Among the answers we did get over the course of this hour: the identity of the victim from last week’s car crash (it probably wasn’t who you expected); the Supreme Court’s ruling in Annalise’s case (it was probably exactly what you expected); and whether Wes has actually been alive this whole time. (JK! That’s not addressed, because even you conspiracy theorists in the comments section presumably know the answer to that one.)

But just about every plot resolution in Thursday’s season ender pulled at the thread of an entirely new storyline. Though the ABC drama has yet to be renewed for Season 5, Pete Nowalk & Co. certainly didn’t treat this hour as a conclusion of any kind.

Let’s break down the answers to some of those pressing finale questions:

WHO DIED IN THAT CAR CRASH? | That would be District Attorney Denver, which means we can probably congratulate whomever was running against him in that attorney general election. Shortly after Nate breaks the news of the car accident to Annalise, the two of them meet up at a parking garage, where they are joined by a very-much-alive Bonnie — I knew they couldn’t have done you so dirty, Liza Weil! — who suggests that Jorge was tracking her calls and heard her reveal to Annalise that Denver had the hard drive. (And given the news report that suggests Denver’s brakes were tampered with, it seems highly likely that Jorge was responsible for the D.A.’s demise.)

Following Denver’s death, Nate decides to do some more research on the man, who seemed to have endless skeletons in his closet when he was alive. During his digging, Nate discovers a case that Denver had left marked as an open (but restricted) investigation, even though Nate thought the case had been closed. When he visits the evidence locker for the case in question, he finds Dominic’s cell phone, Laurel’s hard drive and the files that Denver had been keeping on Annalise and her band of misfits.

Then, despite telling Bonnie that he destroyed Denver’s files, we later find Nate looking through them, and Denver’s intel on Bonnie is especially intriguing: At the bottom of some DNA test results, which are listed as an exact match, Denver had written, “Child alive?” (You might recall an earlier Season 4 episode that clued us in to Bonnie’s tragic childhood. In that horrifying hour, we learned that one of Bonnie’s sexual abusers had gotten her pregnant — but when she woke up after passing out during labor, her father told her that the baby had died. Given Denver’s cryptic comment, though, it could very well be that Bonnie’s (awful, manipulative, truly despicable) father had lied to her about her baby. Weird how that keeps happening on this show.)

SPEAKING OF BABIES, DOES LAUREL EVER GET HERS BACK? | She does, but not without some more Castillo family drama. After Annalise gets her hands on Laurel’s hard drive via Nate, she informs Jorge that she has the device, then offers him a deal: She’ll give him the hard drive, if he agrees to recant his testimony against Laurel so she can get custody of Christopher. Jorge claims that he loves Laurel more than anything, but she’s capable of things Annalise doesn’t yet understand. Annalise, in turn, reminds Jorge that he’s responsible for the death of Laurel’s great love, so he should really just sign the paper and let her have her baby, right?

In a rare turn of events, Jorge actually does the right thing and signs the paper, allowing Laurel to get her baby back. But when Jorge visits the hospital to say goodbye to his grandson, Laurel makes it clear that she wants nothing to do with her father for the foreseeable future: “[Mom] is dead to me. As are you.”

Later, once Laurel (who is now living with Bonnie) settles in with her baby, Frank tells Laurel that he’s running out to buy diapers… but he’s dressed suspiciously nicely for a quick errand at the grocery store, wouldn’t you say? Frank spins a very Frank-like tale about all of his casual shirts being covered in spit-up, but we soon discover the real reason for his classy attire: orientation at Middleton University! Because he clearly did well enough on his LSAT to enroll in the school’s law program! Yay, Frank!

But when Frank arrives at Middleton, he overhears one of the orientation leaders flirting with a new student named Gabriel Maddox. That name seems to pique Frank’s interest, and he makes a call to someone whose identity we don’t learn: “Hey. So, the good times didn’t last too long. Her kid is here.” But whose kid? Bonnie’s? Annalise’s? Someone else entirely? Season 5, where are you?! 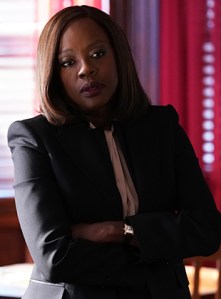 DID LAUREL HURT HER MOM? | Uh… maybe. The last time we saw Laurel and her mom together, Laurel was furious after learning that Sandrine had been involved in Wes’ death after all. But did she do anything to harm the woman?

Throughout the episode, Laurel maintains that she didn’t do anything to her mother — physically, at least. Apparently, she encouraged Sandrine to kill herself, which horrifies Annalise; given Sandrine’s mental health issues, she might have taken Laurel’s suggestion seriously and actually committed suicide.

The hour ultimately concludes before we learn what happened to Laurel’s mother. But at the end of the episode, when Laurel hops in the shower after bringing her baby home, we see she’s got some serious scratches on her arms. But who put them there?

DID ANNALISE WIN HER COURT CASE? | She did! It’s not often that we can add a tally mark to the “win” column for Annalise — or anyone on this show, really — but it seems her monologue to the Supreme Court had the desired effect. And not only did she win the case, but she’s hailed on the news as “a legal powerhouse on a national level,” a far cry from the disgraced woman we saw at the start of Season 4.

WHAT ABOUT SIMON? | Oh, poor Simon. He just can’t catch a break. At the start of the finale, Simon’s immunity deal is still a go, provided he agrees to blow the whistle on Jorge Castillo and Antares. But Simon begins to get antsy throughout the hour, and he threatens to go to the police with everything he knows about Annalise and her students, unless he sees cold, hard proof of the Antares files on Laurel’s hard drive.

Knowing full well that it will take too long to sort through the hard drive for anything incriminating about Antares, Annalise takes a different approach: She goes to Tegan Price and asks her to blow the whistle on Jorge’s company, revealing to Tegan that D.A. Denver was on Jorge’s payroll. And even though Tegan’s verbal response to Annalise is, “Get the hell out of my office,” her nonverbal response is a quick note scrawled on a piece of paper: “I’m in.” She agrees to anonymously sign an immunity deal under the name Jane Doe, which results in Jorge Castillo getting arrested by the FBI just a few minutes after Laurel retrieves her baby from the hospital. He gets slapped with a few different charges upon getting handcuffed, including the murder of Denver.

As for Simon, Annalise meets with Bonnie and the students later that day to tell them all charges against Simon will be dropped, as long as he signs an affidavit that says he brought the gun to Caplan & Gold’s party that night. The deal seems simple enough… until Michaela reveals that, despite Annalise warning her not to, she called Immigration and Customs Enforcement and anonymously reported Simon on a felony gun charge, which is grounds for deportation. Agents from ICE are coming to Simon’s hospital room to get the ball rolling on his deportation as we speak — and even though Michaela’s friends are aghast at what she’s done, Michaela is proud of herself for having the guts to do something that Annalise wouldn’t.

Other noteworthy moments from the finale:

* After revealing the truth about why he took a break from law school — he failed out, didn’t drop out — Connor reapplies to Middleton, no doubt encouraged by Annalise’s brutally honest remark that he needs to “get his ass back into law school.”

* Bonnie’s colleague Ronald Miller, with whom she’s previously had a contentious relationship, is tapped to replace Denver as the new district attorney. Following his promotion, he decides to bury the hatchet with Bonnie, remarking that his job will go a lot smoother if he gets along with his associates. (And judging by a moment later in the episode, when Bonnie and Ronald connect with each other on a dating app, it seems both of their jobs could be going very, very smoothly in the near future.)

* Asher officially breaks up with Michaela and moves out of her apartment, relocating to Laurel’s place once she moves in with Bonnie. Michaela, apologetic as ever, tries to convince her ex that she’s not evil, she just did an evil thing — and it seems that explanation could also apply to Michaela’s cold-hearted call to ICE, no? But there is a bright spot for Asher, despite the messy breakup: He’s going to be Oliver’s best man!

That’s a wrap on Murder‘s fourth season! What did you think of Thursday’s finale? Grade it in our poll below, then hit the comments with all of your thoughts!