NBC on Tuesday lifted the curtain on Rise, an engaging musical drama about… well, a lot of things.

From executive producer Jason Katims (Friday Night Lights, Parenthood), it tells the story of Lou Mazzuchelli (played by Josh Radnor), a frustrated English teacher who assumes command of his high school’s theatre department despite [1] being woefully under-qualified, and [2] the department already having a director in Tracey Wolfe (played by Rosie Perez). In fact, the only rationale given for Ms. Wolfe’s ousting is that she’s “a pain in the ass,” which is a pretty bold statement to make about someone whom the pilot presents as a caring, passionate, knowledgable educator. (Her only crime, as it turns out, is being a female character on Rise.) 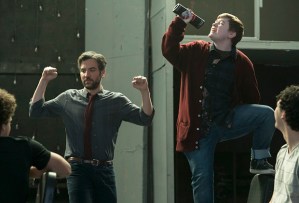 Mr. Mazzu’s first act as theatre director is to completely trash the department’s in-progress production of Grease in favor of an “out-of-the-box” idea: Spring Awakening, the musical tale of “sexually repressed teenagers coming of age in 19th century Germany.” What could possibly go wrong?!

In bringing his nightmare to life, Mr. Mazzu assembles a motley-yet-gleeful crew of performers: There’s Robbie, the school’s star football player; Lillette, an underestimated background player eager for her chance to shine; Simon, the closeted one who just wants to do right by his family; and Gwen, the entitled girl who immediately develops a feud with Lillette.

He also casts a transgender student, which I won’t make a snotty Glee reference about because it’s actually a really lovely, touching addition to the story. It also sort of makes up for the fact that Rise changed Radnor’s character from a gay man — as depicted in Drama High, the 2013 real-life book upon which the show is based — to a very straight, very married father of 8 million children.

Speaking of Mr. Mazzu’s marital status, I’d like to take a minute to honor his wife, who seems to have resigned herself to the idea that being married to this man means forcing a smile through a never-ending parade of nonsense and surprises. She’s against the idea of him running the theatre department, yet she remains calm when his rehearsal runs long and she has to cancel her piano lesson. She’s also worried that they’re losing control of their (alcoholic?) teenage son, yet doesn’t bat an eye when Mr. Mazzu brings a homeless student to live in their already-crowded house. I’m hardly surprised that this is her default facial expression:

To be fair, though, everyone on Rise has a pretty tragic home life. Lillette is constantly at odds with her mother, who’s having an affair with Gwen’s father; Simon is unable to come out to his conservative Catholic parents for fear of “embarrassing” them; and in addition to Robbie’s mom being sick, his father has apparently acquired a hot new “trophy wife,” as alluded to in his pep rally performance. Basically, you can’t catch a break in Stanton, Pa.

Actually, there is one way to catch a break: When the Powers That Be try to shut down Spring Awakening, the students gather together in the parking lot for an impromptu bonfire and sing-along. And rather than getting suspended for starting a fire on school property — among a slew of other infractions — they get their show back! 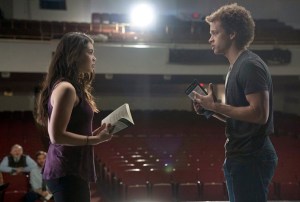 On that note (sorry!), allow me to share some burning questions I have after watching Tuesday’s premiere:

* Exactly how far along was the school’s production of Grease before Mr. Mazzu seized control? At the top of the pilot, Simon encouraged Lillette to audition, but when we went to the auditorium — which is presumably the same day — the cast is already practicing with costumes and sets.

* Another time-related question: Mr. Mazzu told Ms. Wolfe that he thought “someone would have let [her] know” that she’d been fired, but how would that have been possible, considering he went directly from the principal’s office to the auditorium?

* Does this mean we’re never going to find out the “spin” Ms. Wolfe had planned for her production of Grease? I’m actually dying to know.

* Why does every TV show think that Spring Awakening is the only “out-of-the-box” musical? In case you’ve never seen 90210‘s infamous production, you’re welcome:

* Mr. Mazzu never gave Ms. Wolfe an answer: Which part of Spring Awakening did he like most — the abortion, the teen suicide or the incest?

* Spring Awakening fans, was Robbie’s “All That’s Known” rap the most blasphemous thing you’ve ever heard? Or did you kinda, sorta like it?

* Why couldn’t the school afford Grease after canceling Spring Awakening? Hadn’t the rights already been purchased, since Ms. Wolfe was planning on doing that show in the first place?

* Why didn’t they just call this show Friday Night Spotlights?

OK, now that you’ve endured my questions about Rise, drop your own (and grade the premiere!) in a comment below.