When last we tuned into Black Lightning, Tobias made the ultimate power move by killing Lady Eve and setting Black Lightning up to take the fall. This Tuesday’s episode deals with the aftermath of Tobias’ mission to control Freeland’s underworld, while new information is revealed about both Jefferson’s father and his father figure.

In the first scene of Episode 8, Jefferson gives Anissa her first training session — testing her physical and mental capacities, and teaching her that she can’t be reactive, she has to be in control and aware of the dangers around her. Any father-daughter superhero team-ups are postponed, though, since Jefferson is wanted by the police and hated by Freeland residents for killing Lady Eve, who they hail as a pillar in the community (eye roll). He’ll have to hide his alter ego his name is cleared.

Gambi meets with Martin Proctor from the mysterious and powerful ASA (American Security Agency), which wanted Black Lightning dead the moment he reappeared. “He was a nuisance, now he’s a danger,” says Martin. Gambi tries to reason with his colleague, arguing that the metahuman should be studied rather than killed, but he’s rebuffed. Martin valued Lady Eve for her ability get Green Light on the streets faster than anyone, and says that her murder “sets the Freeland experiment back.” He adds that since Gambi didn’t take care of Black Lightning, he’s taking matters into his own hands — ASA operatives will be brought into town to kill him.

While preparing family dinner, Lynn tells Jefferson that Jennifer will be doing an unpaid internship at her lab (i.e. grunt work) since she hasn’t decided on an after-school activity to replace track. When Lynn then begins to verbalize her worried thoughts about Anissa, Jefferson stops her. He says their daughter is taking training seriously, and has her mother’s brain to help he adapt to the challenge.

At the lab the next day, Jennifer asks her mom about the recent fluctuations in Jefferson and Anissa’s relationship. Lynn tells her things are fine, but turns her attention to the box containing Alvin’s research — namely the fact that important notes are missing. When Lynn goes to the facility where she dropped off the vial of powder found in Alvin’s box, the technician says her lab was burglarized too, and that the sample was taken. Thankfully, Lynn is able to secure a hard copy of the results.

Jefferson and Anissa, under Gambi’s watchful eye, sneak into the morgue to look at Lady Eve’s body and gather more evidence. Perusing the scorched corpse, Anissa realizes that Lady Eve’s scarring is not consistent with that of a lightning strike, and that she looks like she was burned by a high-voltage flash. Gambi says that since Black Lightning has never killed anyone, it makes sense that the coroner wouldn’t know what kind of wound pattern to look for. Gambi also tells Jefferson that nuclear power was used to create the “fake lightning” gun, and (hesitantly) agrees to track radiation and find the weapon.

Jennifer goes to Garfield High to help Keisha hang up student government campaign posters. When Keisha climbs up a scaffolding to put posters where they can’t be reached, her hand slips as she climbs down. Jennifer panics, causing her eyes to glow and electricity to spark from her hands, frying her phone. By the end of the episode, Jennifer comes clean to Anissa about her powers.

The newly resurrected Lala (but how?) has Lawanda White on his mind and on his heart, literally. (Her face is “tattooed” on his chest.) After making an appearance at Club 100, he gets chauffeured by two of the gang’s members who thought he was either dead or in jail. In the back seat, Lawanda’s ghost appears and asks him what his plan is. She then berates him for being stupid enough to trust these guys, who will now know where he lives. She urges him to kill them, but he says they’re cool. The two meanwhile nervously look at each other as they hear Lala talking to himself. In a later scene, Lala is in the shower having an existential crisis when Lawanda once again appears, and kisses him. 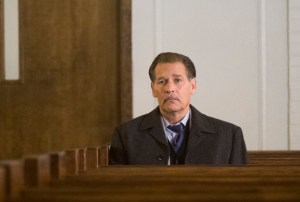 Gambi drags his feet when it’s time to track down the radiation used to kill Lady Eve, but he uses his technology to lead Jefferson and Anissa to Hampton Woods. Arriving there, Jefferson gets a call from Lynn, who reports that the sample included with his father’s research was a vaccine that has the same active ingredients as Green Light! Jefferson realizes that someone has been working on creating Green Light for 30 years, and tells Lynn to get information from Gambi.

As Jefferson and Anissa continue searching the woods, he shares that Gambi trained him in fighting and tactics before he even knew he had superpowers. (Hmm….) Once they find the “lightning” gun, Jefferson-as-Black Lightning leaves Henderson a message with the location of it (and the gunman’s shallow grace). But as they wait for Henderson, someone else arrives and blows himself up with the gun, while a quick-thinking Anissa saves her dad from getting hurt.

Lynn visits Gambi, who just had a Come-to-Jesus moment at a local church. She shows him the results of her research, but he tells her he can’t give her answers. It then dawns on her that he came to Freeland around the same time this vaccine was created, and that he has never shared details of his life before that. Cornered, Gambi decides to later tell Jefferson everything: His real name is Peter Esposito and he came to Freeland as an agent for the ASA, which gave people a vaccine to make them docile but it backfired and instead created metahumans. Gambi leaked the damning information to Jefferson’s father… which led to his murder. Effectively rattled, Jefferson tells Gambi to stay away from him and his family.