This week on The Good Doctor, Claire was confronted by her mother (Supergirl‘s Sharon Leal), while Reznick made Jared an offer he couldn’t refuse. Shaun, meanwhile, received some troubling news.

Before we get into the doctors’ personal lives, let’s briefly recap the central Case of the Week…

Melendez — with an assist from Shaun, Claire and Park — treated Hunter, the very first patient he ever had as an attending 10 years ago. Hunter was paralyzed from the chest down at the time, and returned to St. Bonaventure for what was believed to be phantom spinal cord pain. Turned out he had an enlarged mass putting pressure on his spinal cord, which somehow repaired itself over time (#MedicalProceduralMiracles). Removing the mass would be high-risk, but Hunter went through with the surgery and survived. With physical therapy, he’d one day walk again.

Hunter put his marriage on the line when he chose to have the procedure, a decision that Shaun couldn’t quite comprehend. He didn’t get why the patient, who was perceived as different because of his wheelchair, would risk losing someone who cared for him despite his handicap. Later, to get a better understanding, Shaun asked Claire if she’d ever date someone with a disability, at which point millions of crazed ‘shippers were probably foaming at the mouth. I didn’t pick up on a vibe, but maybe that’s just me. Either way, she said yes, so make of that what you will.

Dr. Browne has previously mentioned her estrangement from Mom, so it came as no surprise that she wanted nothing to do with her when she showed up at the hospital and inexplicably started singing Norah Jones’ “Don’t Know Why” to the staff. (Everyone was straight-up mesmerized, by the way. I get that she’s a singer, but the whole thing was weird.) After telling Mom to get lost, Claire gave further insight into the sorta thing that drove a wedge between them: When she was 16, she saved up enough money to buy a laptop, only to return home and discover that Mom had taken the money and run off to Reno.

Mom later returned to the hospital with flowers, hoping they could talk. She explained that she was sick and was now on mood stabilizers, and asked if her daughter would give her the benefit of the doubt. Claire eventually called her, and the two sat down for coffee. All seemed on the up-and-up… until Mom asked for some money to cover first and last month’s rent — as well as some new furniture. Claire cut her a check for $2,500, then waited until she was outside before tearing up. Some people never change. 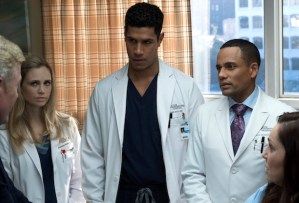 As Claire was dealing with her mother, ex-boyfriend Jared faced the very real possibility that his time at St. Bonaventure is almost up. Reznick, determined to retain her residency next year, told Jared that she’d put in a good word for him with her former mentor at Denver Memorial, to which he responded that he’s not going anywhere. While working on the case of a woman whose numerous plastic surgeries led to a fatal infection, Reznick twice let Jared take credit for something she had accomplished, yet Andrews still picked her to assist in the OR. Realizing he’d never regain the surgeon’s respect, Jared gave Reznick the go-ahead to contact her mentor.

Andrews, of course, had a lot on his mind at the time. He visited with a doctor to discuss an experimental procedure to make him fertile… which could potentially backfire and make him impotent. Isabel insisted that he not go through with it, fearing it could jeopardize their sex life when there are plenty of other ways to start a family. 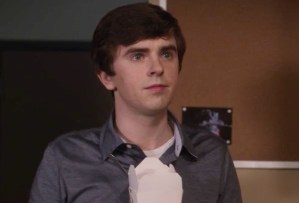 Last but not least was Shaun, who revealed in passing to Claire and Park that he paid for Kenny and his girlfriend when the three of them went to a carnival. Park then ran a background check on the next-door neighbor, who it turns out has a criminal record, including several misdemeanors and a couple of felony theft cases that were bargained down. When Shaun returned home that night, Kenny was already in his apartment, having taken $20 out of his battery drawer to buy Chinese food. He also brought over a new gaming console, which may or may not have been stolen. Shaun seemed nervous, but ultimately calmed down once Kenny introduced him to Mortal Kombat.

What did you think of “Pain”? Drop a comment below with your reactions to the episode.