Heavy. Intense. Heartfelt. Those are just some of the adjectives used by the cast of The Fosters to describe Tuesday’s 100th episode, which also serves as the first half of the two-hour Season 5B finale (airing at 8/7c on Freeform).

“It’s not an explosive episode like a lot of [our] finales and premieres,” star Maia Mitchell tells TVLine. Instead, the milestone hour “ups the ante a little bit on the emotional side.”

“What’s cool about the 100th episode is it’s a very heartfelt episode,” co-star David Lambert adds. “It’s not necessarily an ambitious episode. It’s not a big event. There’s no party. But there are a lot of really, really great scenes. Particularly, I love what Stef goes through in this episode. And overall, you get a sense of where people are starting to go, especially the kids. You’re starting to see their trajectory maybe beyond high school, where they’re going to end up. We’re dropping a lot of hints as to their interests.” For Brandon, that means “branching out” and taking a road trip with girlfriend Grace as he figures out “what he wants to do with his life.” 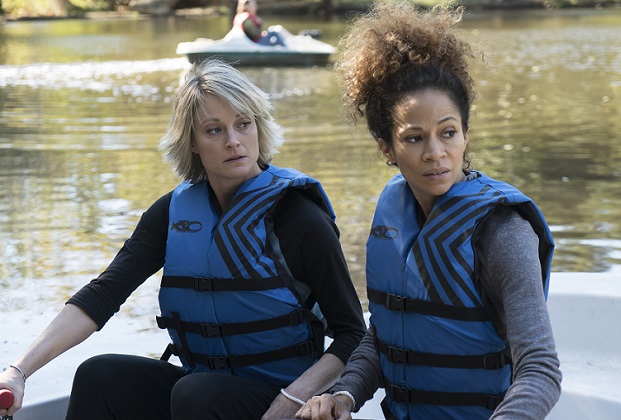 Meanwhile, Stef and Lena head to a couples retreat, where the detective faces “some of the issues that she’s been going through around her sexuality and the relationship she had with her father… and in her marriage, where communication and intimacy is important,” executive producer Joanna Johnson describes. After the weekend getaway tests their relationship, Stef and Lena “come to a bit of a reckoning, and that’s good,” star Teri Polo says. “That’s cathartic for everybody.”

“I’m really proud of that story. It’s really beautiful,” Johnson adds. Even Stef’s “kids” were blown away by the arc. “She looks [her issues] in the eyes, and she does not back down, and she embraces herself and her past, and my God, is it beautiful!” Noah Centineo raves, while his young co-star Hayden Byerly calls the moment “unbelievably brave.”

And in case you’re wondering, yes, you will definitely need tissues handy for the big installment, especially since there’s “a very emotional and sad reveal,” Mitchell teases. Her castmate Cierra Ramirez even admits to “bawling.” (Thankfully, the show’s crew was prepared for the sobfest. “For this table read, it was the first time that — at least in my experience, that I can remember — they set out tissue boxes,” Centineo notes.)

As for the second half of the finale, it’s Graduation Day… but soon-to-be grads “Brandon and Callie find themselves AWOL,” Johnson previews. “We wanted to mirror the pilot episode, where Callie ran off to find Jude, and Brandon was supposed to be at a piano competition, but he sort of gave that up to go with her. This time, it’s Callie who goes to get him so that he won’t miss a very important moment in his life.”