From the opening frames of NBC’s new drama Rise — an idyllic panorama of all-American scenery set to lilting guitar — you start to feel that familiar rush: This is Jason Katims country. The Friday Night Lights and Parenthood creator’s distinctive imprint is all over Rise, from the shaky-cam cinematography to the off-the-cuff dialogue, and if you loved Katims’ past shows, you’ll find a lot to love here, too. Whether Rise can ultimately rise to the level of those two stellar achievements, though, is still a question mark. 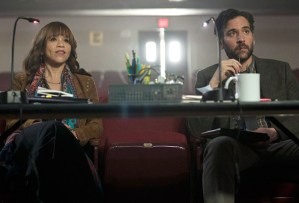 The premise of Rise — debuting this Tuesday at 10/9c; I’ve watched the first five episodes — makes it sound a lot like Glee: Josh Radnor, of How I Met Your Mother fame, stars as Lou Mazzuchelli, aka Mr. Mazzu, a high school teacher in an economically depressed former steel town in rural Pennsylvania. (See, he even has a cute nickname like Glee‘s Mr. Schue!) Mr. Mazzu volunteers to take over the school’s theater program, hoping to rescue the kids from another uninspiring production of Grease and put up the provocative Spring Awakening instead. And this isn’t just charity; Mazzu is looking to inspire himself as well. “I need this, Gail,” he tells his wife (Marley Shelton). “I need something.”

Right off the bat, Radnor’s casting will be a serious stumbling block for fans who can’t see Mr. Mazzu as anything but a Sad Bearded Ted Mosby… and I’m still not convinced he was the right actor for this role. He does have solid, head-butting chemistry with Rosie Perez, who plays rival-turned-friend Miss Wolf, the theater director Mazzu is replacing. But while he’s meant to be passionate and inspiring, Mazzu is mostly just a sad sack, moping around with his corduroy blazer and half-hearted beard. After a few episodes, Radnor’s Sensitive Male listening face begins to grate. Kyle Chandler as FNL‘s Coach Taylor is admittedly a sky-high bar to reach, but as Rise‘s resident father figure, Radnor falls decidedly short of that.

Once installed as the new theater director, the idealistic Mr. Mazzu is forced to deal with the harsh realities of hand-me-down costumes, faulty equipment and skeptical parents. (While his department is forced to pinch pennies, the school’s football team lobbies for a gleaming new Jumbotron.) But when football star Robbie Thorne (Damon J. Gillespie) busts a rhyme at a pep rally, Mazzu’s ears perk up. Despite Miss Wolf’s stern warning — “Rule number one: Do not cast football” — Mazzu recruits Robbie to play the male lead in Spring Awakening, mixing things up by pairing him with shy, angelic-voiced Lilette (Moana star Auli’i Cravalho). 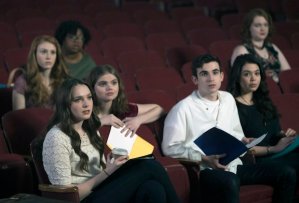 As he did on Friday Night Lights, Katims has collected a talented young cast of newcomers here. Cravalho is blessed with a soaring singing voice, and Ted Sutherland (as conflicted Christian teen Simon) and Amy Forsyth (as wounded queen bee Gwen) are impressive standouts among the supporting cast. Like Mazzu’s students, though, not all of Rise‘s young stars are trained actors, and that lack of experience ends up undercutting some key dramatic scenes. Plus, the sheer number of Tragic Backstories that Rise throws at us — Lilette’s mom is sleeping with Gwen’s married dad; Robbie’s mom is in a nursing home; Simon’s parents don’t approve of the musical’s racy content; the lighting tech (Rarmian Newton) is a foster kid who’s sleeping at school; Mazzu’s own teen son Gordy (Casey Johnson) is a drunk — is nearly overwhelming.

Katims’ delicate, humane touch as a showrunner holds it all together, though. (His shows were making us sob our eyes out long before This Is Us came along.) Rise‘s working-class setting feels lived-in and textured; we can sense the longstanding feuds and friendships that bind the residents of this town. Yes, Rise threatens to trip over its own earnestness at times, but its heart is in the right place, and the writing is admirably patient. It presents us with characters who seem at first like simple stereotypes — the macho football coach; the bitchy mean girl; the town slut — and then digs deeper to find the complicated humanity underneath.

Rise could use a sense of humor: a Landry or Crosby Braverman type, if you will, to break the tension with a goofy joke. Too often, it falls into soapy melodrama, with the musical taking a backseat. But the rehearsal scenes are packed with a rare, raw emotion, speaking to the immense communal power of the arts. (There’s an extra power right now, too, to seeing high school kids find their voices and stand up to fight for change.) Despite its flaws, Rise still delivers those goose bump-raising moments that Katims has been reliably serving up for years. Granted, it’s sappy and wears its heart fully on its sleeve… but who says that’s such a bad thing?

THE TVLINE BOTTOM LINE: Despite some storytelling stumbles, NBC’s Rise is another stirring, heartfelt entry in the Jason Katims oeuvre.