Jessica Jones doesn’t really need to drink more booze — but if she decided to up her intake after the events of the Season 2 finale, no one would blame her. By the end of the hour, she’s rescued a family from a fiery car wreck, narrowly avoided getting arrested, been irrevocably betrayed by a friend and lost her mother, for good this time.

And that would drive just about anyone to drink.

But at the start of the Season 2 finale, Alisa Jones has escaped from prison and dodged the police’s attempts to recapture her. Now she and Jessica are in a stolen RV, making their way to the border. Alisa believes that she and Jessica should work together, using their combined powers to do actual good instead of demolishing pianos and murdering detectives. (The fact that Jessica is the only person who can keep her mom’s temper in check is just a bonus.)

At first, Jessica is skeptical of her mom’s idea. But after the two of them save a family and truck driver from a grisly car accident on their way to the border, she has a change of heart. Maybe teaming up with her mom wouldn’t be so bad, even if it means a lifetime of running from the cops. 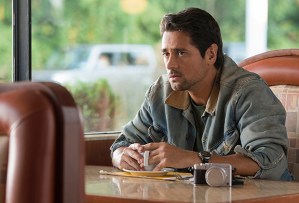 Jessica makes a quick pit stop at a roadside diner, where she meets up with Oscar to tell him she’s leaving town. She explains how isolated she’s felt her entire life and hopes that perhaps this new gig with her mom will be more fulfilling. But just as she’s about to leave, Jessica realizes that Oscar had been followed: There are cops everywhere in that diner, and they’re coming for her and her mom. Though Jessica manages to escape the restaurant unscathed — evading the cops is so much easier when you can throw tabletops at them! — Alisa knows there’s not much time until the police catch up, and she seems exhausted by the prospect of running from the law for the next few decades.

Alisa and Jessica get all the way to Westchester, N.Y., where they stop at the Playland amusement park. Jessica wants to hop on a sailboat and make an escape on the water, but Alisa has a different idea. She spies an enormous Ferris wheel at the center of the park and, after busting open Playland’s gate, heads over to the ride and turns it on. “They’re gonna see the lights,” Jessica warns her mom, who calmly responds, “Let them come. It’s good that it’s here.”

The two women climb into a Ferris wheel car and have what will ultimately be their last conversation. “I have gone as far as I can go,” Alisa tells her daughter. “Maybe I don’t have to be amazing. Maybe I just made you.” But just as Jessica begins to protest — “No, I won’t let you” — she’s cut off by a bullet that goes through her mom’s head. Jessica peers over the Ferris wheel car to see who just murdered her mother… and she spots Trish standing below, gun raised. (“I had to! I had to save you!” Trish shouts, but Jessica maintains that Alisa’s death was not Trish’s call to make, even if she did break out of the hospital to make it.)

Once the Ferris wheel stops, Jessica grabs Trish’s gun and urges her to run before the cops arrive. In the end, Det. Costa and his backup arrive to find Jessica in the car with that gun, Alisa’s body slumped to the side. “You did the only thing you could, Jones,” Costa assures Jessica, who he believes killed her own mother. “There was no other way. You did the right thing.”

Trish arrives at Jessica’s apartment a few days later, regretful but also certain that Alisa had to die for this whole ordeal to end. “It didn’t have to be you,” Jessica responds icily. “I look at you now, and all I see is the person that killed my mother.” After getting Jessica’s apartment door slammed in her face, Trish heads back to the elevator — and when a woman bumps into her, causing Trish’s cell phone to fly out of her hand, Trish catches the device at the last second… by balancing it on her shoe. So perhaps that botched procedure to give Trish powers wasn’t fruitless, after all?

But even though Jessica has broken ties with Trish and Malcolm — the latter of whom helps Jeri Hogarth get her fortune back in the finale, before teaming up with private investigator Pryce Cheng — she realizes she’s spent her entire life pushing people away. This experience with her mom, devastating though it may have been, has helped her understand that she needs to let people in. The finale, then, ends on an optimistic note, as Jessica joins Oscar and his son for dinner and recounts her eventful day of saving people.

OK, your turn! What did you think of Jessica Jones‘ sophomore finale? And Season 2 as a whole? Cast your votes in our polls below, then hit the comments with your own reviews!