ABC this Sunday night revealed — ta-da! — Deception, its new light procedural about a master illusionist who finds himself assisting the FBI (or is it the other way around?). Might this Unlikely Crimesolver Dramedy fill the Castle-shaped hole in your DVR?

Created by Chris Fedak (Chuck) and with illusionist David Kwong (Now You See Me) serving as a co-producer,  Deception stars Jack Cutmore-Scott (Cooper Barrett’s Guide to nobody watched it) as Cameron Black, an illusionist whose career hits the skids when his long-secret twin brother Jonathan is framed for vehicular manslaughter. Cameron spends a year trotting the globe in search of the peer who staged his brother’s crash/dead body swap, until he notices in a TV news report that an FBI crime scene has replicated one of his grand illusions.

Cameron arrives at the airport hangar where an FBI jet seemingly exploded, with a key cartel player inside, where he meets Agent Kay Daniels (Billions‘ Ilfenesh Hadera) and her magic-loving partner Mike Alvarez (Prison Break‘s Amauro Nolasco). Cameron’s theory that the jet didn’t blow up but was the subject of a “deck flip” is met with warranted skepticism, until he reveals the hidden door through which the real plane was whisked away amid the distraction created by smoke grenades. 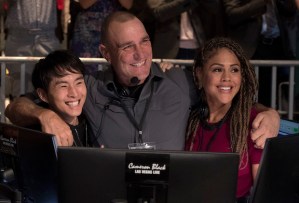 With the mild disapproval of Daniels’ boss (played by Homeland‘s Laila Robins) — and with the assistance of his “magic team” (played by Galavant‘s Vinnie Jones, Being Human‘s Lenora Crichlow and Dr. Ken‘s Justin Chon) — Cameron hangs around as an observer, proving himself handy at warming up would-be snitches and, to a greater degree than we the viewers perhaps actually thought, impersonating a cartel banker. But after proving the efficacy of his disguise, Cameron draws out the “blown-up” cartel member and leads him on a seemingly wild, seemingly blindfolded drive through the streets of New York, until the baddie winds up cornered. There, he confesses who was behind the jet’s “vanishing” — the same, odd-eyed beauty (Mr. Robot‘s Stephanie Corneliussen) who framed his brother.

At episode’s end, Daniels delivers to Cameron the deck of cards that was, in keeping with his own Disappearing Plane trick, left behind at the scene. Inside is a cell phone, which proceeds tp dial the Mystery Woman. She hints at a long-stewing agenda involving both Black twins, but Cameron has a trick up his sleeve as well — deducing which foreign airport terminal she is calling from. “Keep looking over your shoulder,” he warns her.

Did Deception sufficiently dazzle you? Are you curious about its next trick?