Warning: The following contains spoilers from the Season 2 finale of Amazon’s Sneaky Pete.

Sneaky Pete‘s latest cliffhanger doesn’t involve Luka or another Big Bad. The second season of Amazon’s con-man drama, which was released on Friday, closes with Julia on the verge of discovering that Marius is not actually cousin Pete. This, of course, is unbeknownst to Marius, who is currently making the drive back to the Bridgeport where he hopes to keep the Pete con alive and remain a part of the Bernhardt family.

Marius doesn’t have any other options at the moment. After Luka and Frank are killed, the confidence man thinks he’s walking away with an $11 million payout to disburse among his fellow con artists, only to discover that Maggie has taken the money and burned it in a tub full of sulfuric acid, forcing a dying Luka to watch as his fortune melts away. Maggie then skips town with the real Pete, affording Marius the opportunity to stay put. As a parting gift, she leaves Carly a stack of old letters from Lila, prompting her niece to confront Audrey about what really happened to Mom and Dad.

Below, showrunner Graham Yost breaks down the Season 2 finale and its impact on a potential Season 3, then explains why it was too soon to bring back executive producer Bryan Cranston’s villainous alter-ego Vince. 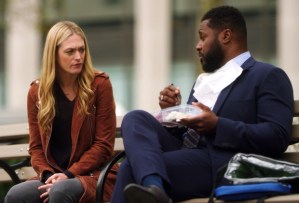 TVLINE | Was it always the plan to have Julia confront Bagwell at the end of the season, and to potentially discover Marius’ secret?
We talked about that pretty early on. It makes the family seem stupid if they don’t start to figure this out… They’re bail-bonds people. They’re used to criminal B.S. and sniffing that out… and we thought it was best if it was Julia who figured it out. It also gave us an excuse for another scene with Malcolm-Jamal Warner [as Bagwell], who is just a great guy to work with.

TVLINE | Is there still a show once the entire family becomes privy to Marius’ true identity?
It’s central to the premise, and the question is, if Julia finds out, is she the only person who finds out? … There’s also a possibility, by the way, that Bagwell doesn’t tell her, so that’s something for the writers’ room to [discuss].

TVLINE | Does Maggie really feel for Marius when she lets him “have the family,” so to speak, or is this her way of making it up to him for destroying Luka’s money?
I think she really does feel for him. She says to Marius something to the effect of, “Your big mistake was not believing me, because I did what I said I was going to do and return the money to Luka,” just not in the way Luka wanted! [Laughs] But I think she truly came to care about Marius. People would say that there is no such thing as a psychic, but you can say people are attuned to what other people are feeling, be it through their behavior, how they dress, how they walk… that’s a gift that she has. One of my favorite lines is when she tells Marius, “Your trick is that you just don’t care,” and what that implies is that she does. So I think she really means it. She’s giving Marius the family, and she and Pete have to hit the road. 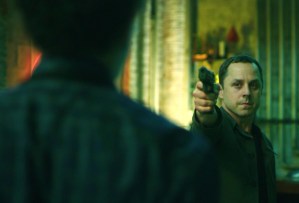 TVLINE | Marius is a con man, but not a killer. Yet at one point in the finale, he points a gun towards Luka and is willing to pull the trigger.
We wanted to play with the idea of how far he would go, both to protect the family and to protect the $11 million — and you’re never really sure what’s driving him [in that moment]. At one point, Porter says, “When you go for something as big as $11 million, you can make mistakes… but Marius, you almost killed a man,” and that’s crossing a line.

We never were going to have him pull the trigger, but we had him come real close. It was [executive producer] Fred Golan, when writing that scene, who figured out how to get the gun away from him and orchestrate it so Marius never really had a chance.

TVLINE | The Season 2 finale forgoes introducing another Big Bad. Why is that?
We felt it would be more interesting to… have a character-driven cliffhanger. It’s the existential threat to Marius and what he wants. He still wants to run cons because it’s all he knows how to do, but he’d really like to be a part of this family. Maybe his cons would just be in service of tracing skips, or helping Taylor out with the bail-bonds thing in Hartford, whatever it’s going to be. Maybe that’s on his mind, but we know he’s heading for something a little darker, and we thought that was a good cliffhanger. 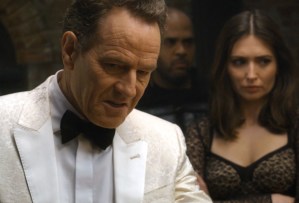 TVLINE | Speaking of Big Bads… Bryan Cranston is noticeably absent this season. Did you ever consider bringing Vince back, if only for a cameo?
It was considered. There was something we were thinking of doing in the final episode, but then we decided that we didn’t want to hamstring Season 3 with that. If we had, it would have accelerated the pace of the whole series a little too fast. So it did become a conscious decision to not have Bryan in it.

TVLINE | Will we finally get to the bottom of what happened to Carly, Julia and Taylor’s parents in a hypothetical third season?
I’ll be really honest: When the season is over, we don’t think about it. We’re not yet gearing up to try and solve the question of what happens next, but I would guess that Carly and the true story of what happened to her parents will be in Season 3, if there is such a thing.

What did you think of the Sneaky Pete finale? And how did you enjoy Season 2 overall? Grade both via the following polls, then hit the comments to flesh out your thoughts.