It’s time to get Hetty, folks.

This Sunday on NCIS: Los Angeles (CBS, 9/8c), the team goes all in on its off-book mission to find their badass boss (played by Linda Hunt) and bring her home. To that ambitious end, NCIS works with Hetty’s old crew — Sterling Bridges, A.J. Chegwidden and Charles Langston — to get the dangerous job done.

Eric Christian Olsen spoke with TVLine about the NCIS: LA cast’s own desire to reunite with Hetty/Linda Hunt, the perils of faking a monsoon and the very “heavy” episode coming up later this spring.

TVLINE | The fans have been somewhat patient this season, waiting for the team to rescue Hetty. Will it be worth the wait come Sunday night?
As far as patience goes, I think that as much as the audience wants her back, we as a TV show and we as her fellow actors and we as the characters inside the show want it twice as much. She is the anchor of the show, and I think that’s evident when we see episodes without her. And so for every reason in the book, that’s why this episode is so fantastic, because we finally get a chance to band together. Everybody in her life that has mattered to her and values her goes on this non-sanctioned mission to bring her home, by all means necessary. So I do think it’s a payoff that’s worth the wait — even though the wait was awful. 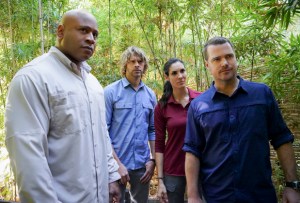 TVLINE | What sort of obstacles will the team bump up against in the process of finding and rescuing her?
Well, because it’s non-sanctioned, we can’t even get weapons into the country. And we don’t know where she is; we know she’s being held hostage, and we know that her ex-Special Forces team from her Vietnam days are over there. We meet up with Bobby Lee (playing Rio Syamsundin/Jeff Carol), who notoriously had been working with the FBI and the CIA and who’s also a gun runner. The obstacles are massive, but through all these relationships of Hetty’s in the past, we bring back some of these great characters to make this thing happen. And there’s a tiger, for God’s sake! Terrified me to all ends. And it was no CGI tiger. It was a frickin’ tiger!

TVLINE | What’s the short-term fix for the weapons situation? Sharp sticks?
No, they have to find weapons in Vietnam, so you’re pulling weapons from 40, 50, 60 years ago — AKs brought in from Russia or from when the French were in there.  It’s a free-for-all to find the right weapon. But that just shows you that when you talk about motive, it doesn’t matter. These guys go in with no weapons, because that’s how much they value Hetty.

WATCH A TRAILER FOR THE HETTY RESCUE EPISODE:

TVLINE | Are there any particularly big set pieces?
There was one day that we were shooting out in the middle of nowhere, on the Vietnam set, and when you do rain, usually they use rain towers. But the rain towers were not powerful enough to get the monsoon look, so they used actual fire hoses of cold water and just shot them at us! [Laughs] Of course, wardrobe is like, “Don’t worry, everything’s waterproof.” Well yeah, unless you’re bring directly hit from water at six different angles at once! Yeah, there’s some pretty magical shots of us — you see it in the trailer (above) — going through the swamp in a downpour, and we’re all freezing.

That’s a pretty big set piece for a 12-hour day in the middle of nowhere. You go do a movie in the summer and it’s one-eighth of a page and it’s one stunt. On our show, we have that same exact same stunt — a car flips over, something blows up, a helicopter lands and we jump out — and we’ve got to get that done by 10 am. Because we’ve got another eight pages after that. It’s run-and-gun. 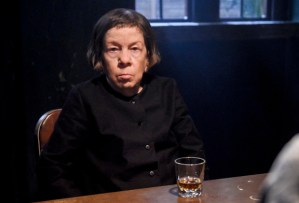 TVLINE | What are you allowed to say as far as Hetty’s future? Assuming the team is able to rescue her, will we be back to business as usual back home? Or might she take this as a cue to retire to the South of France?
Listen, this is who she is. It’s her identity. There’s always this romanticized version of what we want to do “after work,” but her work is so deeply embedded and ingrained in who she is that this is her. She’s going to do this — hopefully forever. And I say that not only as a character but as an actor on the show. Everything is better with Linda Hunt, and everything is better with Hetty Lange.

TVLINE | Lastly, whats the early buzz on this season’s finale?
I haven’t heard anything about the finale, but I’ve heard about the second-to-last episode which is a freight train. Like, it’s so good. It’s a deeply personal story, and you don’t see any of it coming. That’s what I love most about some of the movies that were up for awards this year, that I was constantly surprised where the plot went and where the characters went. Somebody must have been watching those movies, because in that second-to-last episode we have continuous turns that I did not see coming, from an emotion, character and plot standpoint. It gets heavy.