The following contains spoilers from this Thursday’s episode of CBS’ Mom.

Christy’s near relapse on last week’s Mom turned out to be a red herring.

Thursday’s episode of the CBS sitcom introduced Jill’s inner-strength coach Miranda, who was played by none other than Allison Janney’s former West Wing costar Kristin Chenoweth. Her visit culminated in Jill, not Christy, falling off the wagon. 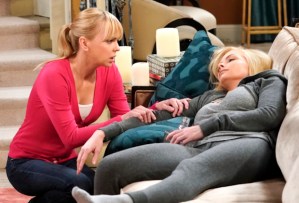 The slip-up occurred after Miranda gave Jill some rather bad advice, not taking into account that her client was both a food addict and an alcoholic. Speaking only to her struggles with overeating, Miranda told Jill that she had the power to “take a bite and push the plate away.” By the end of the episode, Jill grew overly confident in her power and poured herself a stiff drink, thinking the same logic could be applied to alcohol.

Marjorie was the first one to acknowledge that Miranda’s advice was a detriment to Jill’s recovery. She politely explained that admitting you’re powerless is the first step in AA, but her concerns fell on deaf ears. The rest of the group had grown too fond of Miranda to pick up on the fact that she wasn’t doing their friend any favors. She inspired Wendy to unleash her inner voice (which was far too loud), and helped Bonnie open up about her abandonment issues.

Christy, who was the first one to fall under Miranda’s spell, reaped the benefits of a $500 (!) energy cleanse. She built up the courage to follow up with one of the many law schools that rejected her, and found out that she stands a chance at being admitted the following year if she retakes the LSAT and gets her grades up.

In the end, Miranda apologized to Jill, but Marjorie told her it wasn’t necessary: “You can’t make someone get sober, and you can’t make them drink.”

What did you think of this week’s Mom? Were you surprised to see Jill break from sobriety, or did you half-expect it after Marjorie grew concerned? Hit the comments to share your thoughts about the episode.