How to Get Away With Murder won’t officially wrap its fourth season until next week — but the ABC drama didn’t wait until its season finale to pack in some serious plot twists.

On the contrary, Thursday’s penultimate installment was among Season 4’s most bonkers, featuring a (potentially major) death, a crucial development in the Caplan & Gold saga and the return of Wes. (In flashbacks, at least.)

Here’s what went down in the eventful hour:

BYE-BYE, BON-BON? | Once Laurel discovers that her mom had met with Wes the day before he died (and said some highly unflattering things about her daughter, like Laurel’s desire to “fix” the men she dates), she and Frank visit Sandrine and grill her about the meet-up — much to Bonnie’s chagrin. If Bonnie had her druthers, Frank and Laurel never would have met with Laurel’s mom, at least not without Annalise knowing about it first.

Later, Frank gets a suspicious alert on his phone that there’s been some kind of mechanical error found in Bonnie’s car. He does a thorough…ish inspection of the vehicle and tries to reassure Bonnie that everything will be fine, but she remains skeptical. For all she knows, Sandrine and Jorge Castillo conspired to mess with Bonnie’s car, and she’s about to ride around Philadelphia in a death trap. But no, Frank says. Everything will be fine, Frank says.

But at the end of the hour — after doing some sleuthing and discovering that D.A. Denver has Laurel’s hard drive — it seems Bonnie’s suspicions about her car may have been correct. The last time we see her, she’s driving over to Annalise’s hotel, simultaneously leaving Annalise a voicemail that Denver’s got the hard drive and “he’s playing both sides.” 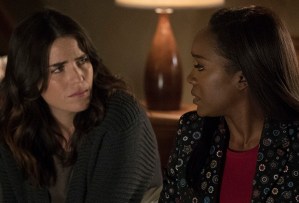 Then, in the episode’s final minutes, Annalise gets a call from Nate immediately after receiving Bonnie’s voicemail. “There’s been a car accident,” Nate informs Annalise, as the scene pans to an overturned car in the road and a body bag being moved into the coroner’s van. But even though literally every sign points to Bonnie being the victim of that accident — not just her faulty car, but the fact that Denver called Jorge earlier in the hour and told him to “take care” of Bonnie — we don’t actually see her body at the scene. And until we catch a glimpse of Bonnie in a cooler at the morgue, I’m not entirely convinced that she met her demise in this episode.

* After blackmailing Denver into telling her who killed Wes, Laurel gets her hands on her mom’s phone records and learns that Sandrine did receive Wes’ ominous voicemail on the night he died. (You know the one: “It’s Christophe, I’m in trouble,” etc.) And not only did Sandrine get Wes’ message, but she called him back immediately and tried to help him with his legal trouble. But when Wes ultimately hung up on her, Sandrine called Jorge and told him to “do something” to stop Wes from going to the police. Cue that grisly shot of Wes’ burnt corpse on the table, yadda yadda yadda.

Horrified that her mother was involved in Wes’ death after all, Laurel confronts Sandrine and tears into her for helping murder the love of Laurel’s life. “My baby is going to grow up without a father! And why? So you could have more money?!” Laurel screams, looking like she just might strangle her mom — and judging by the dramatic teaser for next week’s finale, it’s possible Laurel did actually strangle her mom. 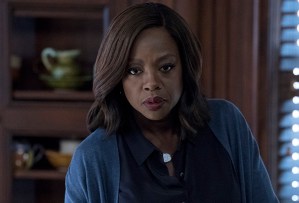 * When Simon wakes up from his coma, Annalise and her students panic that he’s going to remember the Caplan & Gold party and reveal what really happened that night. At first, Simon doesn’t seem to recall anything — only that he came out to Oliver, which is a relief. But more and more details begin to come back to him, and just before he’s able to make a statement to the detectives, Annalise convinces him to remain silent about what he remembers from the party.

In exchange for staying mum, Simon will get an S visa, which the government grants to whistleblowers… and even though his brain is still playing catch-up, Simon is wise enough to take Annalise up on the deal, swiftly firing Tegan Price as his lawyer and redacting any memories he had of seeing Laurel at the Caplan & Gold soiree.

* Still racked with guilt over her infidelity in D.C., Michaela confides in Connor and Laurel, who give her conflicting advice about whether to tell Asher she cheated. (In a shocking turn of events, Connor is the one who encourages her to tell the truth.) But just when Michaela works up the nerve to confess what she did, Asher reveals that he already figured it out — and he’s pissed. “This wasn’t a mistake, Michaela!” he shouts. “This was you stabbing me in the heart!”

* Annalise visits Isaac in the hospital, where he’s recovering from his overdose, and the conversation is way less volatile than their last chat. They both admit they had romantic feelings for each other, and Isaac confesses that, even though Annalise did hurt him along the way, he’s the only one responsible for overdosing — and he’s ready to give up on living. “This is the last time we can see each other, Annalise,” Isaac says sadly, leaving Annalise to sob in the hallway.

Your turn! What did you think of Thursday’s penultimate Murder? Theories on what will happen in the finale? Drop a comment below!